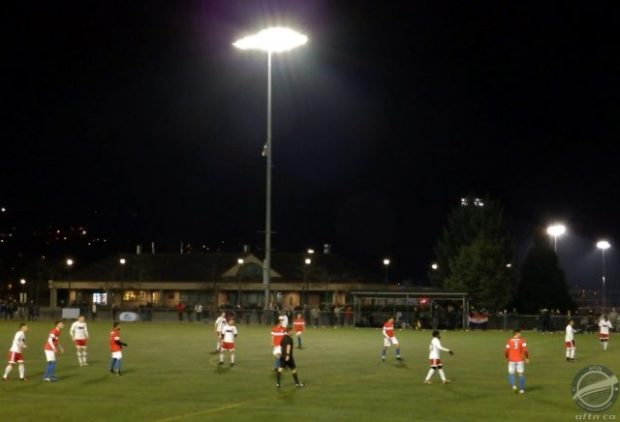 Another action packed weekend of Vancouver Metro Soccer League (VMSL) matches is in the books, with a lot of goals and drama served up across the Premier Division.

By the end of it, defending champions Croatia SC had increased their lead at the top of the standings as their two nearest challengers both dropped points, but there’s still bound to be a lot of twists and turns in the title race to play out before the end of the season.

The weekend’s action got underway at Burnaby Lake on Friday night with a pair of matches.

Kicking it all off was the battle between bottom side ICSF Columbus and SFC Pegasus. 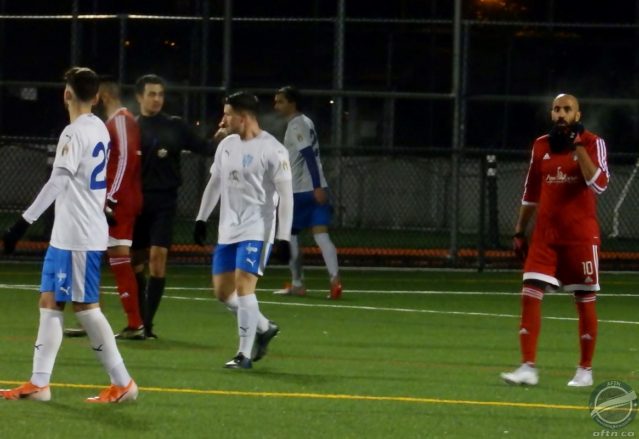 Columbus picked up a point for the second straight week in a 2-2 draw, but still sit nine points from safety at the foot of the table and are still looking for their first win of the season.

They produced a stirring fightback in this one though after heading in to half time two down. Kerman Pannu opened the scoring for Pegasus in this one eight minutes in and the Horsemen had the chance to double their lead seven minutes later but missed from the spot.

The Surrey side eventually got their second a minute before the break through Chetan Jhooty, but their lead was reduced back down to one nine minutes after the restart when John McEown pulled one back for Columbus.

That was looking like how it was going to finish before Marcello Caporale grabbed a dramatic late equalizer with four minutes remaining.

And there was almost more drama in stoppage time when Pegasus’ Jhooty pulled an effort just inches past the post with virtually the last kick of the game.

The Burnaby complex was also the venue for the VMSL Premier Division Match of the Week, the top of the table clash between leaders Croatia SC and second placed Rino’s Tigers. 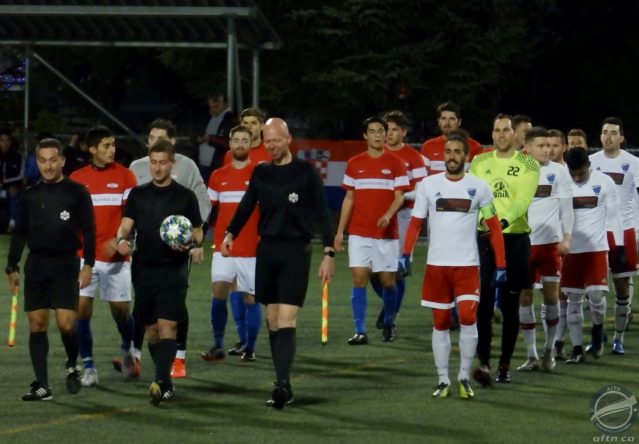 The teams had met on the opening day of the new season, with Rino’s coming away with a narrow 1-0 win thanks to a late Farivar Torabi winner. We were expecting another close contest and weren’t left disappointed in an entertaining encounter that saw the leaders, and defending champs, Croatia come away 1-0 winners, in what could prove to be a huge victory come the end of the season.

Both teams had their chances in the first half, but weren’t able to capitalize on them and the teams headed in to the break scoreless.

Croatia were looking the more dangerous side, with Rino’s best chances coming on quick counters.

Both teams were coming close to breaking the deadlock, with Croatia having a 63rd minute goal ruled out for offside and Torabi being left frustrated six minutes later when he bore down on goal, rounded the advancing Croatia keeper, only to see his effort crash off the right hand post.

The breakthrough finally came for Croatia in the 75th minute when Emile Saimovici fired home his fifth of the season and what was to prove to be the match winner, moving Croatia four points clear of Rino’s, who finished the weekend joint third.

You can watch the whole match on You Tube HERE or you can just watch our video highlights below.

Coquitlam Metro Ford Wolves continued their good run of form on Friday night, making it four wins on the bounce with a 3-0 victory over Club Inter EDC Burnaby thanks to goals from Kyle Jones, Juan Sanchez, and Justin Wallace.

The big winners of the weekend though were national champions CCB LFC United, who demolished Guildford FC FASA 9-1 at Newton Athletic Park on Friday.

CCB didn’t get off and running until the 28th minute, when Kristian Yli-Hietanen put them ahead, but after that there was no looking back. A FASA own goal made it 2-0 in the 34th minute before Elie Gindo made it three two minutes later. Boris Si then scored from the spot in the 41st minute to send the Surrey side in with a 4-0 lead.

Ibrahima Basse pulled one back for FASA a minute after the restart, with his fifth of the season, but it was just to be a brief respite before the Matteo Polisi show took centre stage.

The SFU man hit four goals in the 59th, 67th, 68th, and 79th minutes, the first from the spot, before Yli-Hietanen grabbed his second of the night to round off the scoring two minutes from time.

The victory moves CCB into a strong position as they battle for a Provincial Cup berth, as they look to retain their crown, while Guildford are six points adrift in the relegation places.

Just above them in the standings are NVFC Norvan, who went down to a 2-1 loss to BCT Rovers Hurricanes at Fen Burdett Mahon Stadium on Saturday afternoon.

Harpreet Khakh put the Hurricanes ahead in the 20th minute before Norvan’s Ethan Duggan was sent off just past the half hour mark for denying a goalscoring opportunity. Nick Soolsma then immediately doubled the Hurricanes’ lead.

Yigal Bruk pulled one back for ten man Norvan in the 58th minute, his seventh of the season, but they couldn’t stage a dramatic fightback and the Hurricanes saw out the match and claimed the three points, remaining four points behind leaders Croatia in joint third.

The final Premier match of the weekend took place at Burnaby Lake on Sunday evening, as West Van looked to keep the pressure on Croatia and move back to within one point of the leaders. Burnaby Selects White Eagles had other ideas however and the two teams played out a six goal thriller.

A Keith Jackson goal in the 12th minute and an Eoin McCormack effort six minutes later had to Amblesiders sitting pretty up two goals, but the White Eagles fought back, reducing the deficit to one through an Alex Roe goal seven minutes before half time.

Roe then levelled things up in the 65th minute, only for McCormack to restore West Van’s lead immediately. The White Eagles had another push in them and rounded off the scoring when Samuel Lee made it 3-3 in the 84th minute.

So all of that action left the VMSL Premier Division standings as follows after Week 12. 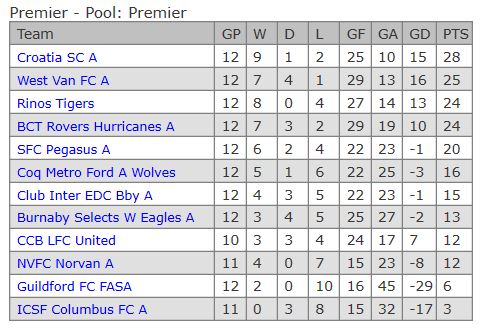