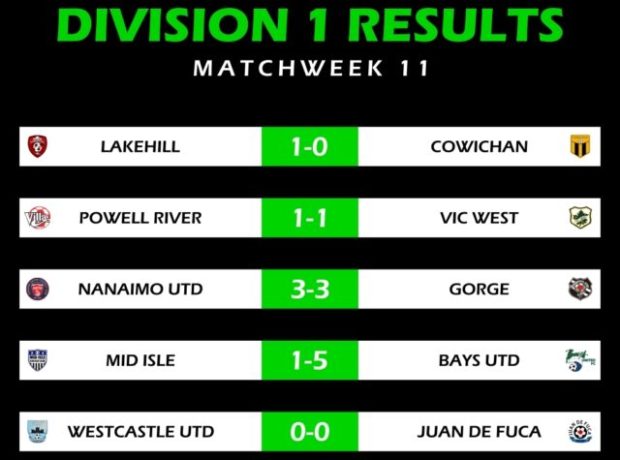 The top flight of Vancouver Island’s amateur soccer wrapped up another weekend and it served up a couple surprises to say the least, with VISL Division 1 continuing to show its parity over the year.

The action started Friday night as top of the table Lakehill took down five time defending champs Cowichan FC 1-0. The only goal of the game came from Jon Shah, with Hardeep Gahunia earning the shutout in what could prove to be a massively important victory for Lakehill.

Saturday started with a tightly contested match at Timberlane Park as hosts Powell River battled to a 1-1 draw with Vic West. Riley O’Neil scored a first half goal for the visitors, with Powell River levelling things up before the break thanks to a goal from Richard Murphy.

Another game for Gorge, meant another draw. Still staying undefeated, but dropping two more valuable points. Merle Logan turf was the venue as Nanaimo scored very late to earn the single point in an entertaining 3-3 draw. Gorge’s goals came from Brennen McCleary and a brace from Zakaria Bougraine, while Nanaimo had a goal by Caleb Nwameme and a brace of their own from Andres Algarin.

Long time leaders Bays United moved back up to second when they took out home towners Mid Isle 5-1 in Ladysmith. Bays’ goals were scored by Alex Redpath, Rhys Foster, Leo Nakabayashi, Ian Whibley, and a Mid Isle own goal with the single counter for the home side coming from Miguel Banting.

So after all the scores were entered, here are the up to date standings after Week 1: 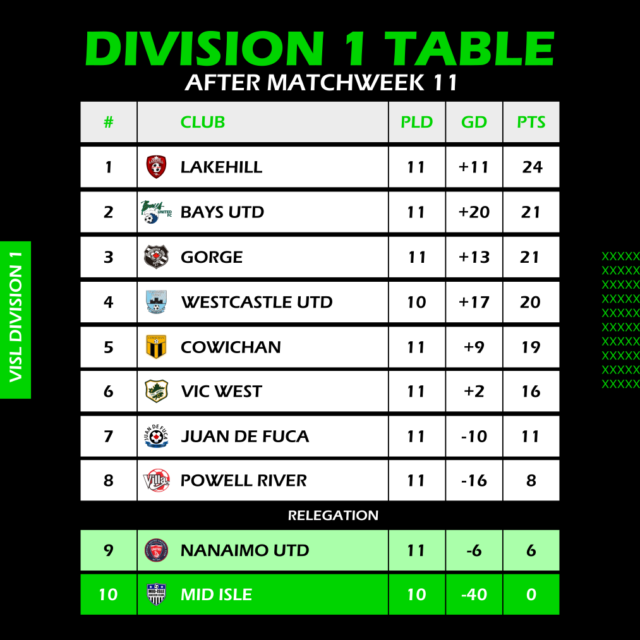 Lakehill opened their lead up to their largest at any point this year. Bays, Gorge, Westcastle, and Cowichan are close by and all are within two points of each other. Westcastle also have a game in hand against Mid Isle.

Nanaimo and Mid Isle are in the relegation zone, with Mid Isle still looking for their first points of the year, but still only eight points away from safety.

The Golden Boot leaderboard has had a shift, but still has Blaze Roberts at the top of the heap.

There’s how those standings look, keeping in mind that Zakaria Bougraine from Gorge is also sitting on 8 goals. 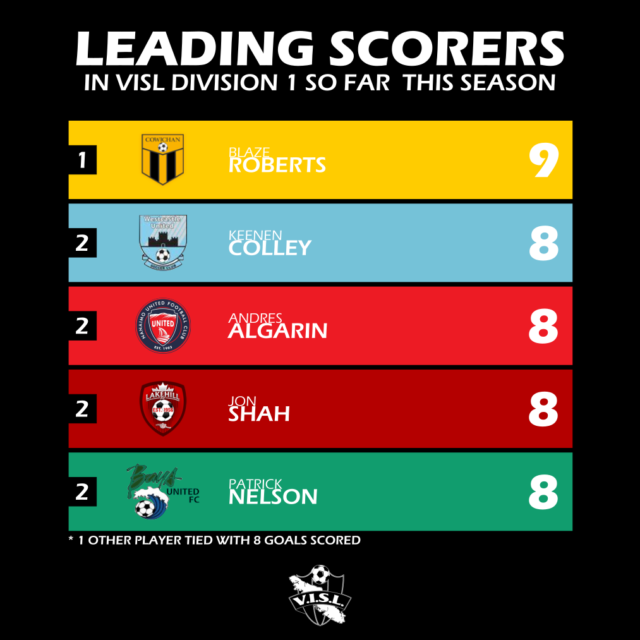 So another weekend that has many still confused, especially with all the draws that teams are playing to. No doubt, it is the highest amount that we have seen in the VISL in many years.

Three separate teams have five draws, with another team having six. With the amount of points that teams have dropped as a result, you just know they will come back to haunt one of them later on in the year.

But Week 12 will soon be upon us, and this weekend is being called separation weekend! This Friday could be very dismal for several teams as they go shopping for the Garrison Cup.

The top five teams are playing the bottom five teams this weekend, so teams will either do what “they are supposed to do” and defeat the lower ranked opponent – or the lower ranked team will do what has happened so many times this year – defeat or draw the higher placed team.

Friday starts off with newly promoted Juan de Fuca travelling the Malahat and going to Sherman Rd turf to face Cowichan. The Westshore boys will be in tough as Cowichan will look to rebound from their loss last weekend and get their sixpeat dreams back on track.

If JDF gets the same result as last week, it too will be worth celebrating as it might solidify them remaining in Division 1. For Cowichan, it could be the end of the line as they look to gather their 6th straight Garrison Cup – something that has only happened one other time in the 120+ years of the VISL.

Friday will also see Bays Utd hosting Nanaimo, but it will be at Westhills as there is a small issue with the playing field at Oak Bay High School right now.

Nanaimo are in the relegation zone, and will be hungry to get out of it. Judging by last weeks result against Gorge, it would appear that they are starting to click and players are coming off the injury list. This should prove to be a tough match, and while there is great distance between the two teams in the standings, I am pretty sure the game itself will be a battle.

Friday will also have Lakehill hosting Mid Isle at Braefoot Park. The Division leaders versus the last placed team.

No doubt the game should go a certain way, but stranger things have happened. It will take a special effort from the Mid Isle group if they are to take out the Reds this weekend though.

Saturday will see Gorge FC host Powell River Villa at Hampton Park. Gorge being undefeated and Villa being newly promoted. Both teams have a stack of draws and both will be desperate for the full three points. A Gorge win puts them back in the top spot conversation, and a Villa win helps them in the relegation zone, opening up options for themselves.

On Saturday, the division closes out with Vic West hosting undefeated Westcastle at Finlayson turf. On paper, the young kids from the Westshore should handle the storied green team from Vic West.

Vic West have come down after their electric start, and have struggled of late, while Westcastle seem to struggle against teams that park the bus. Tactics will be paramount, and the result will come from which team is better prepared and execute their game plan.

Here’s the full slate of matches. 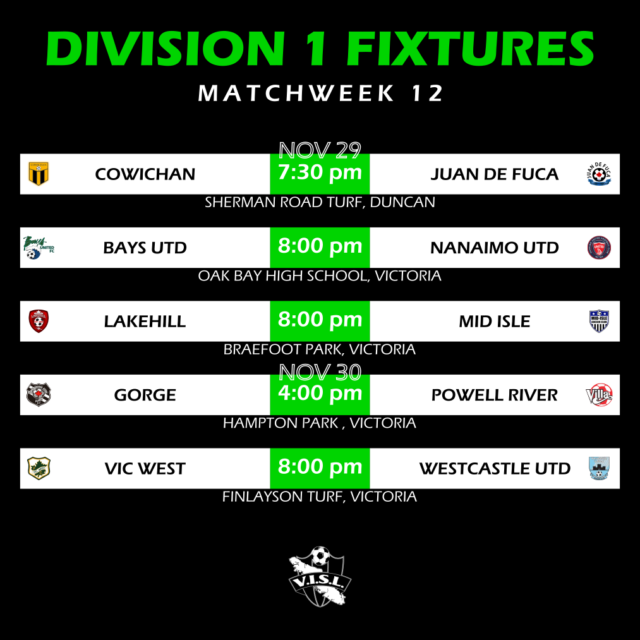 So many things could happen this weekend. What script will play out? Head out to a match, find out, and enjoy some local grassroots soccer.