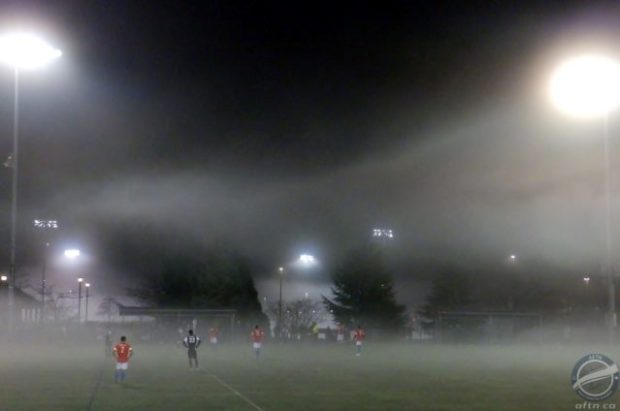 It was all change at the top once again in the Vancouver Metro Soccer League (VMSL) Premier Division standings as the season reached the midway mark this past weekend.

Defending champions Croatia SC are the team out on top after last week’s league leaders, Rino’s Tigers, faltered at home, but there’s just one point separating the top three now as the second half of the season gets underway this weekend with some cracking matches in store.

The relegation contenders are starting to look clearer every week, with Guildford FC FASA and ICSF Columbus looking to be the favourites for the drop unless they can turn their fortunes around quickly.

The battle to secure one of the six Provincial Cup spots is also looking tight, with ten teams realistically fancying their chances of doing just that, which could make for an even more contested Imperial Cup than usual next year.

All in all, it’s been an exciting and entertaining first half of the 2019/20 VMSL season, with the promise of an even better second half coming up.

The week 11 action got underway with a pair of matches at a foggy Burnaby Lake on Friday night, and a feisty affair between ICSF Columbus and Club Inter EDC kicked things off. 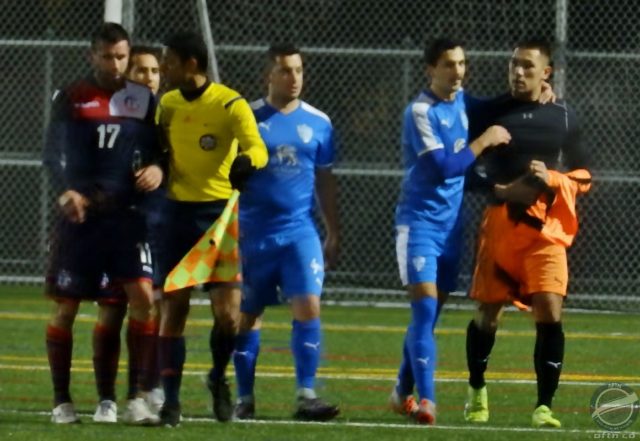 The drama kept coming right to the end in this one, but both sides had to settle for a share of the spoils after a 2-2 draw.

Rizal Ganief got Inter off the perfect start in the 16th minute and when Marco Visintin doubled Inter’s lead 15 minutes later, it was looking good for the midtable side.

Columbus are still looking for their first win of the campaign after being promoted last season and they got themselves back into this match on the stroke of half time through Naoya Inoue.

The division’s bottom side then levelled things up through Mark Baldisimo in the 70th minute before things boiled over in stoppage time when a clash in the box saw both Inter’s Visintin and Columbus keeper Kevin Monk receive straight red cards.

There wasn’t enough time for either side to capitalize and both teams had to settle for a point apiece.

While that game was playing out, Croatia SC took to the field for a battle with Guildford FC FASA. 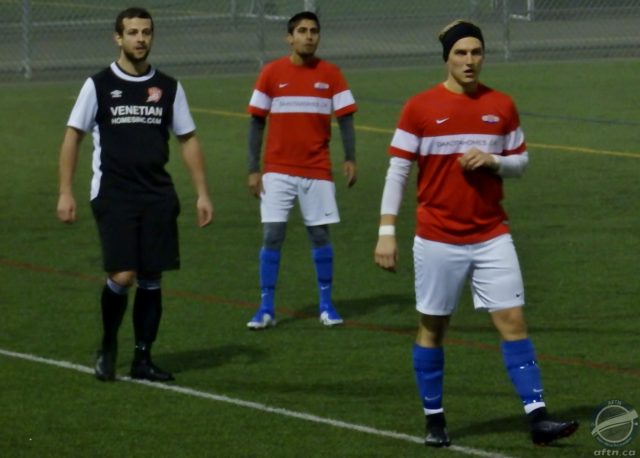 Croatia were made to work hard for their 2-1 victory over the relegation threatened FASA, who continue to play some nice football, start strong, but seem to run out of some steam towards the end of matches.

It was end to end stuff in the first half, and it was Guildford who took the lead 14 minutes in when Croatia’s keeper came out for a through ball but Brandon Bangambee got their first and fired home a fine opener.

FASA held their lead into the second half before Croatia’s Malamura brothers turned the game around, as the defending champs turned up the heat.

David Malamura fired Croatia level in the 54th minute, and his brother Mark put them ahead 13 minutes later for a lead they weren’t to then give up.

Here’s some of our highlights from the match, the quality of which varies in the foggy conditions!

That victory sent Croatia back to the top of the VMSL standings, but West Van had the chance to leapfrog right back over them at Newton in the last game on Friday night when they travelled to Surrey to take on national champions CCB LFC United. And it was another cracker with late drama.

Eoin McCormack had put the Amblesiders ahead in the 14th minute and that was how it stayed until late in the game when Caleb Clarke fired CCB level with eight minutes remaining.

As the match headed into stoppage time it looked like both teams would have to settle for a point but there was a lot of drama still left to be played out. Kristian Yli-Hietanen put CCB ahead in the 90th minute, only for Andrew Milne to then put away a 93rd minute equalizer for the 2-2 final score.

2-2 tie against West Van FC tonight at Newton, unfortunate to give up the tying goal in the 93rd min but a great battle. Goals were scored by Caleb Clarke and Kristian Yli-Heitanen. #vmsl #unitedwestand #welcometothedarkside #darkness #soldyoursoul #goodfellas #winning #BB5 #youngking #dedicatedtoBrandon

Rino’s Tigers headed into the weekend as league leaders and had the chance to leapfrog Croatia if they could see off the challenge of Coquitlam Metro Ford Wolves on Saturday afternoon at Trillium Park.

Metro Ford had the better of the first half chances on the counter, but the teams headed into the interval scoreless. That changed four minutes after the restart when Wolves’ leading scorer Carlo Basso directed a fantastic diving header past the Rino’s keeper for the opening goal and his eighth of the season.

The Tigers roared back and the VMSL Golden Boot leading Farivar Torabi made it 14 for the season when he headed home a 76th minute equalizer which the Metro Ford keeper should have done better with.

Rino’s pushed for the winner, but it was to come from the Coquitlam side instead when Justin Wallace showed great composure in the box to make room to fire home a dramatic 90th minute goal that made it three wins on the bounce for Metro Ford and shock the Tigers.

You can see highlights from the match in the video below.

Saturday’s other game saw a five goal thriller in North Vancouver as SFC Pegasus saw off NVFC Norvan 3-2 thanks to goals from Azad Palani, Kerman Pannu, and Yassin Essa. Luke Moger and Merlin Fisk were on the scoresheet for Norvan.

The final match of the weekend took place at Burnaby Lake on Sunday as fourth placed BCT Rovers Hurricanes had a chance to move to within two points of the top. Burnaby Selects White Eagles had other ideas, however, and the teams played out a 2-2 draw that left the Hurricanes four points off the pace and winless now in three matches.

All the goals came in an eventful first half. Nick Soolsma set the ball rolling seven minutes in before Vladyslav Matlash tied things up for the White Eagles nine minutes later. Jehmrode Kahlon put the Hurricanes back ahead on the half hour mark, before Mladen Ljumovic rounded off the scoring five minutes before half time.

All of those results leave the VMSL Premier Division standings as follows at the halfway point of the season. 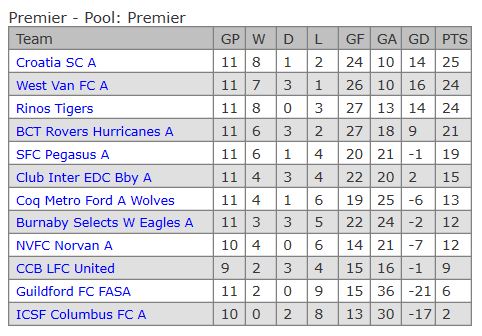 Match of the round this coming weekend is the top of the table clash between Croatia SC and Rino’s Tigers at Burnaby Lake on Friday night. Kick off is 8.10pm and it should be a cracker. Can’t guarantee more fog though!

Elsewhere in the VMSL, the promotion battle in Division 1 is beautifully poised at the midway mark. Richmond FC Hibernian, who are now under new management and are basically a UBC Thunderbirds reserve side, lead the way after an impressive unbeaten start to the campaign. That sees them sit five points clear at the top, with a logjam of four teams behind them.

Two points separate the teams from 2nd to 5th, with Westside FC and Coquitlam Metro Ford Lupi on 22 points, Burnaby Metro Athletic one behind on 21, and GN Sporting Club one point further back, making for a tasty second half of the season.

At the bottom it looks like a perm two from three situation for the drop between bottom side VAFC Santos, NVFC Norvan Storm, and Vancouver Greencaps. The three teams are separated by just two points and a run of form for any of them could save their First Division status.

Burnaby Selects White Eagles B, West Van FC B, and Bombastic FC are the teams atop the three Division 3 pools.