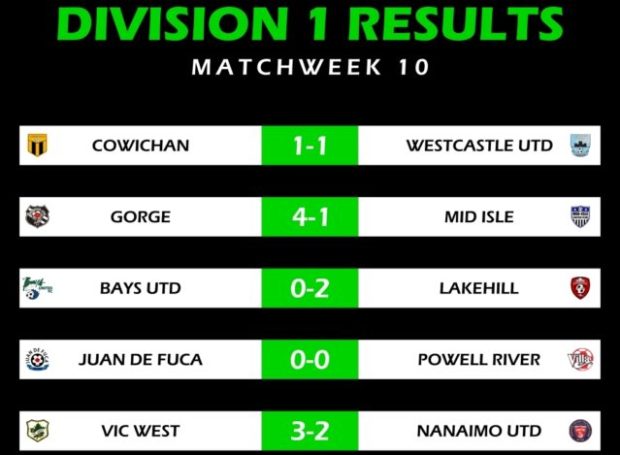 It was a wet weekend on the island, but thanks to the turf fields all the matches were played and Week 10 of this season’s Vancouver Island Soccer League (VISL)
lived up to expectations with many games having a big impact on the current Division 1 standings.

Friday night started out with a bang as defending champions Cowichan FC hosted an unbeaten Westcastle United side, in what was deemed the VISL Game of the Week. It ended in a 1-1 draw, with a couple of red cards, and the promise that a possible next game for these two teams would be very interesting.

Westcastle’s goal was scored by Sean Young, while Blaze Roberts had the Cowichan marker. Game MVP was Jordan Korven of Cowichan, noted for his excellent play on the backline, especially when the team went down to 10 men in the 47th minute.

Another pairing of two top teams battled at Oak Bay High where Lakehill got some revenge from earlier in the season, defeating Bays United 2-0 to head to the top of the VISL Division 1 standings.

Lakehill’s goals were slotted by Blair Sturrock and Nicholas Pineda-Graham, while Hardeep Gahunia earned the clean sheet for the Lakehill squad.

Friday night also saw the still undefeated Gorge FC defeat Mid Isle 4-1 to move to within one point of the top. Gorge’s goals were by Nils Webber, Arbnor Jusifi, and a pair by Zakaria Bougraine. Mid Isle’s marker was by Benjamin Robson.

Saturday saw only the second goal free game of the season in the division as Juan de Fuca All Flows (who were also involved in the first one against Bays United on October 18) and Powell River Villa battled to a 0-0 draw. JDF’s Taylor Johnson and Powell River’s Matt Liknes record the clean sheets.

The last game of the weekend saw Vic West slip past Nanaimo United 3-2 thanks to goals from Kieran Large, Salam Almardy, and Liam Wirth. Scoring for Nanaimo were Louis Harrison and Caleb Nwameme.

So after all of that, here’s how the VISL Division 1 standings look after Week10. 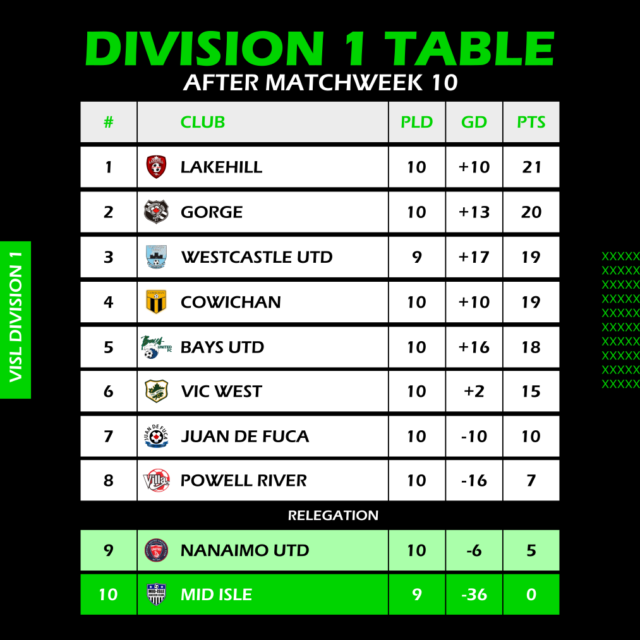 Lakehill’s win pushes them into 1st place, with the slimmest of margins over Gorge FC, third placed Westcastle United, and five time defending champs Cowichan FC, all of who are nipping at the leader’s heels.

Bays’ loss pushes the long time leaders into 5th place, three points off the pace and slightly ahead of Vic West, who picked up three valuable points.

JDF and Powell River are separated ever so slightly from both Nanaimo and Mid Isle who are resting precariously in the relegation zone.

Both Gorge and Westcastle are still undefeated and Westcastle have a game in hand against bottom side Mid Isle, a win in which would send them into first place.

Lower scores than the start of the season, but the VISL Golden Boot leaderboard has changed once again, with Blaze Roberts taking his position on top. Here is how all the rest follow. 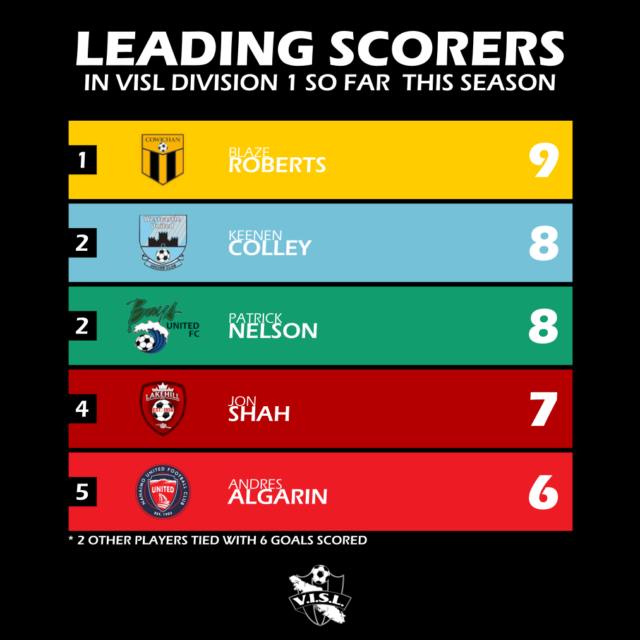 Another exciting weekend of local amateur men’s soccer at the highest level is in store on the island this weekend.

Friday gets going with a couple of top teams facing each other at Braefoot Park in Saanich as Lakehill hosts Cowichan. Cowichan will look to pay back the Reds from earlier in the season where the game in Cowichan ended up being a 3-2 win for Lakehill.

Both teams are coming off decent results from the past weekend. A result either way will pay dividends for the winning club, while a draw would make the other teams pretty happy.

Saturday is a busy day, and it starts with Powell River hosting Vic West. A Vic West win gets them back into the thick of things, and a Powell River win gets them that little bit further from the relegation zone. The road trip to Powell River is always an entertaining one that can make or break a team.

Merle Logan turf fields will host a tough match as Nanaimo will look to get out of the relegation zone, and take down the undefeated Gorge squad. These two teams typically match up well, so this will be an interesting one.

Mid Isle will host Bays United in Ladysmith on Saturday as well. The Mid Islanders will look to get a step out of the basement and try to feast on a struggling Bays United team, who are looking to stop their slide down the standings.

The final game of the weekend is considered a Westshore battle as Westcastle hosts Juan de Fuca at Westhills. The same home field for both teams, so no advantage there, but the young kids will look to get a step closer into first place with a win over a scrappy JDF team. 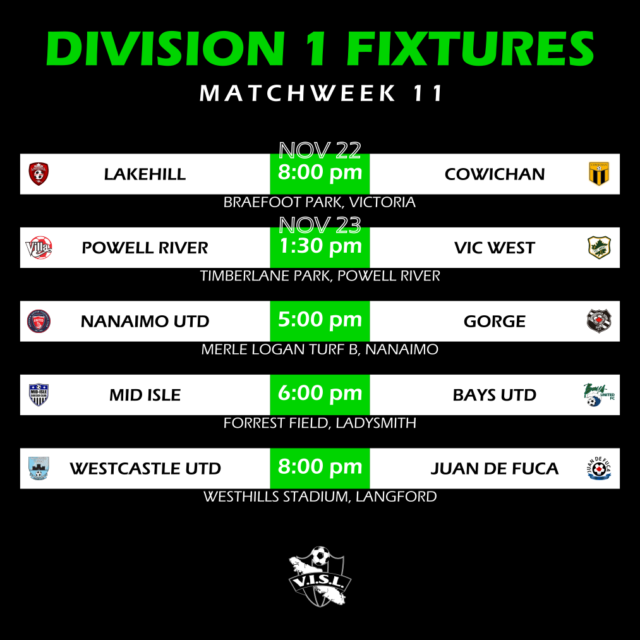 Thanks for supporting your local community members and grassroots soccer. Remember you can find all the news, results, fixtures, and standings across all of the VISL divisions at VISL.org.