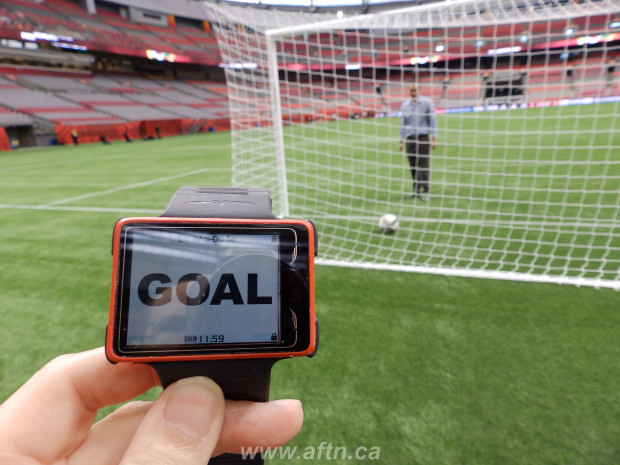 Goal-line technology in football isn’t really a new innovation any more. We’ve seen it at last year’s World Cup Finals in Brazil, it’s been used by FIFA in the Confederations Cup and Club World Cup, along with various club and international competitions across Europe.

That is still a very limited amount of games, considering how much football is played around the world each year, but the use of the technology continues to grow all the time.

And now it’s come to Canada.

The 2015 Women’s World Cup will see goal-line technology used for the first time in the pinnacle of the ladies game. For all the unwanted chatter surrounding FIFA right now, dodgy decisions around whether the ball crossed the line or not for a goal at least won’t be a part of that. Other refereeing controversies, of course, still likely will be.

The campaign to introduce goal-line technology into football was a long one that certainly split opinion.

Purists didn’t want it to change the game or slow it down with referees having to take time to review decisions. Advocates felt that with so much at stake in the modern game, and with the ever increasing and intense scrutiny on referees from television cameras, the introduction of the technology would reduce crucial, and often multi-million dollar costing, wrong decisions, easing pressure on the officials in the process.

After years of arguments, matters came to a head when Frank Lampard wrongly had a goal not awarded for England at the 2010 World Cup against Germany. Replays showed the ball very clearly crossed the goal-line but the goal wasn’t given. England went on to lose the match 4-1, but had the goal been given, it would have levelled the match up at two apiece and changed the whole dynamic of the game.

Now, as a Scot, I found that particular decision to be absolutely fantastic and hilarious! I still do! But it was to be a literal game changer in may ways.

The non goal triggered the International Football Association Board (IFAB) to review the introduction and use of goal-line technology once more in the months after the World Cup. Less than two years later, in July 2012, and after rigorous testing, the IFAB approved, in principle, the use of the technology and in December that year, the FIFA Club World Cup in Japan made history when it used it in competition for the first time.

Since then it’s been used several times by FIFA, UEFA and other governing bodies on the international stage. At club level, goal-line technology has been successfully implemented in the English Premier League for the past two seasons and the Dutch Eredivisie is another top league in Europe to use it.

From next season, you will also find the technology used in the German Bundesliga and Italian Serie A, with “a lot of interest” being shown in the technology from other leagues around the world, including Major League Soccer over here.

There are actually a couple of different providers of goal-line technology systems now, but the best known name is that of Hawk-Eye.

The Hawk-Eye name probably first came to most people’s attention with their instant replay system in tennis, and it is their technology (in association with Acorn) that will be used at this summer’s Women’s World Cup in Canada.

We’ll all remember the television graphics from Brazil showing whether the ball had crossed the line or not, even when it most obviously had! You have to show off your new toys though. But just how does the actual system work?

There are two different technologies in use – a magnetic field system and a camera based system – and it’s the latter that was used in Brazil last year and will be used in Canada this time around.

With the camera based system, there is no technology in the ball, in the goal or on the posts or crossbar. The information is all captured in 3D by 14 cameras placed around the stadium, with seven focused on each goal.

“The goal-line technology system we have is completely optical,” Laurence Upshon, Head of Football Operations at Hawk-Eye Innovations, told reporters at a demonstration at BC Place on Wednesday. “It’s a completely passive system. We use 14 high speed cameras around the field of play, seven looking at each goal, to provide all tracking and triangulation to work out exactly when the ball crosses the goal-line.”

The positions of the cameras are quite flexible. They can be mounted on catwalks, the back of stands and floodlights.

“There’s seven cameras looking at each goal, dotted around the field of play, so that in a close, goal-line scramble the ball is always found in at least two of them to triangulate up to show a goal,” Upshon continued. “We have two, which are typically located behind the goal. We have three on one side, one of them looking down the goal-line. We have two on the reverse side as well looking at each goal.”

The cameras automatically tracks the ball and automatically tells match officials, assistants as well as referees, whether the ball has crossed the line by sending an almost instantaneous decision through to a watch worn by the officiating crew. 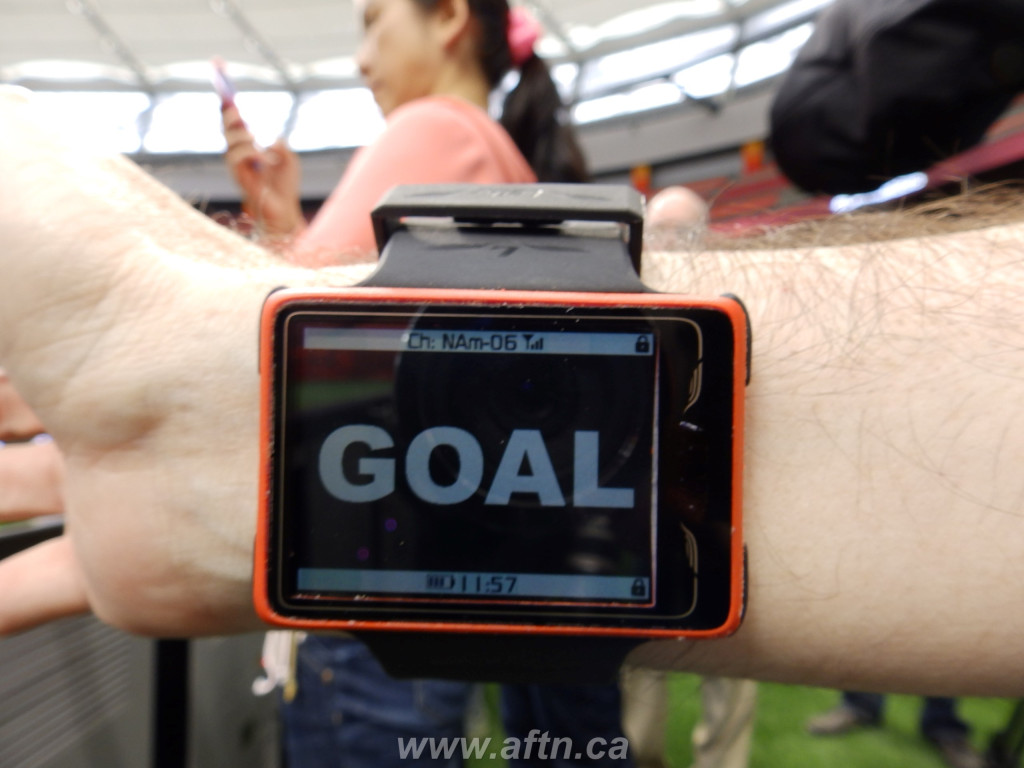 That decision comes through in less than a second via a special wristwatch worn by each official. If it’s a goal, the watch vibrates for several seconds and “GOAL” flashes up on the screen. We were given one to wear during the demonstration and it really is impressively instantaneous.

“As soon as the ball crosses the goal-line, it alerts all the match officials by using the goal-line technology watch,” Upshon added. “They’ll have a vibration and an alert [on the watch] to show that it is a goal and they can award the goal.

“The really key thing about vibrating is that the referee, and certainly the rest of the match officials, can keep their eye on the game, watching for fouls and handballs.”

But can the technology be fooled? What if it isn’t the ball that crosses the goal-line? Not an issue.

“A ball is very particular, so it looks for certain characteristics of a ball,” Upshon said. “Not only the shape but how it’s moving, the colour of it, what’s on it. So it uses all of these factors to work out what is a ball and also what is not a ball, so it’s not fooled by a keeper throwing his towel in or a water bottle or a sun cap or something like that. It looks at all these parameters.”

The other aspect in this technological age is just how secure is the entire system? Can it be hacked and could other transmissions in the stadium on gameday interfere with it working?

Again, that turns out not to be an issue.

The watches are not on a public network. Systems are encrypted and very reliable. Even in the most congested stadium with bluetooth, wifi etc all pinging around, the goal message will get through.

Seeing the whole system in action really is quite an eye-opener. Any qualms about it delaying games are far removed, but there is still one big issue we have with goal-line technology and that is the universal accessibility of it.

The beauty of football is that it is the same rules, the same game basics whether you’re playing a match at the Nou Camp in Barcelona or on some gravel pitch in the middle of nowhere. Goal-line technology is not a system that continues that.

It’s fine having it in World Cups and in the top flight leagues around the world, but it will likely be a long time before you see it in say the Scottish lower leagues, the English non-league or USL games at Thunderbird Stadium. And let’s not even look at youth soccer.

It’s a rich man’s toy. The big money leagues and governing bodies can afford it, helped by the huge television revenues that present a growing need for such technology in the first place. But the costs are prohibitive for many leagues and clubs to even contemplate installing the system.

At least for now. But like all technological advancements over the years, whether it be DVD players, mobile phones, tablets or televisions, one thing is a constant. Wait a little bit from when it first comes out and the prices come tumbling down.

“When you look at technology as a whole, systems as a whole, the price is always evolving and getting more attractive and I think it’s only a matter of time,” Upshon told us. “We’ve had a lot of interest from other leagues as well. Two years ago it was a brand new system and over time it will evolve.”