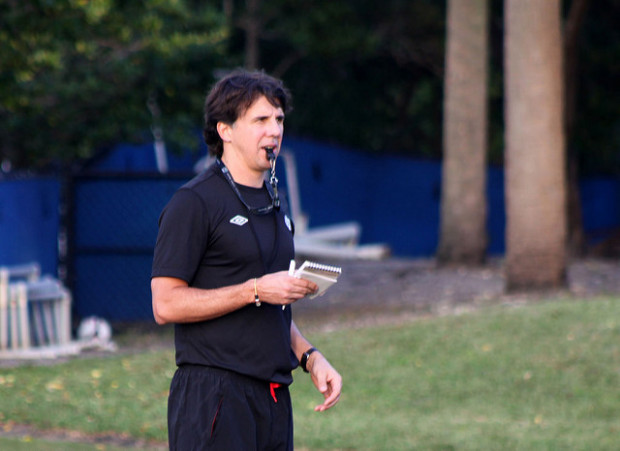 It’s a long time problem that we’ve discussed many times before on these pages, and one that we’ll no doubt continue to discuss for a while yet.

Just how do we develop our young Canadian talent if they can’t get meaningful minutes for their club sides at the top level here in Canada?

Some go on loan, some look for an actual move to an European club, some take the lower league option and some take the college route. A few also juggle a combination of these options, whereas others are reduced to merely sitting on the bench and reserve game outings.

With the U20 World Cup qualifying campaign coming up, and hopefully then a build up to the finals themselves in the summer, it’s vital for the Canadian national team that their squad members are getting the necessary development that actual competitive playing time gives them.

It’s a problem that Head Coach Nick Dasovic is fully aware of, but putting the solution into place isn’t that simple:

“I think right now, there’s players that have moved out of the Academy ranks with this group and going into the professional environment.

I’ve talked to some of the clubs on a personal level. I think that everybody wants to find a solution to the problem of getting minutes for our players.

We have to understand that every Head Coach, whether it be Martin Rennie, Paul Mariner or whoever is going to be there in Montreal, they have an obligation to their team.

Can they give them minutes?

If you actually look at the facts, they want to try and maybe get them loaned out to different clubs, whether that be in the NASL, the USL, in Europe. I don’t know what the situation is, but our kids need to be playing to continue their development.

With the growth of the MLS and NASL academies, this is likely to be the greatest source of players for the Canadian U20 and U23 teams for many years to come, but the full impact is not likely to be felt for a while yet.

Only ten of Dasovic’s current 21 man training camp squad are coming from Canada’s top four professional sides (eleven if you count Montreal’s Ismail Benomar who is currently over in Germany). Only the Caps’ Bryce Alderson and Caleb Clarke, and TFC’s Doneil Henry, are on their team’s MLS squads.

But the minutes are hard to come by, especially here on the west coast. We may develop some great young talent here in Vancouver, but it’s what we then do with them once they graduate the Academy that is the whole key to the future at both club and country level.

Doneil Henry played in 18 of Toronto’s MLS games this season, starting 11 of them and scoring one goal in 1139 minutes played. He also saw 84 minutes over two Champions League games. That’s not bad development opportunities for a 19 year old and sets a standard to aim for at least.

Caleb Clarke on the other hand saw just 15 minutes of action in two games for the Whitecaps, whilst Bryce Alderson saw none whatsoever.

Other players are at least getting some regular playing time with the Academies here, with Montreal’s U21 having been playing in the CSL.

But then you have players like Ben Fisk who has been somewhat in limbo and only training with the Caps since returning from a short trip to Germany at the end of the USSDA season.

Too old for the U18s and nowhere to play for the Whitecaps unless he is signed to a MLS contract or until the PDL season starts in May.

How can that possibly be good for any young player? Or Canada? Training can only develop you so much.

As slated as it is by many here, a number of players still look to go down the college route.

They get some regular games and at least they also get an education behind them for the future.

With players like Daniel Stanese, Callum Irving and Jordan Murrell playing in NCAA and also making the U20 squads, it’s another option for young Canadian talent and they at least know they’re not going to get forgotten about on the national stage by taking that step:

“The NCAA has been a big part of our program going back the years. When I was coaching with Dale, with the 20’s, we had a lot of kids involved with the NCAA.

Now, as the movement’s going, there’s more of the kids with the academies, bypassing the school system, or going to Europe.

We’ve got Daniel in camp because of the fact that they got knocked out. Ben McKendry, we’ve talked to him. Obviously New Mexico’s still in the tournament.

We’ve got another player, Jordan Murrell who’s at Syracuse, so we’ve got a few other boys that are involved. We’ve got Nathan Ingham here (another Florida Gulf Coast University player), also Callum Irving, so we’ve got a number of NCAA.

I think as we go forward, and as the professional clubs grow, there might be less and less, but right now the NCAA still plays an integral part. And not just the NCAA. We’ve obviously looked at some of the kids playing in CIS as well. We’ve got one kid from Edmonton, Allan Zebie, play with NAIT (CCAA).

The school system is represented well. We don’t bypass it and we definitely look at it and keep tabs on the players.

One thing you have to remember, Ben McKendry is playing in the round of 16, as is Justin Murrell, so they’re playing at a high level right now, so that definitely counts for something.”

We also know that there’s been a few of the SFU guys that have been watched with regards to making the step up to the national team.

Dasovic is keen to keep all his options open and scour the globe for Canadian talent, as demonstrated by the inclusion of the three Polish based players in his latest squad.

But what is the solution going forward?

More players can go and seek their playing time in Europe, but it doesn’t mean that they’re going to get it at first team level, but there are the various U23 and Reserve leagues.

It’s better than being stuck with a Canadian MLS team and just sitting on the bench or playing a handful of reserve games. Maybe only just though and then there’s the hassle of getting released by their clubs to travel across the Atlantic for camps and games.

You don’t want to lose Canadian talent to the domestic game, but better that than losing them to the game altogether.

MLS are expanding the Reserve League next season, but it’s not enough.

You can look at more D2 and D3 sides, a national U23 League, lots of options, but they all take time, they all take money and they all take a willingness by all parties for them to succeed.

Is there really no quick solutions? Whilst everyone struggles to find one, it’s our young players and the program that suffers.

The current Canadian U20 crop, and 18-23 age group, will play a huge part in the future of the senior national team for a fair few campaigns down the road.

If Canada really wants to avoid future 8-1 drubbings by the likes of Honduras, then finding a way for these guys to get regular playing time in some of their key developmental years is surely one of the places to start.

So who will be brave enough or forward thinking enough to take that first step for the future of the Canadian game?