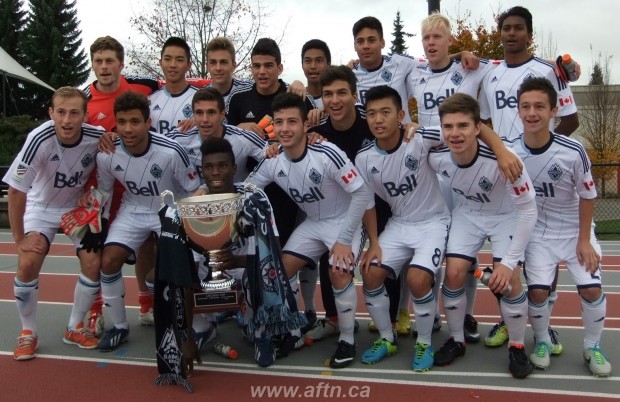 It’s one of our favourite times of year here at AFTN. The start of the 2014 United States Soccer Development Academy (USSDA) playoffs got underway today and that means it’s time for our third annual Residency Week.

Both Vancouver Whitecaps’ U18s and U16s have headed down to Westfield, Indiana for what looks like being one of their hardest playoff weeks yet, as U16 head coach Rich Fagan is under no illusions about.

“The playoff draw is exciting. Every game will be challenging,” Fagan told AFTN. “It’s another great learning opportunity for the players. Everyone at the club is pleased for the players, as we had a strong season with many consistent performances.”

The U16s start their campaign on Tuesday but the U18s got underway this morning with a 2-2 draw against Solar Chelsea in their opening match in Group F.

The draw is not too bad a result for the Whitecaps, against a team who finished third in a strong Frontier Division of the Western Conference and are seeded 17th overall, just two behind the Caps.

In typical USSDA fashion, the Caps were originally drawn to play wildcard side Oakwood SC before a late switch was made with the stronger Solar Chelsea team.

Despite the strong opponents, the U18s will be disappointed to let a 2-0 lead slip away in the closing minutes.

Terran Campbell had opened the scoring for the Caps and Ali Musse made it 2-0 before Solar Chelsea fought back to take away a share of the spoils.

The U18s are back in action on Tuesday when they take on Georgia United at 7am PT, before facing the number one seeded Bethesda-Olney on Thursday morning in what could be the big group decider.

If the Caps’ needed any confirmation as to the danger the top seeded Rockville, Maryland side pose, they thrashed Georgia United 6-0 in their opener today.

Although a win in the first group game is always what you prefer, the Caps U18s are likely to still advance if they can win their final two matches.

If they need any inspiration, then they only have to look at the Caps U18s side from two years ago who actually lost their opening group game in the playoffs but fought back strongly and eventually made it to the Championship game.

One man that was pivotal to that fighting comeback was goalkeeper Callum Irving and the young stopper, who was named ‘man of the match’ in the Championship game loss to Dallas, has some advice for the Caps Class of 2014.

“Just worry about yourself, because we lost our first game in the Academy Playoffs but we controlled the next two games, won them and let the rest play out,” Irving told us.

“You can’t really worry too much about what’s going on around. You just got to stay focussed on how you play, getting the results you need and then whatever falls into place, falls into place.”

The Caps U16s are back in the playoffs for the first time since 2012 after missing out in a rebuilding year last season.

“The players endured a tough season last year in terms of results, but what they gained having gone through that is invaluable” U16 head coach Fagan told us, but they face a tough battle if they are to get to Finals Week in July.

The Caps are seeded 13th at the U16 level and their Group C is the only one to feature two sides that won their divisions. The big showdown potentially comes in Friday’s game against Weston, who won the Southeast Division of the East Conference and are seeded 7th overall.

New Jersey side Match Fit Academy are first up on Tuesday in a game that kicks off at 11.30am PT, with Houston Dynamo U16s next up at 11am on Wednesday morning.

So a hard week is in store for both teams if they want to head to Final Week in July.

AFTN will bring you full coverage of the playoffs over the course of Residency Week, along with interviews with current and alumni Residency players and our annual “Ones To Watch” countdown.

You can get our full preview of the U18s and U16s’ groups and their opponents HERE.

Good luck to all of the guys. We’ll be cheering you on from afar.