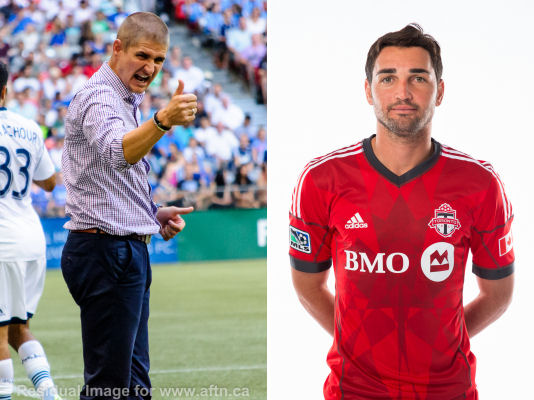 MLS Designated Players have been very much in the news this month. A lot of comings, some goings and a few what happenings have been the talk of the towns.

As things currently stand, Vancouver Whitecaps Designated Players slots are currently full. But never say never. This is MLS after all.

Whitecaps captain Pedro Morales, the recently re-signed Matias Laba and newly acquired striker Octavio Rivero are Vancouver’s three DPs right now, and they’ve managed to retain the former Chivas (and League) Designated Player Mauro Rosales on a non-DP contract. It’s already like having four, but coach Carl Robinson isn’t ruling out the possibility of being able to add another to the mix or another preseason raid on TFC.

LA have splashed out on Steven Gerrard, New York City on Frank Lampard (they think), Orlando on Kaka and Toronto like to be linked to every player under the sun as the perennial losers try and find someone that can lift them out of their eight year slump. All big names, all coming to MLS on big money. They’re probably not big risks in bringing success, but you never know and as Robinson addressed last week.

“Money doesn’t guarantee you success, as you’ve seen with a number of clubs,” Robinson told reporters, whose minds obviously started to think of TFC. It’s a Pavlov’s dog scenario I think. “I want to try and guarantee success but in the right way and I feel the right way is developing our own Canadian players through our Residency program.”

Robinson has said that he still expects to add three or four players to the Whitecaps for the season to come, just don’t expect them to be of the big flashy kind that others are courting. Banks will not be broken in Whitecapsland, but instead, the club will continue to look at picking up quality talent, at more affordable values, that can still get the job done, and as such, Robinson puts more faith in his scouting network than playing fantasy football to build his squad.

“If you don’t get the recruitment right, it doesn’t matter how good a manager you are, the guy with the best players will always win,” Robinson said on a conference call on Sunday afternoon, following the announcement of his new multi-year contract extension. “We’re recruiting from a certain pool of players. We’ve made our model as a club. We’ve decided what way we want to go.

“It’s safe to say we’re not going to be spending six, seven million dollars on a player. That’s what I don’t want and that’s what other clubs are doing. It’s important we get it right. That’s what we did last year and it’s important that we continue to build that recruitment this year and in years to come to make us successful.”

The additions of Jozy Altidore and Sebastian Giovinco have provided a familiar scenario in Toronto. They now have four DPs and three slots. Last year it was Matias Laba who was deemed surplus to requirements, this year another South American looks to be that guy. And you know who loves South Americans!

“Each club has their ideas and philosophies about the way that they want to try and be successful and Toronto has their model in place of bringing in big name players on high numbers,” Robinson told us. “Whether that’s works or not will remain to be seen, but I’ll be very surprised if Gilberto does not move.”

The Brazilian had a slow start in MLS and seemed to struggled to find his feet as he adjusted to his new surroundings. Not ideal for a player commanding a DP slot and a $1.2 million salary.

He showed enough flashes to show that he has talent and what it takes to be a good striker in the league. It was fun joking about his missed opportunities in front of goal, but you always got the feeling that when that duck was broken the goals would come. And they did.

It took Gilberto ten games to grab his first MLS goal. He finished the season with seven goals and five assists. To put that into some context, those numbers would have seen him placed second in both categories on the Whitecaps.

Bearing those numbers in mind, the plethora of South American talent already in Vancouver and the Laba deal from last year, does a player like Gilberto interest Robinson and would there be scope to get a deal done even if he did?

“He’s certainly an interesting player and one we’ve talked about as a staff,” Robinson admitted. “He’s got fantastic ability. I don’t think he’s settled as much as he probably should have. We’ve got three Designated Players just now, so depending on whether that changes or not, we might not be able to do anything there. I’ve managed to bring in Octavio, which is a great bit of business from us.

“There’ll be some that will take advantage of that situation if things don’t change, because there will be teams looking at it that they could be the ones that changes Gilberto’s goal spree from okay last year to hopefully good this year for someone. Again, it might be a scenario like Matias Laba, which we were able to take advantage of last year.”

Laba’s contract is the one that stands out. He is still going to be classed as a young DP, but there is scope for the Whitecaps to use allocation money to buy the Argentine’s contract down and allow them to have the talented defensive midfielder on a high, no Designated Player contract, ala Nigel Reo-Coker last year.

There are also the terms of the new Collective Bargaining Agreement to be thrashed out, with many rumours suggesting an additional DP slot of some kind will be added. That could of course allow TFC to keep a player like Gilberto if they chose to do so, but it would also allow Robinson to bring in another DP himself, whether that be the Brazilian striker or someone else, and it’s certainly an option that is in his plans, whether through the new CBA or jiggling around current contracts.

“Yeah, there are options,” he admitted. “We talk about that all the time. Learning the way the system works is very important. Because of the CBA coming up now, I think there will be changes within the CBA which might affect that or probably will affect that, so there are options to do that and something that we maybe will look in to.

“You look around the league at the moment and at Orlando, players like Brek Shea have been added as non Designated Players but their salaries are higher than probably the DP slots allow. So it is an option we’ll look into, depending on if we have enough money to do that within the cap constraints. It does give us a little bit of flexibility if we have enough money. If we do, then it’s certainly something that we might well explore.”