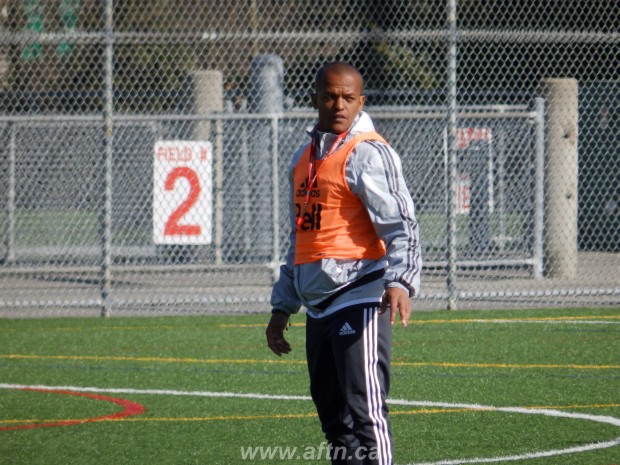 I’m not sure at what stage football became such a stats heavy numbers game. I’m like most of you though, I lap up all the info Opta and their ilk can throw out at me.

But as we all know, stats don’t tell the whole story and you have to look away from the numbers.

If you look at Robert Earnshaw’s preseason stats, they show a trialist striker who played 171 minutes over six games, not registering a goal or an assist. What they don’t show you is that the player played more of a deeper role, had a high work rate, comes with bags of experience and had two spectacular bicycle kicks!

They also don’t tell you about him staying out on the pitch for a good 15 to 20 minutes after training down in Portland working on his finishing. You don’t see too many younger players doing that, never mind a veteran. 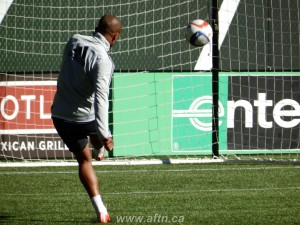 With the new season now just two days away, it’s the Welshman’s experience that is attractive to Carl Robinson and his young Whitecaps side. As of right now, Earnshaw is officially still on trial with the ‘Caps but the signs are that status is set to change imminently.

“We’re talking,” was all Robinson would say to reporters. “I’ve spoken to Earnie numerous times about it. [A decision] doesn’t need to be by the weekend but to be fair to him I will make it sooner rather than later with him.

“We’ve had a good look at him now. He knows me inside out and he knows us inside out. We’re just taking it day by day now.”

It was clear from early on that Robinson would love to have Earnshaw in Vancouver and the striker would love to ply his trade here. In the way were the CBA negotiations and what any new deal would mean to the salary cap and what Robinson had available to spend on any further new additions.

That deal is done now and the Whitecaps know exactly where they stand and what cap room they have to manoeuvre with.

“I think it will give us a little bit more flexibility in the cap, but we were in a very good cap position anyway,” Robinson said. “I’d planned to have a certain rise anyway. What I don’t do, is I don’t make rash signings and I don’t make short term signings for the club. All signings I make here will be for the long term benefit of the organisation, whether I’m here or not.

“We’re in a decent position. If the cap goes up, which it is, we’ll be in a very comfortable position, which we are.”

That should mean a deal with Earnshaw can be agreed any day now.

Robinson has previously spoken about his desire to add an experienced, veteran striker to his young group. A proven goalscorer and ideally one with previous MLS experience. Earnshaw ticks every box.

With 17 years of experience in the pro ranks at both club and international level, and a history of scoring regularly with every club during his career to date, Robinson knows what having a player of Earnshaw’s qualities can mean to the Whitecaps this season.

“It’s a very interesting option for us,” Robinson told AFTN last week in Portland. “He brings a lot to the table in regards to his experience. Someone who’s scored 250 goals in his career is maybe not a bad option to have coming off the bench now and again.

“He’s also a great guy. You see him talking to the younger lads here and the guys have already taken to him as well.”

And it’s that desire to impart knowledge to the younger guys in the group that is also very appealing to the Whitecaps.

When we spoke with Earnshaw a couple of weeks ago, he spoke of his eagerness to share what he’s picked up in the game over the years, telling us “I find myself giving what I’ve learnt and what I think with more inexperienced players”. 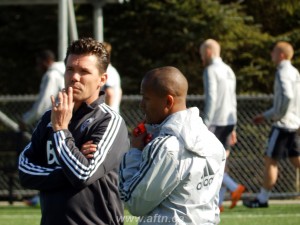 It’s not just talking the talk to earn a contract, Earnshaw has been showing it in abundance in his short time at the club. On Wednesday he was a very active part of the coaching team at WFC2 training, assisting Alan Koch. It was clear the players were keenly listening to his advice and for me was just another sign of what Earnshaw will offer the Whitecaps this season.

“He asked me if he could do it and because of my background and the opportunities I was given at New York under Hans Backe, I want to give something back to players as well,” Robinson told us. “I did it with Kenny when he was here for a short time and I’ll do it with Robert.

“He’s going through his coaching qualifications. He’s getting a certain number of hours in that he needs. It’s something that he wants to do and I’ll help him with that, whether he’s here or whether he’s not here.

“But a lad who’s scored 250 goals in his career has certainly got some experience that he can pass on to a team that apparently doesn’t score enough goals.”

If Earnshaw and the Caps can get a deal done within the next 24 hours it will mean that we could see the Welshman take the pitch against his former team Toronto on Saturday. It’s another interesting storyline to add to the First Kick clash.

And one thing I think we’ve all seen over the years is former players coming back to haunt their old clubs. Let’s hope that continues at BC Place at the weekend.