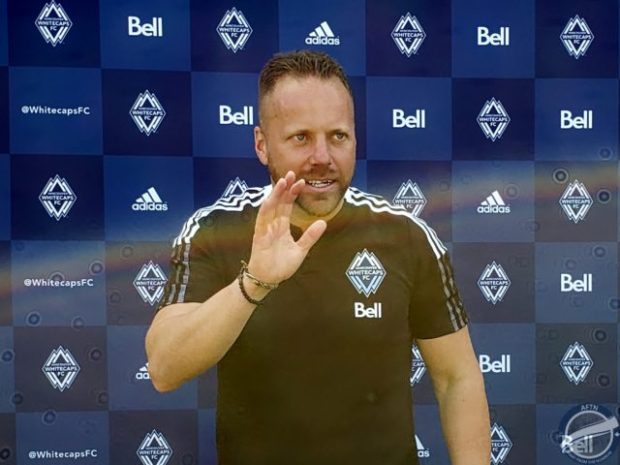 After the past 18 months, nothing should seem strange in football any more, but even with that said, Vancouver Whitecaps returning to Canada to be able to train, yet still having to fly into Salt Lake City to play one last ‘home’ match on American soil because of a Wings and Wizards event at BC Place, still comes across as odd.

But here we are. Vancouver trained up at UBC from Tuesday to Friday before boarding a charter flight to head back to their home away from home in Sandy, Utah for one final time to take on Minnesota United on Saturday before embarking on a tough three game road spell to kick off August in California and Texas.

“There’s a lot of excitement about being back here, but there’s a reality also that we feel that it’s not totally finished yet,” coach Marc Dos Santos told reporters at the Whitecaps training facility this week. “We still have a piece of our lives in Salt Lake in the sense that we’re preparing a game here to go play at home on Saturday. So that’s the last piece missing I think before really closing the chapter of being home in Salt Lake.”

Dos Santos views every match played this season as an away game. When they take to the BC Place pitch next month, that number will have risen to 19 matches, more than half a season. That will sit at 25 come season end, meaning they really need to make home advantage pay in the nine games they will get to play in Vancouver.

The Whitecaps have a 3-3-1 record in their home games played in Utah. That’s 10 points taken from a possible 21 available, with just four more taken on the road, leaving them 12th in the standings, six points below the playoff line. It’s hard to put a quantifiable figure on just what this Canadian exile has cost the ‘Caps pointswise but Dos Santos feels it’s certainly enough to go from being in the playoff places and not.

“I think we would have had, at minimum, 20 points instead of 14 if the schedule was normal and we’d been at home,” Dos Santos mused. “We feel it when we play against other teams. We have a lot of experience of playing on the road. I know that when you look at the MLS app it says Vancouver plays at home to Salt Lake, but that’s a lie.

“The reality is that we’ve played 15 games on the road and we felt it how fans were pushing their teams. We felt it in Seattle, we felt it in Kansas City, we felt it in Dallas. We felt it with LAFC. It’s environments that when all the colours are for the opponent and every time it’s a corner kick or a free kick it gets louder. We don’t get any of that.

“It’s an important feeling to be back, and okay, we won’t play a lot of games at BC Place, or the amount that we wanted in the beginning, but we’re going to play games at BC Place and we’re excited about it. We knew it was a tough week before coming here, playing against Galaxy, Houston, and LAFC, but we said there’s no way that we’re going to go back home without a good, positive run, so we were able to build that and now we’re in a position to prepare well the next game.” 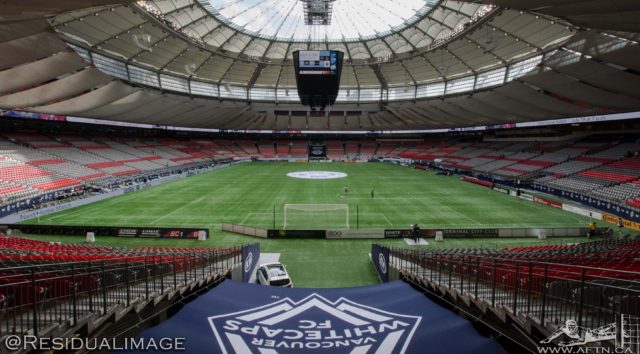 This upcoming four game spell could be the making or breaking of the Whitecaps’ season by the time they do actually get to play a real home game against LAFC on August 21st.

Minnesota in Utah this weekend is followed by trips to the LA Galaxy, San Jose Earthquakes, and Austin FC. All four are games that the Whitecaps can certainly take points from, and you feel they pretty much have to stay in the postseason mix.

That starts against the Loons on Saturday, who come into the match unbeaten in three after two good wins over Seattle and Portland and a midweek come from behind draw at LAFC. It’s going to be tough for Vancouver, but it’s more of a level playing field than it could have been, with this now an away game for both teams.

“They played in LA on Wednesday, so first we’re going to evaluate that very well,” Dos Santos said. “I don’t know what Adrian [Heath] is going to do with the line-up, but I know what we want to do and we’ve built in the last few games and want to keep growing it.

“There’s no excuses about flights, because both teams are doing it. There’s no excuses about stadium or fans, as it’s going to be the same for both teams. When I look at the standings and what three points could mean, things in MLS change extremely fast. You go from a tough run and after with four games with boom, you’re three points behind the line, so we’re really taking it a game at a time.”

Minnesota know that only too well. They started the season in the worst possible way, stopping a run of four straight defeats with a narrow 1-0 win at home to Vancouver on May 12th. The Whitecaps played one of their best games this year in that match, little consolation in the loss, but it was a victory that kickstarted the Loons season and they’ve only lost one of their ten games since, winning half of them and they currently occupy the 7th and final playoff place in the Western Conference.

Roared on by their ‘Wonderwall’ of fans at home, Minnesota are a far different animal on the road, with just one win and three draws from their seven away games so far this season, something to give Vancouver some hope heading into this one.

“We go again now. We’ve got to dust ourselves down, see how everybody is. Vancouver have had a nice little run of late. They look as though they’ve turned the corner themselves. We know it’s not going to be easy, it never is at Salt Lake with the altitude and a team that’s coming off the back of a draw here and a win a few weeks back. They’ll be very confident as well.”

“We’re very focused,” Dos Santos said of the match with Minnesota. “Of course the team is in a certain level of confidence that is positive right now, but we have to keep confirming things. We played a very good game when we watched it again in LA and we hope that we can continue building on it going to Salt Lake to play Minnesota.”