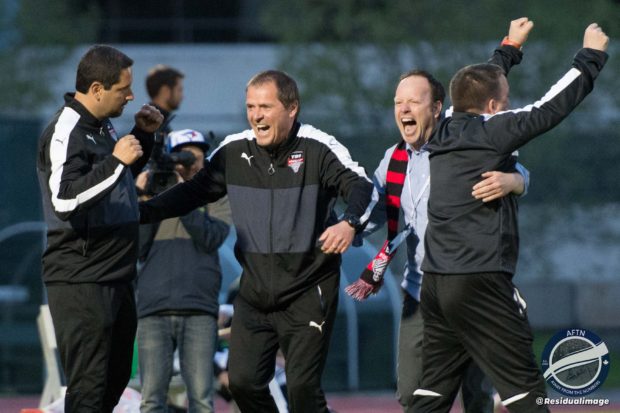 It was always going to be a season of firsts for TSS Rovers in their inaugural year in the PDL, but Friday night’s 2-1 win over Calgary Foothills was a special one.

Zach Verhoven’s 77th minute strike proved decisive, and although there were a few nervy moments on the touchline for TSS head coach Colin Elmes in the closing minutes, the Rovers saw the match out fairly untroubled.

“I think the clock was actually going backwards there when it went 2-1,” Elmes joked after the match. “I looked at it and I was like ‘oh god, there’s ten minutes left, this is going to be like a lifetime’.”

It was a victory that took TSS into a positive points total for the first time, after their three point deduction at the start of the season for fielding an ineligible player, giving them a record of one win, one draw and three defeats from their first five matches.

Not a bad start for a new team, and as delighted head coach Colin Elmes was with his side’s first ever win, he doesn’t feel their record is a fair reflection of how the team has been playing.

“We honestly believe that this team, if we’d managed the games the way we’re capable of, we should have been two and two right now coming in to this,” Elmes told AFTN. “Then this would have been a great victory, but it wouldn’t have been our first.” 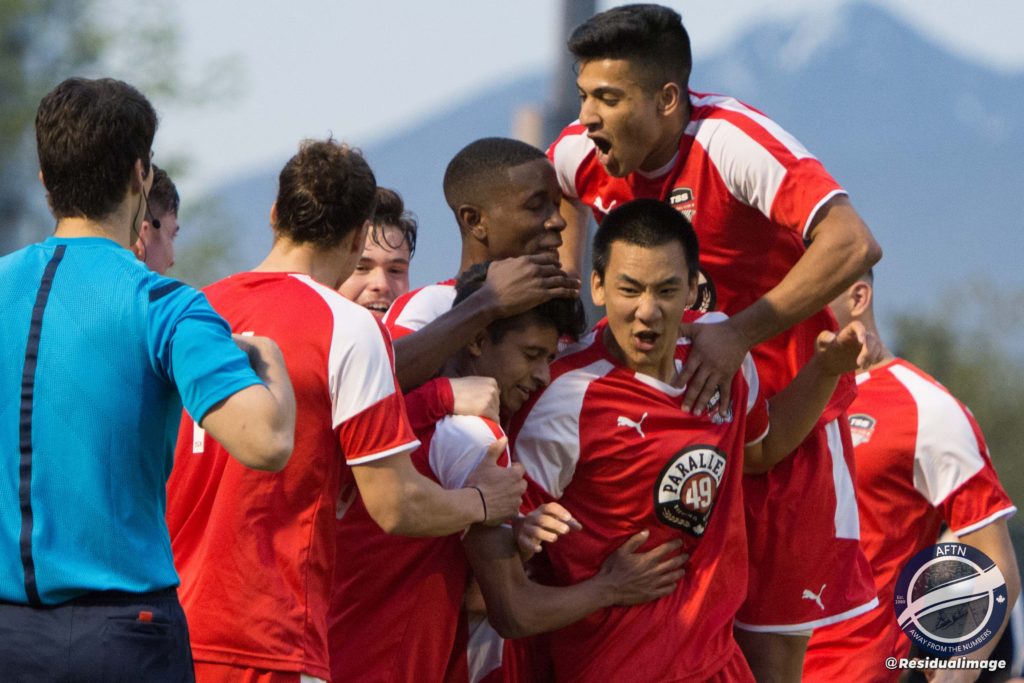 There were a number of pleasing aspect from the win apart from the victory itself. Seeing out the match, successful game management, and better defensive tracking from the midfielders all contributed to the three points. And the battling quality shown by the Rovers particularly pleased Elmes.

“I’m pretty happy with the resilience level of the boys tonight,” Elmes told us. “You think about what’s gone on over the first few games and these drastic moments when 10, 15, 20 minute periods where we just kind of seem to throw it away. And the level of intensity, and the level of concentration and discipline goes out the window.

Mentally, it was important that TSS saw this match out after giving up leads against Calgary and Lane United in two of their first four games. Letting another three points slip away could have proved a crucial blow for this young Rovers side self belief.

Instead it’s revitalised this team, laying some nice foundations for their remaining nine matches, especially in the knowledge that they got the win with an injury-ravaged threadbare squad.

“We have 24 players signed for this group and we had 15 healthy and ready bodies tonight, and one of them was our back up goalkeeper,” Elmes said. “The guys that we had on the bench, two of them have just turned 18.

“So yeah, you think we’re going into this thing tonight against a top team in the PDL and there’s something real bad here could happen. The amazing part is we had to make that early substitution, but I think the guys, for the first time, got angry.” 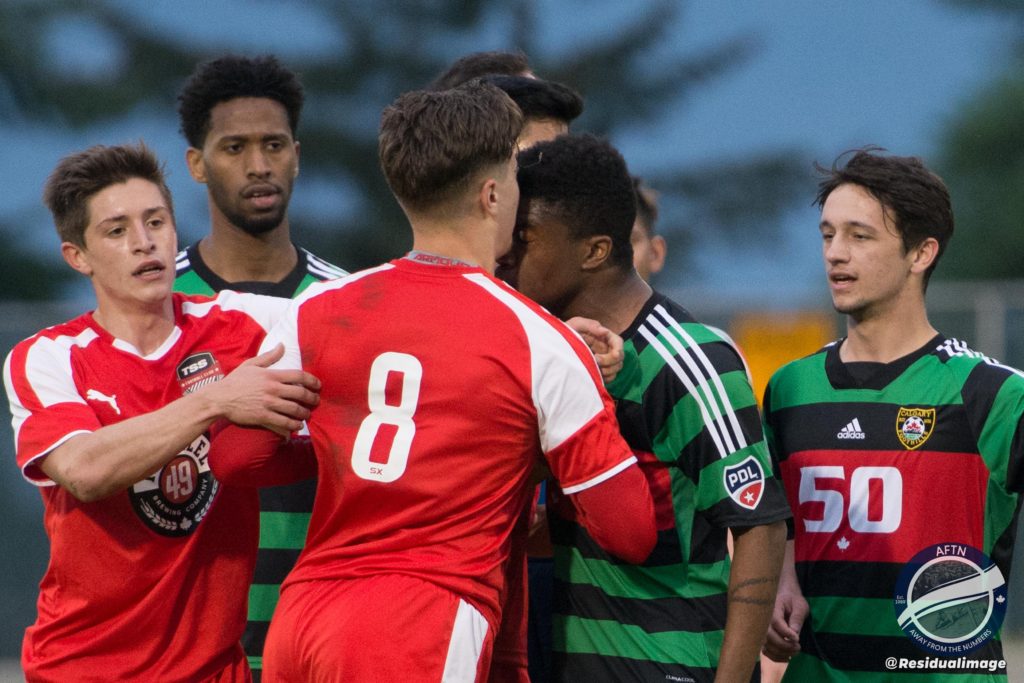 The penalty call that Calgary got in the 42nd minute was perhaps the start of the home side’s anger and frustrations. It felt soft. Maybe it was, maybe it wasn’t, but ultimately you can’t make a tackle like that in the box. Whitecaps Residency alumni Kyle Jones stepped up to tuck away the spot kick, his fourth penalty in three matches against TSS this season. Incredible stuff.

That goal negated Daniel Davidson’s 13th minute opener, when he bundled the ball over the line after some great work and a goalbound effort from Kristian Yli-Hietanen was cleared off the goalline, off Davidson, off the bar, and in.

The game got chippy towards the end of the first half and for all of the second. It became very stop/start as the tackles flew and the cards started coming out. There were 39 fouls committed during the match, 24 of them by the visitors. But it just made TSS all the more determined to get back in front and see out the match, as they channelled their anger to good effect.

“There was some stuff there,” Elmes said of the mood of the game. “Momentum and the dynamic of the game is always an interesting thing to kind of think about as the game unfolds. About the 55, 60 minute mark there were some things that went on on the field, some referee calls that went in weird directions, and our guys got pissed off.

“And when you get pissed off you find energy. Willie [Cromack] and I kept checking every couple of minutes – anybody getting tired here? No. Leave them. They were running on adrenalin.”

It was an excellent and very hard fought team performance. Every player put in a shift, and they had to. The standout player, and out Man of the Match, however, was TSS goalkeeper Andrew Hicks.

The Trinity Western keeper was in fine form from kick off, denying Calgary on every occasion, excluding the penalty, and producing a sting of top class saves that kept TSS in the match. He finished the game with nine saves and rightly earned the plaudits from his coach.

“Our goalkeeper Andrew Hicks was fantastic tonight,” Elmes added. “He made some very, very timely saves. We missed a couple ourselves early on that probably should have gone in, but you just have to scratch and claw, and grind, and find ways to solve the problem.

“Today, the guys came together. That sort of stuff bonds groups and I think the bond just got stronger in our squad.” 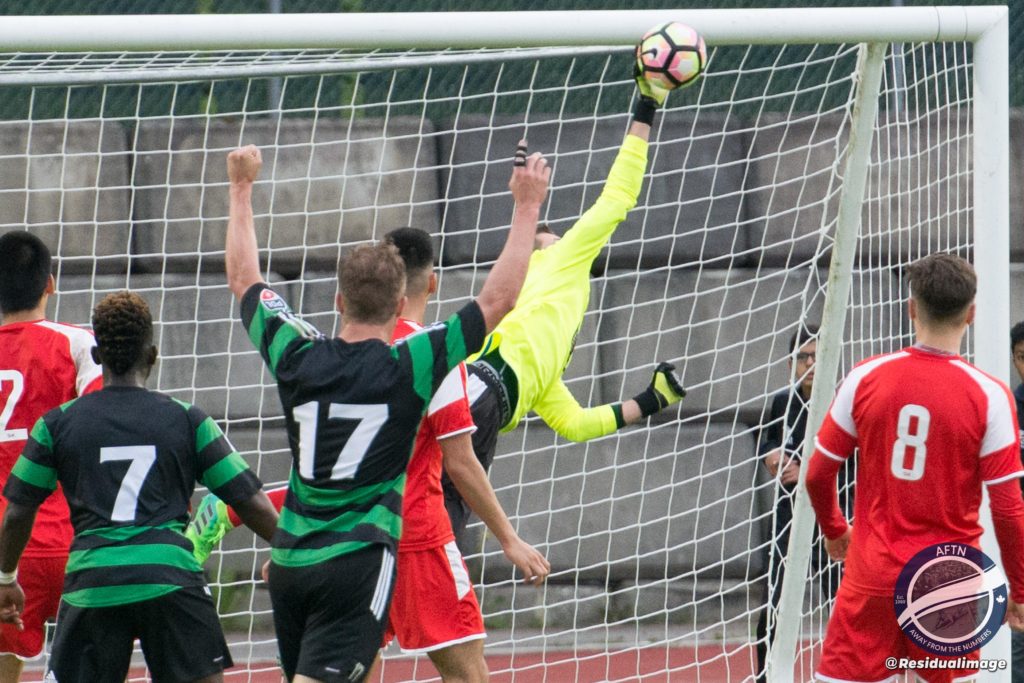 Another standout player for Rovers was Zach Verhoven. For the second straight week, the UBC Thunderbird put in an electric performance at times, after coming on as a first half substitute. He got his reward this week with the winning goal.

Verhoven lit it up against Lane last week, but a poor midweek showing in Portland, which saw him outmuscled at times, left the TSS management wanting to send a message. It worked and they got the response they were hoping for, after he came on a first half sub for injured goalscorer Davidson.

“When we told him tonight, he wasn’t very happy,” Elmes admitted. “And we were happy that he wasn’t happy. It’s touch. Zach is a very, very good player who is still trying to find his feet in this league. This league is very physical and there’s a lot of stuff he needs to get better at away from the ball.

“So a little bit of a message to him tonight. You get these critical moments in your soccer life when you’ve got to go on and do the business. I’ll take having sand kicked in my face for making the wrong decision any day when a player reacts like that.”

TSS now get a week to get their squad fit, and possibly add one or two fresh faces, before they travel south for two road games in the space of three days, playing at Lane United on Friday and then Seattle Sounders U23 on Sunday and looking to build on what they did against Calgary.