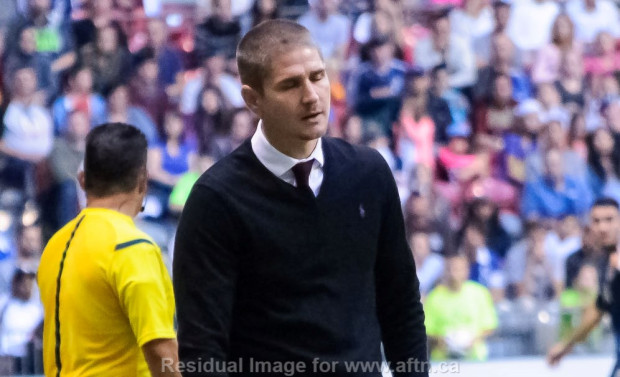 Pedro Morales provided the game changing moment the game was calling out for, as he struck a glorious free kick up and around the wall in the 82nd minute, and the road warrior Whitecaps were able to see out another 1-0 away win this season, this time in Colorado…

… is what the post-game reports should read in a world where there is average or better officiating.

Instead, a non-call on Gershon Koffie leading to the Rapids opening tally, and an absolutely horrific invisible foul on Pa Modou Kah which negated Pedro Morales’ first good free kick on goal as a Whitecap and referee Jose Carlos Rivero is the story yet again.

Being the main story is hardly a new feeling for the official, as he was indefinitely suspended in the 2014 season after being charged with two counts of felony fraud for collecting over $14,000 in insurance payout while working.

In Colorado, Jose Carlos Rivero only added to questions about his judgement as he appeared to be guessing when interpreting the laws of the game throughout the 90 minutes.

Officiating is a tough task, and there is not a league in the world where fans would be unanimous in singing the praises of their referees, but all you can ask is for the official to be consistent and not affect the outcome of a game. Neither was completed on Saturday in Commerce City.

The Professional Referee Organization was created in 2012 to address concerns over a lack of consistency in the application of the laws of the game, and while they’ve continued to push education and stability among the wardens of game, there continues to be a serious lack of dependability week in and week out.

Integrity is likely not the problem, as it’d be giving too much credit to the officials. Instead, ineptitude is the most likely answer in yet another week in which officiating decisions change the outlook on the standings.

This time, it is the Whitecaps on the wrong end of an official causing a critical three point swing, meaning the Whitecaps now only have one more match at home to try and build a buffer before setting out on a difficult five games on the road which could prove to have a massive impact on the Whitecaps positioning by the end of the season.

And while the Whitecaps should feel that they are owed three points by the officials, the reality is they, too, have to be better to prove themselves to be a table topper.

Going into half time, it appeared as though the Whitecaps would be the most likely to walk away from Commerce City with any points, but after an excellently taken goal by Lucas Pittinari, Vancouver again appeared clueless in how to break down a team who seemed happy to sit on a one goal advantage.

Despite having little competition in the matter, Carl Robinson has shown he’s been the best manager in the Whitecaps short MLS history, but he again showed a reluctance to change the approach of a team who is struggling to break down defences.

Like for like substitutions of Cristian Techera for Kianz Froese and Darren Mattocks for Kekuta Manneh were more hopeful than they were inspiring, and it took until the 77th minute before a defensive midfielder was taken out to try and change the dynamic of the game by adding another creative influence to try and expose the Rapids’ defence.

There were some bright spots. Mauro Rosales had a promising re-entry to the side, showing an ability to shrug off players and push the play forward that the Whitecaps have lacked of late. And Techera again looked lively when he came on and has likely earned himself another start as a wide attacker. The defensive spine of the team again shone, as Kendall Waston and Pa Modou Kah had good outings and David Ousted returned to his usual stellar form, despite conceding on what was an excellently taken goal.

There is, unfortunately, no column in the standings for good efforts or moral victories, and while their performance wasn’t as poor as the officials in Colorado, they both have something in common; they need to be better.