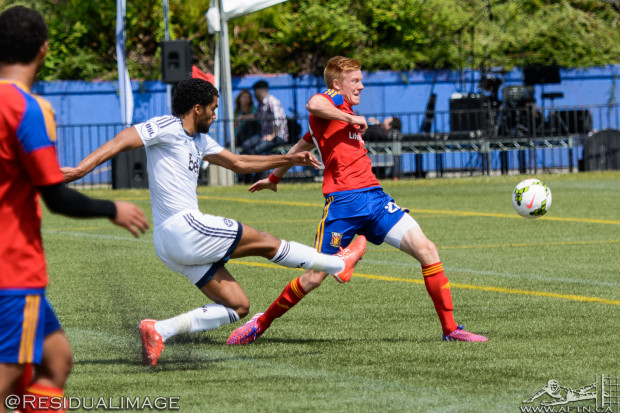 WFC2 grabbed their first ever USL home win on Sunday afternoon with a 2-1 victory over fellow MLS farm team, Real Monarchs SLC in front of 1,453 fans.

With all the talk of the team developing young Canadian talent, it was perhaps fitting that it was two BC boys, and Residency alumni, that got the goals for the Whitecaps on the momentous day.

Caleb Clarke opened the scoring with a deflected effort in the 21st minute, his third goal of the season, after some nice build up work by Chris Serban and Tyler Rosenlund.

Ben McKendry added the second 12 minutes later, the first goal of his pro career, finishing off a great cross from Victor Blasco, who showed some great control in the build up and cut the ball back perfectly for the finish.

The Monarchs pulled one back through a Lucas Baldin penalty with eight minutes remaining, after Jordan Haynes brought down RSL’s homegrown MLS player Sebastian Saucedo in the box.

But after giving up a late equaliser against OKC Energy last weekend, there was to be no way back for the Utah side, who were reduced to ten men when Phanuel Kavita, another of the RSL’s MLS players, picked up a second booking for a foul in the last minute.

Vancouver looked the more dangerous team throughout, creating a number of chances but finding the Monarchs a tough team to break down at times. Real had chances of their own and did trouble the ‘Caps at times, without finding a way through.

“It’s nice to win obviously,” Koch told AFTN after the match. “It’s been a long time coming. The only other win we’ve had was in the second game of the season so it’s been a few weeks.

“Give the guys credit. They’ve worked very, very hard for several weeks now to get that win. They’ve been getting sick and tired of tying at home, so I was glad that we could turn that round and get the three points today.”

Both teams had nine shots apiece, but Vancouver will disappointed that they appear to be mirroring the MLS side by creating some dangerous opportunities but are being let down by the final ball and the lack of clinical finishing.

The defensive side of their game, and in particular not falling to another late goal, was more pleasing to Koch, but he wasn’t so delighted with the overall team performance over the full 90 minutes.

“We worked hard, but to be brutally honest, for the first 45 minutes I thought we weren’t very good,” Koch added. “We worked hard, we kept our shape, but they’re a very, very good footballing team. They did good at keeping the ball. They made us run around all over the place and obviously we got a little bit tired.

“But give our guys credit. The last ten minutes they score and we think, oh here we go all over again. But we hang on and showed the character to get the job done.” 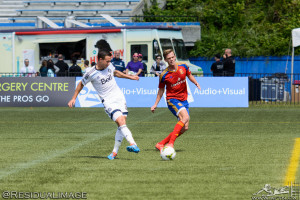 That aspect of the Caps having to chase the ball and the Monarchs was certainly something matchwinner McKendry noticed as well.

“It’s credit to RSL, they came out and tried to play,” McKendry told reporters after the match. “For large parts of the game, they made us chase. I think that’s something we’re not quite used to yet. Usually we’re a team that likes to keep the ball. We did well to stay as a group. We’re opportunistic and got those two goals which ultimately won us the game.”

The win moves WFC2 on to 9 points and a 2-4-3 record, four points off the last playoff place with a game in hand.

The team is still clearly a work in progress, with all the chopping and changing of the starting line ups making it difficult to establish complete chemistry and establish a rhythm. You get the feeling it’s very close to coming though and the last couple of performances have been marked improvements on some of their early season displays.

“We get better every single day,” Koch feels. “As I said, I wasn’t that impressed with our performance today. I’d like to go watch the video, sometimes you get a different perspective from that. I was very happy with going out and obviously grinding out the result.

“But our group, collectively, is getting better and better all the time. Our young guys in the team are improving and our older guys are grabbing the opportunities they’ve been getting. It’s nice to see us rewarded today with the three points.”

Amongst those older players are two Americans with MLS experience. Billy Schuler played with San Jose Earthquakes last season and has played in eight of Vancouver’s nine USL matches this season, starting three and grabbing two goals. Ian Christianson had two seasons with New York Red Bulls, but came to WFC2 rehabbing an injury. The midfielder got his first start with the ‘Caps against the Monarchs, after two previous brief substitute appearances.

Both players were brought in to add some experience to a very young WFC2 team and Koch feels that what they bring to his side will be important in the latter weeks of the season.

Although fans haven’t seen either player in full flow yet, Koch is confident the best is still to come from both guys.

“They’re obviously a little bit older than our teenagers essentially,” Koch said. “They’ve got a little bit more experience. Both of them had good college careers and obviously have been in MLS. This is almost a second opportunity for them to see if they can do the same thing that they’ve done before and get themselves back into the league. It takes a little bit of time.

“Billy started with us and he wasn’t a 100% match fit. His match fitness is obviously a lot better now. Ian’s been riddled with injuries. So we’re integrating them and they’ve started to do better and better. Billy’s scored a couple of goals and he’ll hopefully continue to improve as the season goes on.” 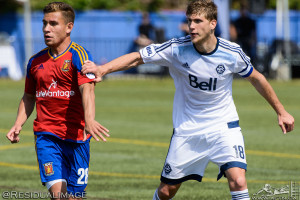 Another experienced player turning out for WFC2 today was Diego Rodriguez, who played 64 minutes, and captained the side, in the centre of defence on his return from the injury he picked up against Columbus on April 8th. He looked sharp, composed in his own box and a danger at set pieces in the opponent’s area.

We’ll have more on Rodriguez on AFTN later, but it was great to see him back and looking like he can add to the Caps in MLS. The Uruguayan was delighted to be back playing again and came through the game thankfully unscathed.

“I feel very good,” Rodriguez told us after the match. “It was a good game, it’s a good group and we wanted to win. I felt very comfortable on the field and felt very happy.”

The ‘Caps are keen to make it seven points out of a possible nine against an Arizona side who are currently sitting in fourth place in the West, four points ahead of Vancouver with a 4-4-1 record.

It’ll be a tough game but everyone at WFC2 is keen to build on today’s win and will be meeting an Arizona side coming off the back of a 3-0 US Open Cup defeat to unheralded (and relatively unknown) Californian amateur side Chula Vista Futbol Club on Wednesday and a 5-0 hammering in ULS action by Colorado Springs Switchbacks on Saturday.

“There’s no easy games in this league. The Western Conference is proving that right now. We played against Real Monarchs, who are near the bottom with us, and they’re a good footballing team. There’s no easy games. We’ll be up for the challenge and hopefully we can get the same sort of result.

Kick off is at 2pm at Thunderbird Stadium next Sunday, so get out and support the future if you can.