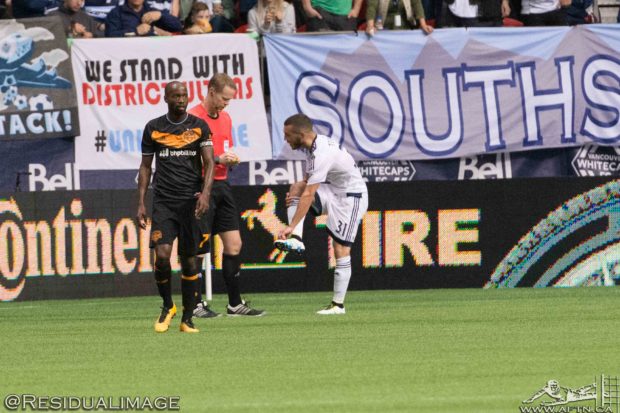 Much is being made of the Whitecaps discipline, or lack thereof. An astronomical number of six red cards and 30 yellow cards through 15 matches, with an added handful of supplemental suspensions to Christian Bolanos, Kianz Froese, Masato Kudo, Kekuta Manneh and most recently to Kendall Waston, have led to questions surrounding Vancouver’s ability to acquire the control needed to stay in the law’s good graces.

However, discipline must be applied a reference point of a set of rules or orders to be obeyed. And that’s where the real issues crop up. The league took a stance entering 2016 that it was going to take player safety more seriously and clamp down on fouls which endanger player safety. No one would fault the league for that attempt if they were accurate and equitable in their enforcement. Instead, after the head of the Professional Referee Organization doubled down on their new priorities by claiming that the league and its officials will not waver on their direction and that it would be players that would have to change.

Almost immediately following that, the league seemed to have wilted to the pressure and do exactly what Peter Walton said they wouldn’t. The so called dangerous tackles, including upward facing studs and extended legs, which previously were punished with red cards or supplemental discipline were passed over, such as Will Johnson’s two footed lunge into Diego Valeri in Portland.

Officiating is likely not a topic that any fan of any league will hail as perfect, but the breadth of blunders witnessed in MLS of late has gotten comical.

Combine that with the general lack of consistency regarding what a foul, or a handball, or a yellow card is within a game, never mind between different officials.

The Whitecaps suffered another headscratcher versus Houston, with awkward decisions being made such as a yellow card to Russell Teibert for having an opponent run into the back of his heel and in the process have Beasley’s studs catch in Teibert’s laces.

The biggest decision of the game was made after Houston midfielder Alex went in heavily to the knee of Morales. Pedro reacted with a shove to Alex’s chest, and Alex responded with a couple of shoves towards the head of Morales.

While Alex was clearly the aggressor in the situation, no one would have taken issue with a yellow to each player for their involvement in the handbags. Yet the card count rises and the Whitecaps not only lost their most influential playmaker on the park, but also will be forced to face New England now without Morales while already working with a depleted line-up due to international duty.

It seems clear that the Whitecaps are being heavily scrutinized by both the referees as well as the Disciplinary Committee as they’ve grown a reputation as a dirty team. Only a week prior, a controversial penalty for a questionable handball on Pa Modou Kah, followed shortly by a marginal yellow card for a Jordan Harvey tackle that lead to a goal, caused the Whitecaps to absolutely unravel.

You have to sympathise with the players. It seems that every game puzzling decision by officials and nameless committees are chipping away at the fortitude of the Whitecaps’ entire organization. It’s no excuse for late and reckless tackles, but if you put 22 testosterone fuelled professional athletes on the same pitch to play a physical game at full speed with so much on the line, and then use a magic 8 ball to make critical game changing decisions, it’s hard to see any other result than frustration and outrage.

And so the cycle continues of players not knowing what the officials will adjudge to be within the laws, having critical decisions go against them, reacting poorly, being punished for their unsportsmanlike play, and then being a further target for next week’s arbiter.

The practical concern is that Carl Robinson is nearly half way through the season and has yet to be able to select his preferred line-up since he’s constantly playing a player or two short due to suspensions or international call-ups. There have been moments this season where it seems that if Vancouver were able to put their best team on paper on the pitch for a few weeks in a row that they could really charge up the table.

For the Whitecaps, however, it seems that the only way to solve this problem is not by hoping for the officiating to fix itself, and rather to turn the other cheek at any perceived mistreatment and instead focus their frustration into overcoming a situation that feels like everyone is pulling against them.