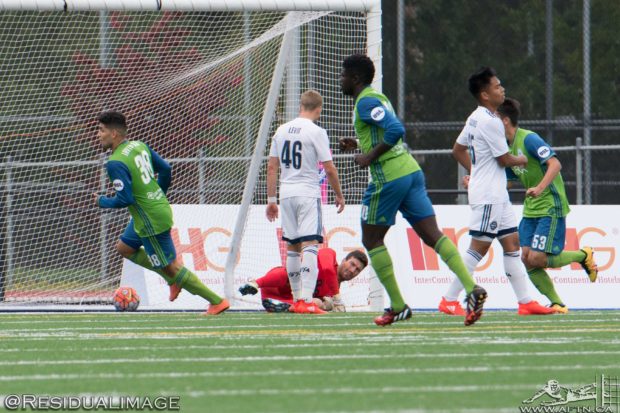 It’s not been a fantastic long weekend for Vancouver Whitecaps sides.

WFC2 set the ball rolling on Friday night, giving up the lead and then a 95th minute goal to go down 2-1 at Seattle Sounders 2. On Saturday, the MLS team lost, and were blanked again, at home to New York Red Bulls. The U18s grabbed a 3-1 victory against Sacramento Republic on Saturday, the only real success of the weekend, before going down 2-0 to Real Salt Lake AZ on Monday, while the U16s lost both their matches 2-0.

When Marco Bustos fired WFC2 ahead just three minutes in at home to Seattle on Monday, followed by Kyle Greig crashing a fierce 17th minute strike off the crossbar, it looked like the holiday weekend would end on a high, but it was to be another laboured performance from the Whitecaps, as they let the Sounders tie things up in the 21st minute with a Jordan Schweitzer goal that caught the ‘Caps defence standing.

Both sides were denied the go-ahead goal just before the half, with Cole Seiler seeing his header saved on the goal-line and Sean Melvin coming up with a huge stop at the other end.

The ‘Caps looked very much in the ascendency again five minutes into the second half, when Alphonso Davies’ skill and pace saw him break free in the box before being brought down. Bustos stepped up to drill home the penalty and his second of the afternoon to put Vancouver back ahead.

And it should have been game over when Seattle’s Zac Mathers was sent off for a lunge at Brett Levis moments later, but full credit to the ten man Sounders who fought back and earned a point with Schweitzer’s second of the game, when he headed home the equaliser with ten minutes remaining.

A disappointing end, to a disappointing weekend, but WFC2 head coach Alan Koch felt his team got what they deserved against the Sounders.

“We didn’t deserve three points today,” Koch told us after the game. “I thought we were a little bit better in the second half and showed the desire to go at them a little bit more. In the first 45 minutes, we weren’t good enough. Our three players in the centre of midfield were not as good enough as their three players.

“We challenged them before the game that you’ve got to control the game. If your heart of the midfield actually steps up to the plate, that gives you a chance to go out and win a game, and they weren’t good enough in the first 45 minutes. I thought we were better in the second half but if you don’t play for 90 minutes at this level, you’re not going to win many games.”

Of the midfielders, Kianz Froese started his second straight game after returning from a training stint with German side Kaiserslautern, but was replaced midway through the second half.

Alphonso Davies and Daniel Haber both showed glimpses on the wing, but have had better outings, while Marco Bustos had mixed success in the number ten role. 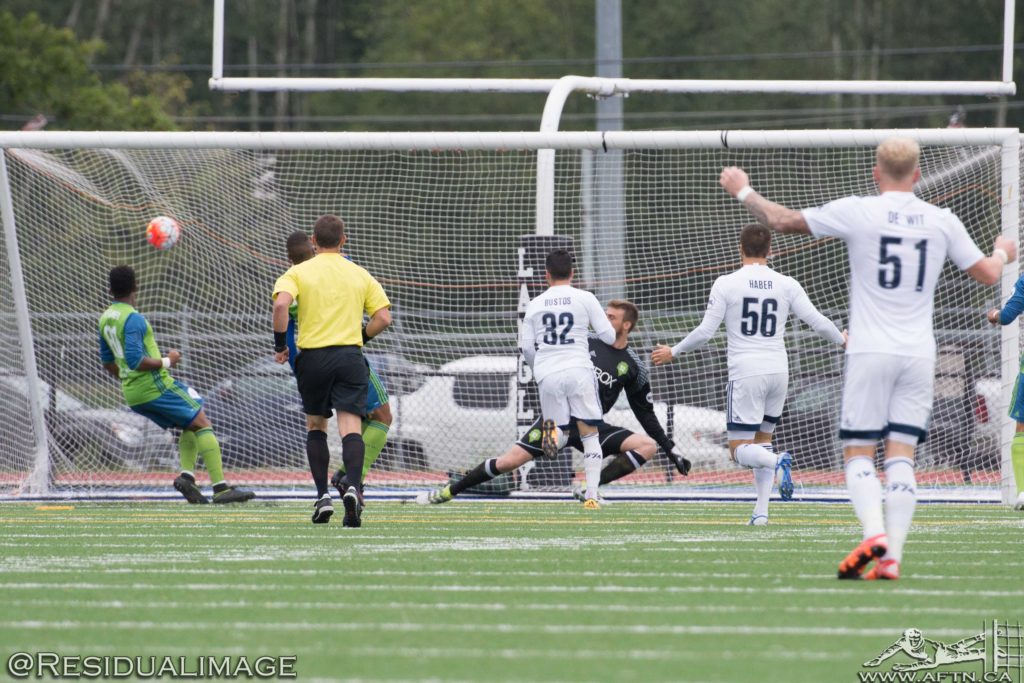 Bustos wasn’t involved in Friday’s game, as he was in the mix for a place on the bench for the MLS side against New York. Having missed out on that too, he was clearly fired up, keen to make an impression and grabbing his first goals in six games.

“Yeah, he was fired up to score a goal that early,” Koch agreed. “And a great goal. He finished it, but Kyle [Greig] did a great job setting it up and a great ball from Cole [Seiler] in to Kyle. Marco was the one who scored it, but it was a great team goal from that perspective. The second one is a penalty kick.

“I thought he played well in fits and spurts. He obviously scored two goals, but we do ask the players to do a lot in and out of possession, and you’ve got to make sure you take care of both sides of the ball to have a successful performance. So he was good at times, and I liked his energy. But it wasn’t perfect by any means and he knows that and he has to continue to get better.”

It was a stop-start game all round, to add to the Whitecaps up and down performance, with the referee dishing out one red card and eight yellows. It could have been even more of both colours, with several players on both sides lucky not see pick up second bookings.

There was an incredible 48 fouls called, 24 for each side, in what certainly didn’t feel like a chippy or dirty game, but when there’s that amount of stoppages, it’s hard for either team to find their rhythm.

“I think we’ve seen that in a lot of games we might have watched recently in this city,” Koch said. “Where stoppages take away from momentum. When you’re playing at home, you want to have the momentum. I think we had momentum at times in the game. A couple of calls weren’t exactly how I thought they should have gone and that does influence the game.

“Having said that, you don’t fault the referee, you don’t fault anybody, we look at ourselves, and the best thing you can do as a group like this, and a young professional footballer, is self-reflect. And make sure you have accurate self-reflection so you know what you need to work on, so you can address to help you impress and get better.”

Drawing any home game is disappointing, as is dropping any points to Seattle. To play the Sounders twice though in the space of four days and only take away one point is a big missed opportunity for Vancouver, and may prove to be particularly costly in the race to the postseason.

So does Koch hold up Seattle now as an example of what fight he should be getting from his own team at the moment?

“We said to the players before, you’re going to play a professional football game for three points and you’re playing in a Cascadia derby game,” Koch told us. “What more motivation do you need to come out and play and give everything you can? 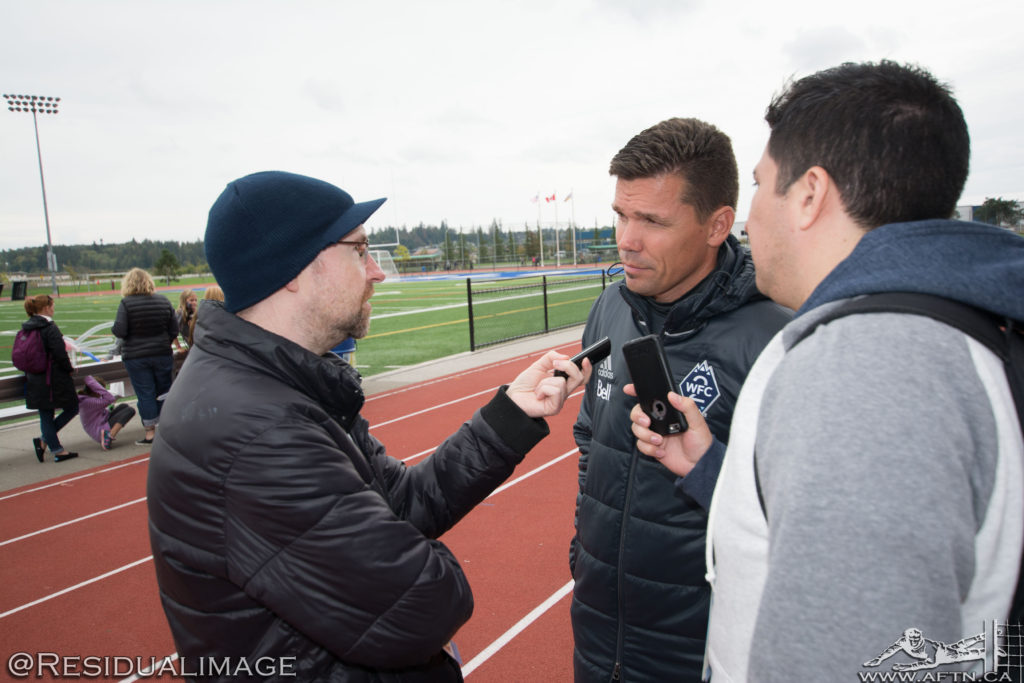 The ‘Caps are in danger of undoing all their good work from the start of the season, which saw them unbeaten in their first ten matches. But it’s the old adage of it’s not how you start, but how you finish, and we saw that in last season’s USL playoffs and the teams hitting form at the right time.

WFC2 have only won one of their last eight games, half of which have been at home. Monday’s draw with the Sounders was only the seventh point they’ve taken in that spell and they’ve slipped down the table as a result, currently sitting fourth in the Western Conference standings, with three games remaining.

The ‘Caps haven’t officially claimed their place in the playoffs, they technically still need three more points, but it is all but assured. The top eight teams make the postseason in the West, with the top four hosting the first round of the knockout stages.

“The cool thing is that it’s three meaningful points,” Koch said. “And you’re playing for playoff implications. We haven’t qualified for the playoffs yet, so we’re trying to fight to get whatever we can and they’re going to be doing the same thing.

“It’s going to be our younger group against their group, and we know their group quite well, who are all professional footballers. It’s going to be a big challenge, just like today was. But we’ll have a good week at training, get this one behind us, and get ourselves ready for another big game.

“We’re enjoying playing meaningful games. I think last year we were out of the playoffs with three games to go. At this time, we were done. It shows how far we’ve progressed as a group and how far the young, individual players have come.”

Which is certainly very true.

WFC2 finished second bottom of the West last season and already have three more wins and 12 more points from one less overall game so far this year. It’s been a tremendous turnaround, and despite their recent dip in form, and however the season plays out, Koch is delighted with what his group have achieved this season.

“If we take a step out of just this micro game, to be where we are as a group, is fantastic,” Koch added. “We’re five points off first place in the league, with the young group that we have and giving the players the opportunity that we have, if you’d said that to me at the start of the season, I wouldn’t have believed you. So to be where we are, if fantastic.

“We don’t want to get too caught up in the individual game, in the struggle of the last few weeks, we’ll take a big step back and really reflect. Having said that, we’ve still got three big games to play and we’re fighting for everything. They’re three development opportunities, where we’re playing for meaningful points, which is great, but we need the guys to step up for the full 90 minutes.”