The next week is going to have many Caps fans acting like kids at Christmas. As the countdown gets lower, the excitement keeps building. Six more sleeps!

For those of us lucky enough to have a sneak peak at yesterday’s Colorado Rapids match, it was great to see Empire look like the Caps home and it certainly has all the looks and feel of a proper football stadium.

As a Lions season ticket holder, I’m used to seeing the place bedecked in orange, but it was blues and white everywhere yesterday. 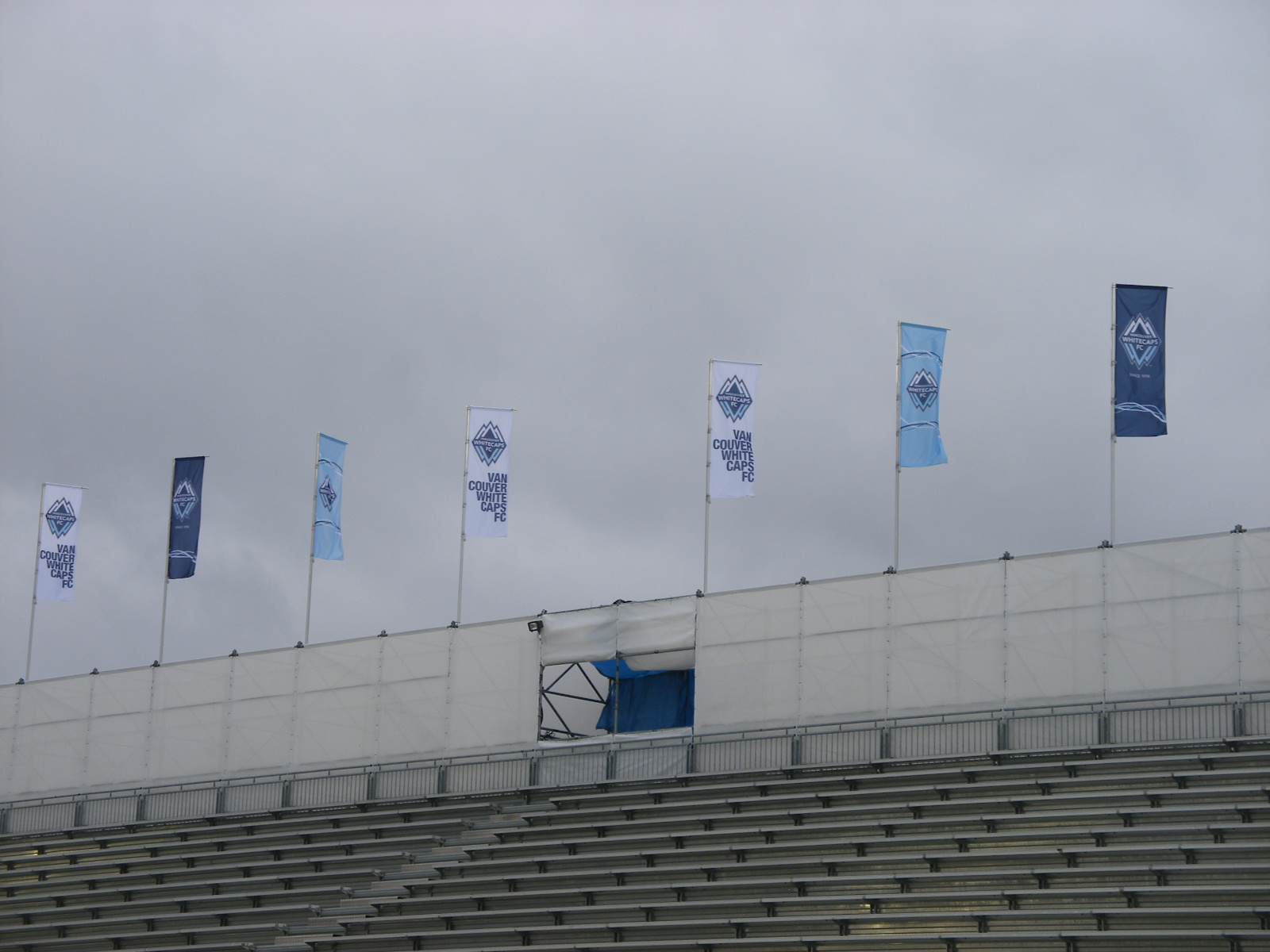 I can only begin to imagine the emotions that will go through those Caps fans who watched the birth of the Caps at the original Empire Stadium.

It was the Caps home for the birth of their NASL era in 1974 and it’s wonderfully fitting that it will mark the birth of our new MLS journey. Despite it’s flaws, I’d still be happy to stay there instead of making the move to BC Place. Whether I still feel like that after seven months and once I get to stand inside the new BC Place, I dunno.

One thing Empire will definitely be though is loud as hell.

Whether you’re the Southsiders, the drumming section, another supporters group, a soccer mum, a kid, just your average fan or even the Caps themselves, the one thing we all want to make Empire Field is a fortress and a cacophony of noise.

The metal structure of the stadium is made to help make this happen.

Even with just a couple of thousand people there yesterday, once the stamping of feet begins and spreads, you’re generating a hell of a lot of noise.

I can testify from the Lions games that when you have 20,000 plus people ‘banging the floors’, the noise is absolutely deafening.

The roofs and overall acoustics are great for a sporting crowd.

One slightly disturbing aspect from yesterday’s match was that the drum section across in the east grandstand appeared to have been mic’d up, with the noise being pumped through the speakers in the west grandstand. At first the levels were high, but this was then honed as the game went on. Just for yesterday or are we going to initially see some artificial atmosphere generation till things get in full swing?

I really don’t think we need it if the small number in attendance yesterday are anything to go by. Vancouver definitely has the potential to have one of the loudest home crowds in MLS.

A concern for some may be their sightlines.

We were down in rows one and two in the westside yesterday (we couldn’t get into the Southside as there was no security for there), in the blue/yellow southwest split. 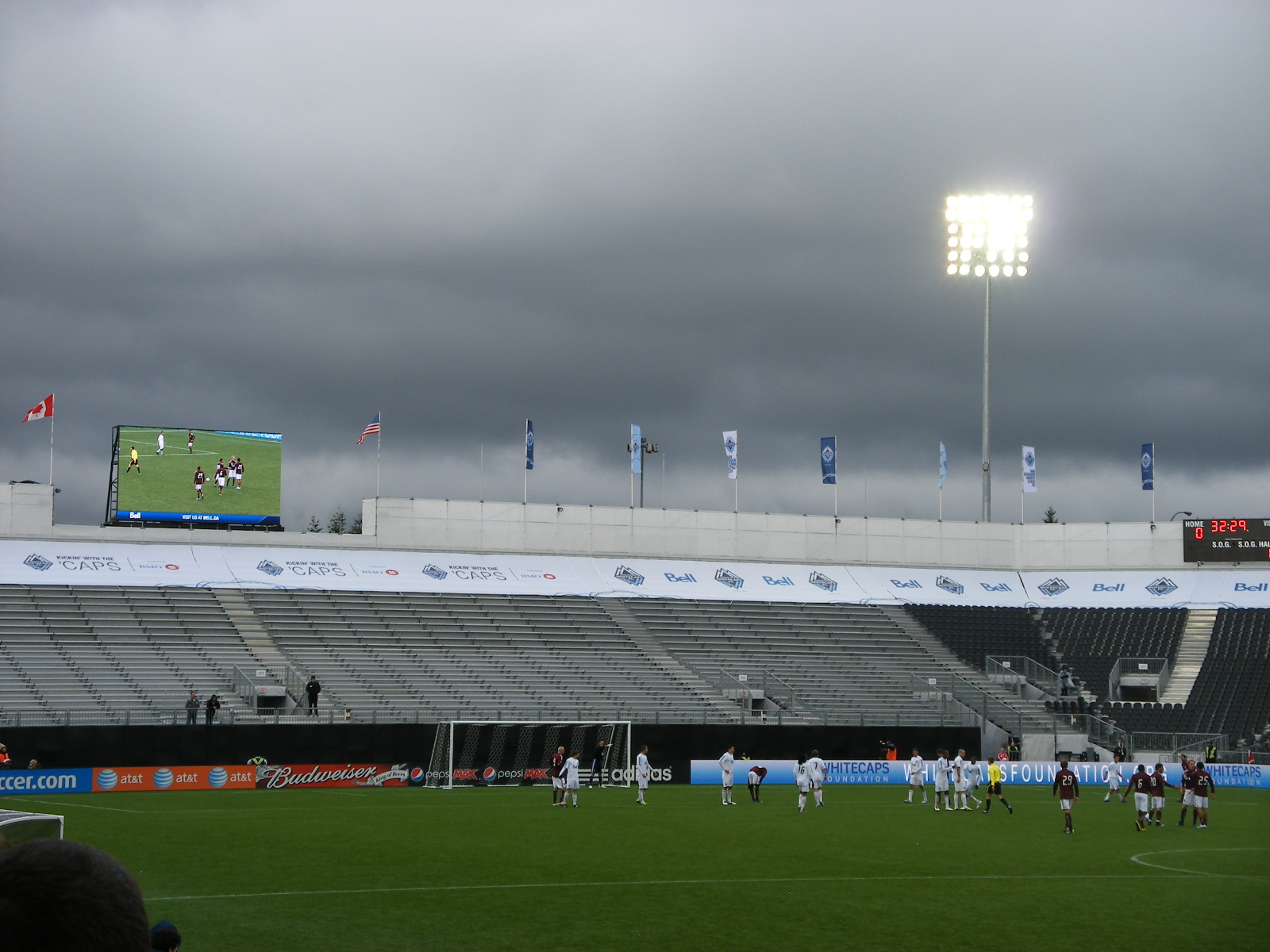 What became clearly evident was that those down in the front rows of the east and west stands aren’t going to have the best views of some of the action.

The advertising boards are very close to the pitch. From where we were, you couldn’t see the sidelines at all from the front few rows and that was with us standing. You had no real idea as to whether the ball had crossed the line or not.

Apart from not being able to see the sidelines, the dugouts also block some of the pitch, especially looking along to the corner.

Considering the prices of the purple, blue and yellow seats, this could lead to some angry calls to the Caps. Them’s the perils of being at the front and close to the action though.

We have no real idea, just yet, as to what the views from behind both goals will be like, but from some photos I’ve seen, it’s going to be the same there too. In fact parts of the net in some sections appear to obstructed.

I know that my 8th row, east stand Lions seat has given me no end of similar problems last year.

Some of the advertising boards are of the state of the art, digital variety. Really smart and professional.

The top few rows in a lot of the sections also have Bell banners covering them.

One person gloriously missing in action was Winger. Our bird flu dream may be alive and well. Let’s hope the Caps haven’t given me false hopes and expectations!

As for the Southside, it was looking mighty fine in all it’s wet glory. 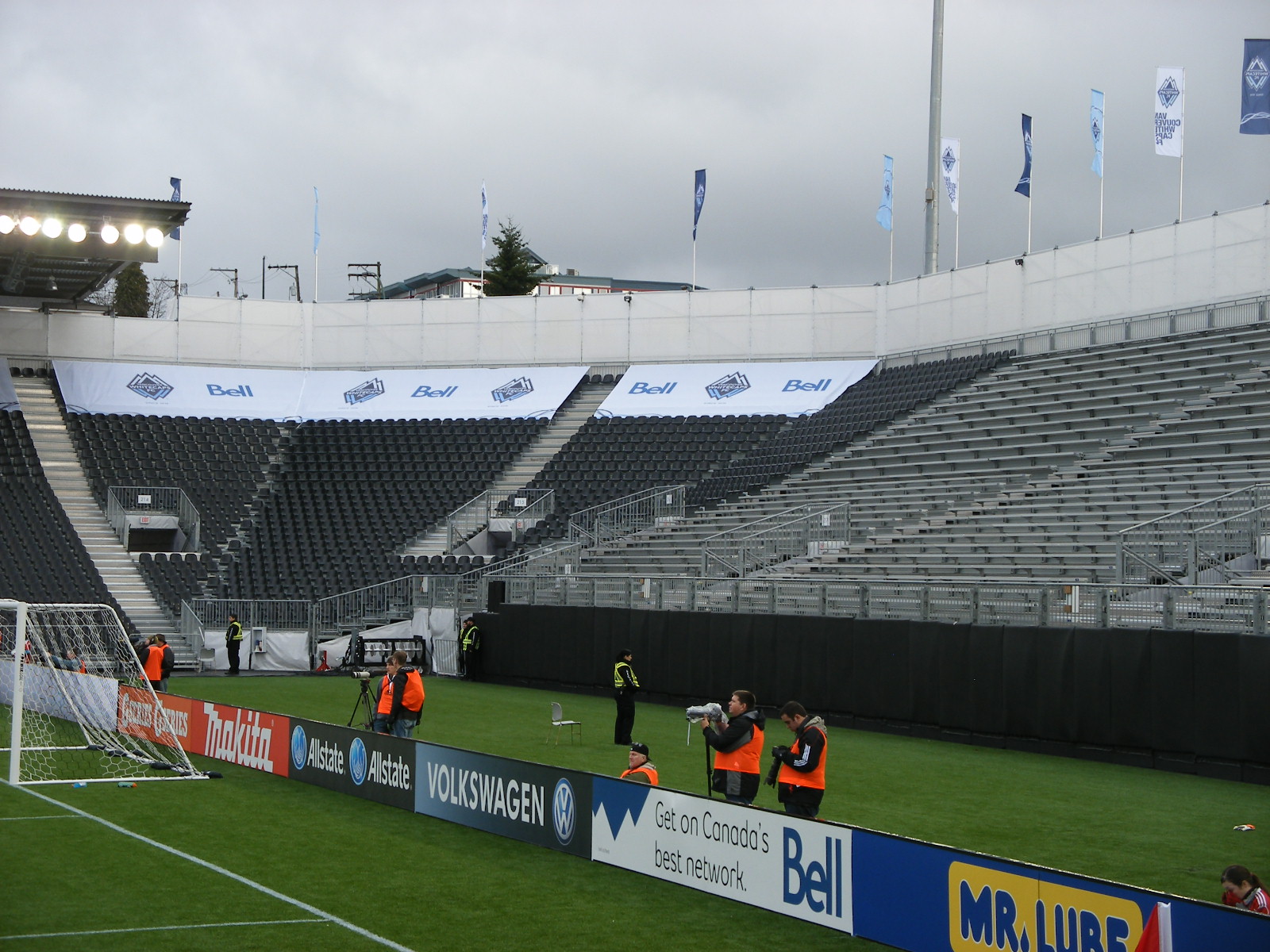 Talking of which, the stadium becomes a bit slippery in places when wet if you’re not in the right footwear.

I almost fell arse over tit as soon as I entered yesterday and that was with no alcohol before any smart remarks!

Just be careful on the stairs and the bleachers. Keep yourself and those around you safe and accident free.

It was a freezing and dreary afternoon. I loved it! It was just like being back at Bayview. Football’s meant to be played in these outdoor conditions. Hopefully our players will adjust to it quickly, as that could also be another advantage for us. Should we maybe look for players with webbed feet?

Overall, it was a great trial run for the Caps. They’re definitely going to be putting on a fantastic gameday experience for everyone attending and the stadium will look magnificent when full and in all of its glory.

Everything seemed to go pretty smoothly and the fans that did make it along really seemed to enjoy the occasion, even if the game itself wasn’t one of the best we’ll see this year.

The merchandise tents also seemed to have a good selection of stuff to buy, which will please many who have been asking. I’m sure there will also be a lot more to come.

With the days counting down and the anticipation reaching fever pitch, Empire Field is going to have a big part to play in how everyone’s season plays out both on and off the pitch.

It’s a great stadium. Made for football. Made for noise. Make the most of it whilst we have it.