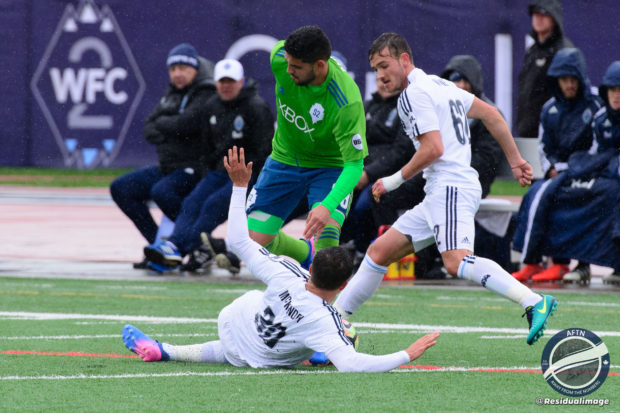 WFC2 head coach Rich Fagan has only been in the job for six weeks, but with a win, a draw, and a defeat now under his belt, we’re starting to get a good idea of how the young ‘Caps will be playing with him at the helm.

There’s a lot of heart and team spirit around WFC2 this season. You see it at training and you’re seeing it on the pitch in matches. The latest example of which came in Saturday’s 3-0 win over Seattle Sounders 2 in the ‘Caps home opener at McLeod Stadium in Langley.

It was a hard fought team effort for the depleted squad, but goals from Deklan Wynne, Andy Thoma, and Ben McKendry saw the ‘Caps through and Fagan was delighted by the overall team performance.

“It was very good from start to finish,” Fagan told AFTN after the match. “We changed some things tactically during the week and I thought their application was excellent and we got what we deserved.”

The biggest tactical change came in the team’s formation, switching from the usual 4-2-3-1 to a much different 3-1-4-2 that saw a back three of Cole Seiler on the right, Francis de Vries in the middle, and Dominick Zator left. All centre backs, with fellow CB Sem de Wit playing in front of them in a holding role.

It was a very unique set up, but one that paid off well and allowed them to switch to a 4-4-2 for the second half when they made their subs. It was also interesting that the switch came the same night the MLS team went with three of the back, to a lot less success.

So what was behind the thinking of the new look formation?

“It was just the balance of the squad was right this week,” Fagan told us. “Some injuries to some key guys, but the ones that were left kind of fit that role well and it worked, so pleased.”

Zator was making his professional debut after signing for the ‘Caps last month from the University of Calgary. The centre back has previous USL experience in the PDL with Calgary Foothills and looked a good prospect out there in the 68 minutes he played, and Fagan liked what he saw.

“He was very composed,” Fagan said. “A very good attitude and focus and concentration. It served him well today, and that’s not easy. He’s done well.”

Saturday’s win sees the ‘Caps move up to 7th place in the USL Western Conference standings and into the playoff places after their first three games. Obviously there’s a long, long way to go in the season but it’s been a promising start for the team.

They were unlucky to fall behind in their first game against LA following a defensive mix up, before going down 2-0. Last week saw them grab their first point of the new season with a 1-1 draw at new club Reno 1868, in a game they had chances to win in a strong second half showing.

But with four points now from their first three matches, how would Fagan sum up the ‘Caps start to the season so far?

“It’s been good,” Fagan feels. “The first game of the season, okay, we maybe didn’t get three points, but I thought there was some good moments. Certainly last week we did enough to win the game against Reno, crossbars, posts, just wide, and then obviously it was a pretty complete performance today.

“But we’ve played well in all three games. Now it’s just about kind of building and going forward together.”