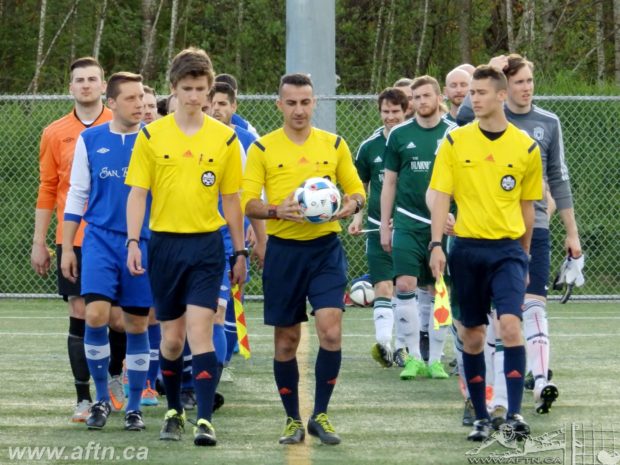 And then there were eight.

Last weekend’s First Round proper in the Keith Miller Provincial B Cup (I really don’t know why it’s not the second round and the preliminary round the first round) produced some expected results, a shock or two, and saw our favourites for the title move on and seemingly set on a semi-final collision course.

The top half of the draw is shaping up nicely, albeit in a slightly controversial manner.

VMSL Division 2 Cup Champions NVFC Norvan Storm were in fine form in seeing off Richmond League side 3-1 on Sunday afternoon. That win now sets up a tasty looking tie this coming Sunday when they welcome BMSL champions Sierra FC to Windsor Secondary School.

The Burnaby boys were in clinical form against VMSL side 13th Legion at Burnaby Lake on Sunday, coming away with a fairly comfortable 3-0 win. They certainly didn’t blow the Legion out of the water, and the visitors had their own chances, but it was an assured win with Sierra in little trouble throughout the match. 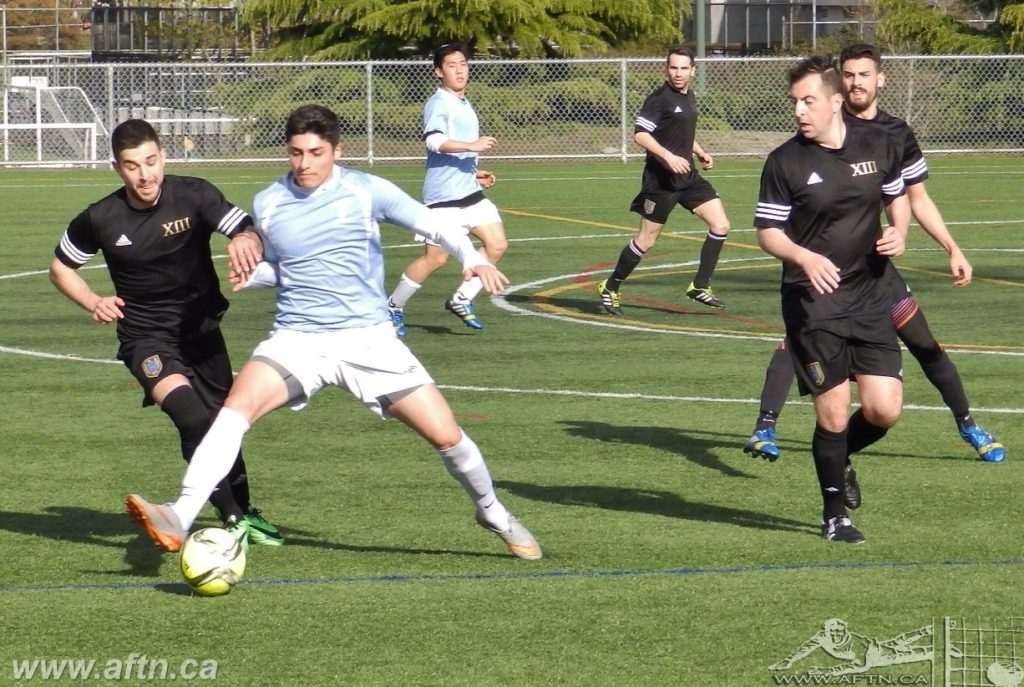 Sierra FC got off to the perfect start when Lucas Camargo headed them into a 4th minute lead. It was a tough tackling game, with the referee letting a lot go, and you had a feeling things could boil over at any point, which it actually took longer to than we thought!

The Burnaby champions only lost one game on their way to the title, conceding less than a goal a game, and 13th Legion were having trouble breaking them down. Their best opportunity of the first half came in the 33rd minute when Enis Zildzo shot wide, but the Sierra keeper Milad Shahboudahian was seldom tested.

Sierra pressed for a second and Camargo nearly grabbed his when he curled a shot from the edge of the box just wide in the 37th minute. It was just to be a brief respite for the Legion and Sierra made it 2-0 a minute later when the ball broke to Pablo Clinaz in the box and he fired home with ease.

Legion must have still felt they had a chance to get back into things, but two minutes into the second half it was effectively game over when a Sierra attacker was flattened in the box by Legion keeper Mike Venditti. The VMSL side certainly weren’t happy by what they felt was a soft decision, but Sierra captain Daniel Accetura didn’t care and stepped up to drill home the penalty to make it 3-0.

13th Legion’s best chance to get back in to it came in the 66th minute when a diving header by Andre Chahwan flew wide.

Tensions rose a little and boiled over with eight minutes remaining after a tackle, in an incident that saw a lot of pushing and shoving, two bookings, and Sierra’s Ercin Karaka sent off for a second yellow, which could easily have been a straight red.

That was to be the end of the action and Sierra moved through to the quarter-finals with a comfortable 3-0 win and from the quality of football I saw on display for them during the match, they’re a free flowing side that has a real shot at the Cup this year.

You can see all the goals (the second one is super blurry) and more from the match in our video below.

The top half of the B Cup draw looks stacked. Whoever gets through between Norvan and Sierra is likely to face our other favourites for the trophy in the semi-finals.

VMSL Division 2A winners Burnaby Metro Athletic have made it through to the last eight without having to play a game so far.

With a preliminary round bye, the seeded Burnaby lads were meant to be playing BMSL side Bacardi FC in the first round on Saturday afternoon. With one of their players getting married that day, Bacardi gave three other possible dates to play the match. Burnaby Metro refused, in part due to them playing in a 7-a-side tournament on the Sunday, and in the end Bacardi were forced to forfeit the game.

Will that lack of activity leave Burnaby Metro a little rusty for their quarter-final match up with Fraser Valley Red Devils on Saturday afternoon? The FVSL side have already sprung a surprise, knocking out RASA champions AC Richmond 3-1 in the first round, and they’ll fancy their chances in the last eight.

The bottom half of the draw looks to be wide open.

FVSL Division 2 champions Poco FC Royals saw off their Fraser Valley compatriots Langley Utd Dynamo 1-0 in the first round, setting up an interesting clash with VMSL side FC Serbia United in the quarter-finals.

The Serbians travelled to the island and knocked out the last remaining VISL side, Mid-Isle Mariners, 2-1 and this should be a cracking match on Sunday afternoon which could go either way.

Another VMSL side that will fancy their chances are Vancouver Greencaps, who have found their shooting boots in the competition, hitting eight goals in their two matches so far, three of them in their come from behind win against BMSL Rudolph Cup winners Impero Calcio at Burnaby Lake on Sunday evening. 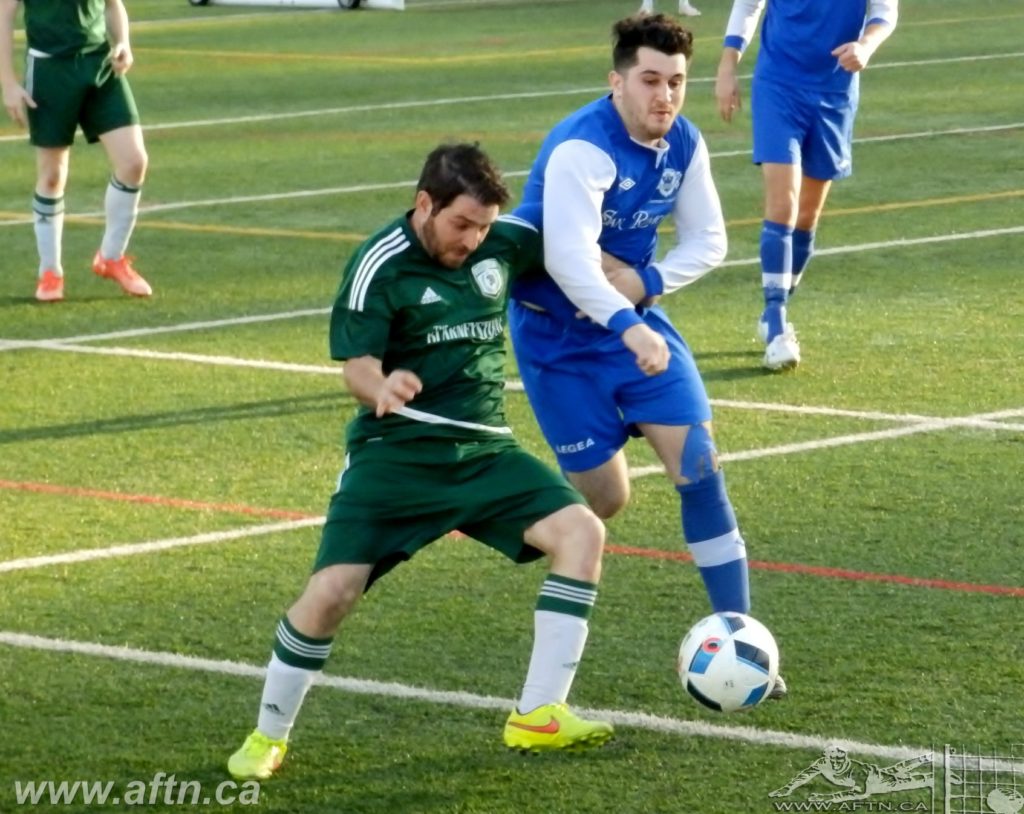 It was a frenetic opening ten minutes to the match that saw three goals, two penalties, and it could have been even more.

Impero Calcio came out of the traps fast and when Anton Krapic was shoulder barged down in the box just three minutes in, the referee pointed to the spot. Bruno Teixeira stepped and buried it low into the bottom left corner and it was 1-0 to the Burnaby boys.

Undaunted, the Greencaps immediately went up the pitch and levelled things up with a deft finish from Gary Mulvaney in the 5th minute. Five minutes later and the Greencaps got a penalty of their own after a lunge in the box and Dave O’Connor converted the spot kick to give the VMSL side a lead they were never to surrender.

The Vancouver side nearly made it three on the half hour mark when Patrick Fitzgerald hit a neat curler that looked goalbound but Impero keeper Marco Caporale produced an excellent diving save to turn it away.

The Greencaps nearly made it three just three minutes after the restart on a quick breakaway, but Mulvaney’s shot across goal just missed the back post.

Impero Calcio started to turn up the pressure for the equaliser as the half wore on and looked the more likely to get the next goal. Lucas Sweda had a chance in the 73rd minute but collided with Greencaps keeper Kevin Hughes. Two minutes later, Sweda was played through on goal from his own half and Hughes came rushing out of his goal missing the ball and the man but doing enough to put the Impero player off and allowing James Kind to get back and clear.

Those missed chances were to cost the Burnaby side dear as the Greencaps added a crucial third in the 76th minute. Aaron O’Dwyer did well out wide and played a give and go with Fitzgerald inside the box, whipping the ball across goal and Mulvaney grabbed his second of the game from close range to inflict the killer blow.

Impero Calcio pushed hard in the last ten minutes but Hughes was in excellent form, first keeping out Teixeira with a leg save at his near post in the 82nd minute, after some nice footwork in the box by the Burnaby player, and then turning a low effort around for a corner four minutes later.

That was to be it and the Greencaps march on.

You can see our video highlights of the match, including three of the goals, on the video below.

Vancouver Greencaps now get home field advantage in the quarter-finals when they take on FVSL Division 3B champions Fraser Valley Blue Devils.

The Blue Devils are full of confidence after their shock 2-0 win over VMSL Division 2B champions Burnaby Selects White Eagles in the first round. This could be a cracking last eight encounter.

We’ll bring you our full B Cup quarter-final preview later this week. In the meantime, if you want to plan your weekend live football viewing, you can find all the venues and kick off times for the four quarter-finals HERE.