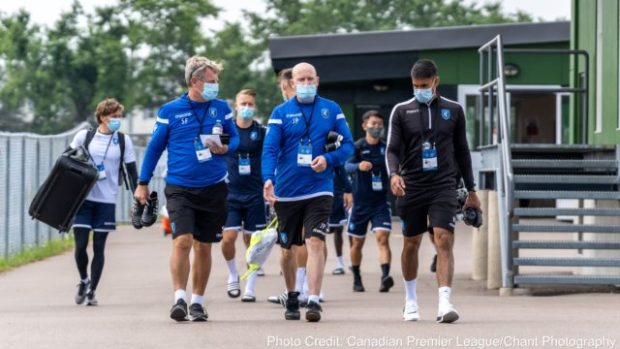 FC Edmonton find themselves in the strange position on Sunday of being the final team to take to the pitch in the Canadian Premier League’s Island Games tournament.

Their opponents, Forge FC, already have a game under their belts, drawing 2-2 in the tournament’s opening match with Cavalry FC on Thursday night.

Cavalry are Edmonton’s second opponents, in the latest edition of Al Classico on Thursday, and the chance to see both in action early has given the Eddies camp a bit of a head start when it comes to the scouting of their opponents in a tournament in which no-one really knows yet what to expect from everyone.

“It was great to see both Forge and Cavalry go at it [on Thursday],” Edmonton forward, and club captain, Tomi Ameobi told us. “I don’t think the way it played there was too much that surprised us, but they’re our first two games so it was awesome to sit down and see kind of where their strengths were.

“It was more a refresher for us going into our first game knowing that we have to be on point playing against both. They’re teams that like to get the ball down and play, but at the same time, we’ve strengthened in all areas around the pitch, so I think we can definitely be confident going into that game.

“Last year, I think there was only one of the games where we felt we were outplayed. The other games we were the better team. So there’s nothing to fear from our group going into that game, and we’re looking forward to it.”

While Edmonton may have had the chance to have a look at Forge before their match, and perhaps hold an element of surprise to the Hamilton side in that regard, the reigning champions have their own advantages heading into this one. Not only have they got some competitive action under their belts, they’ve also experienced the unique conditions at UPEI Alumni Field.

“One advantage they have is that their players had a chance to get a runabout in a national competition against opponents that aren’t your own teammates,” Edmonton coach Jeff Paulus mused. “[It lets them] get the cobwebs out, get some nerves out. But that being said, we have a couple of days now to prepare for a team that we’ve seen and that we know well. And I say this with all respect to Bobby, as we saw his tactical prowess in last year’s final. Tactically he got it right in both legs. So we know what we’re up against.”

With ten months having passed since the Eddies played a competitive game, and several changes on Paulus’ squad, everyone connected with the team is just chomping at the bit to get going.

The three matches at The Island Games so far have seen a lot of physicality, with hard tackles flying in all over the place and a lot of intensity. That’s perhaps natural when you have groups of players who haven’t been able to do their jobs for so long.

The job for all the coaches now is to harness that to their full potential, while keeping it controlled and not seeing the team tire after running out of gas, and how do you temper that enthusiasm to make sure it doesn’t boil over?

“We don’t!,” Paulus said with a laugh. “For these guys, it’s been a long [wait]. We’ve not been able to play anybody. No preseason friendlies. You’re a lot more reserved, so a lot of them are itching to play somebody that’s not a teammate. So we’ll embrace that.

“We’ll manage the game as far as what parts of the game we’ll be using our energy pressing as opposed to not pressing. We’ll manage that so we don’t have burn out or that we have to change our style in the second half because we’ve been full throttle. As far as challenges, we’re a strong, quick team, so if the challenges start coming in, we’ll just work with that.”