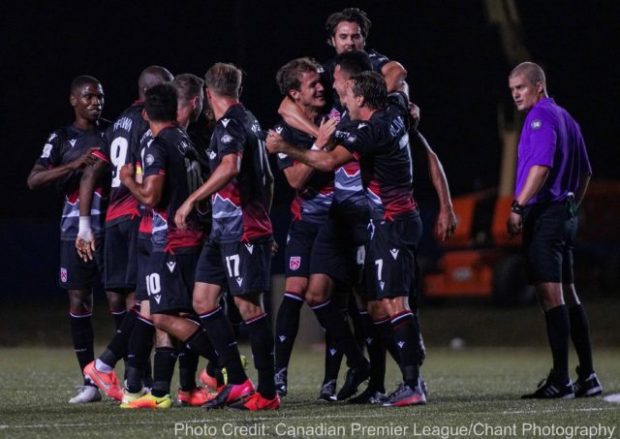 The 2020 Canadian Premier League season finally got underway in Charlottetown, Prince Edward Island on Thursday night, and if the opening clash was anything to go by, we’re in for a pretty fun and intense tournament over the next month.

The CPL fixture makers wisely threw up a rematch of last year’s Championship match up between Cavalry FC and Forge FC to kick things off. They knew what they were doing, they knew what they’d be getting, and they won’t have been disappointed.

Cavalry dominated the early going, taking the lead 11 minutes in through a powerful Dominick Zator header. Forge tied it up against the run of play 15 minutes later, with a nice finish from Anthony Novak.

Despite Forge enjoying the better of the second half, that was how things stayed until up popped Kyle Bekker to head the Hamilton side in front in the 71st minute. Then came the fixture’s trademark controversial moment and late drama.

Three minutes into stoppage time, with the game looking won, referee Yusri Rudolf adjudged Dominic Samuel to have blocked a shot in the box with his arm, pointed to the spot, Nathan Mavila buried the penalty, and the spoils were shared.

Nathan Mavila tucks home from the spot to bring us all square after a late hand-ball in the box.

Was it a penalty? Depends which side you ask.

“From where I saw it, the lad’s brought his arm up and it looked like from the direct line I had I thought it was a blatant penalty,” Cavalry coach Tommy Wheeldon Jr told reporters after the match.

But Forge coach Bobby Smyrniotis didn’t quite see it that way.

“It’s not a penalty, it’s as simple as that,” he said in his postgame press conference. “I would probably say that 100 times out of a 100. But at the end of the day the call was made.”

Behind the scenes, I’m sure the CPL bigwigs were rubbing their collective hands in glee.

The two class acts of last season may not admit that they hate each other, but at the very least there’s a simmering dislike.

Last year’s matches were all close affairs. There was just one draw in their nine meetings in league and cup action. The other eight games were all settled by a single goal, with Forge winning five of them and the two most important ones – the two-legged 2019 CPL Championship game.

The matches have also been pretty intense affairs, with the tough tackles flying in. The ten meetings have produced 44 yellow cards and four red, including two in the first leg of the Championship game, with arguably scope for a lot more.

So just what is it about these two teams that keeps throwing up the drama and controversies?

“I don’t know [what it is] but I think there’s definitely something out there where we just seem to bring late drama and last minute [goals],” Wheeldon told us after the match. “Just look at the finals even. They score at the end of the first half and score in stoppage time when there could have been a penalty.

“It’s just two competitive teams that are making things happen. So these types of things happen. Not one of us have gone out ahead and battered the other one by a scoreline. There’s always been just one goal in it. It is what it is.” 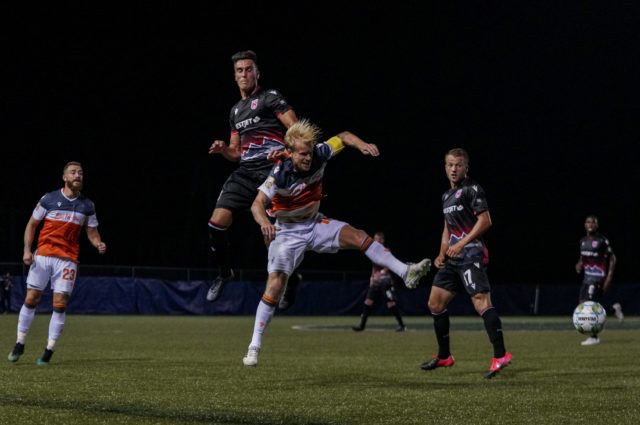 Games between bitter rivals tend to throw up their fair share of drama, and the more the teams play, and the more these things happen, then the passion just intensifies, even if some of the drama isn’t always of the teams’ making.

“We’ve eight teams here in the same boat but we’re obviously two teams that did very well in 2019. Kicking off the season, kicking off what’s 2020 here at the Island Games, I think it was always going to be a very good and a very well contested match.”

It’s easy to see the intensity between Cavalry and Forge from just watching on TV. But what’s it like to actually play in these matches?

“Oh they’re unbelievable,” goalscorer Zator enthused. “These are the game that you want to play. They’re the big games, they’re the rivalry games. The two powerhouses knocking heads and this is what happens. It’s scrappy, it’s exciting, everybody gets after each other, there’s goals, there’s blocked shots and everything, cards. It’s an exciting game and it’s very fun to be part of.”

And that’s a view echoed by another goalscorer from Thursday night, Forge’s Anthony Novak.

“These two teams last season set the standard for what it meant to compete,” Novak believes. “Obviously both teams have a different brand of football. Both teams play their own way and they both play very well. I don’t want to call it a rivalry to be honest. We take each game as they arrive.

“Playing in those kind of games, for me personally, it’s always fun. I think I’m two for four against them, or something like that, so if I can keep that up I don’t think I’ll be too disappointed.”

As neutrals, all we can hope for is more of the same.

Forge can’t help but feel deflated in giving up another stoppage time goal to their rivals, but for Cavalry, grabbing a point at the death like that will do wonders for the team mentally for the rest of this tournament.

“It’s massive, massive,” Wheeldon feels. “In a tournament setting, to play as well as we did in the first half, be pegged back, and find a way to get a result, that’s a massive big boost. Because even the lads came off afterwards and said, you know what, we could have been a bit better the second half or we could have done that.

“They’re very self reflective. They’re an honest group of lads that love to compete and love to play for points, so that gives them a great boost going into the next part.”

Advantage Cavalry? I’m not sure anyone can say that with any certainty in this fixture.