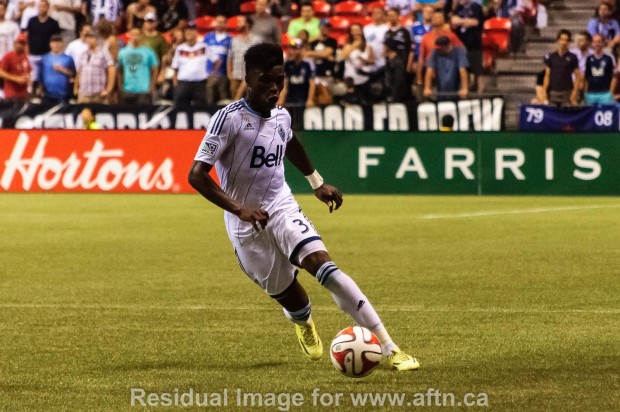 Last Saturday, on a cold afternoon in Chicago, Vancouver Whitecaps showed the Chicago Fire supporters a glimpse of the future. They showed the viewing audience on television, who maybe haven’t watched the team play before, a young, fast and athletically gifted left-back who has a bright future with not only the MLS Whitecaps but looks likely to be a regular fixture on the Canadian men’s national team for the next decade.

Sam Adekugbe has been in the Vancouver residency system since September 2011. Time and time again he has excelled at the U16 and U18 levels and after he signed his MLS homegrown contract, he has stepped up to the next level, knowing that the road to becoming a full time MLS starter will be full of obstacles and challenges. In the long run they will only make him a more well rounded and more complete professional footballer because of it.

Last weekend during the game versus the Fire there were signs that he has plenty to work on to become the most complete left-back he can be. He isn’t always in the perfect defensive position, he can maybe be too aggressive from time to time, but what he lacks in his technicalities he makes up for it with his raw speed, pace and his gifted abilities.

Numerous times he showed off that unsuspecting speed to blow past countless Fire players and run right around them down the left side of the pitch. He showed great footballing smarts by jumping into the play when he was open to do so. Now the pass wasn’t always sent to him by his teammate, and there were a few wasted 50 to 60 yard runs, but at least he knew when he had an opportunity to make them. He also knew once he didn’t get the ball to hustle back and get into sound defensive positions just in case there was a quick turnover and a counter attack. Just as well, as watching the game there was plenty of them by both teams.

Moving forward, Carl Robinson has a difficult decision to make now every game. Does he go with the football intelligent, experienced and great team leader that is Jordan Harvey or is the future now and should he start the uptempo and faster Adekugbe?

As of now, there appears to be no limit on Adekugbe’s potential as a player. What to do with him and how to get the best continued development out of him are now the questions facing the Whitecaps management.

USL and the new WFC2 team are still an option for Adekugbe this season. That would be a great chance for him to get quality, competitive minutes on a pitch. But there is the potential of him not benefiting enough from the quality of play in USL.

Adekugbe has shown he is capable of holding his own and excelling at the MLS level. Sure he will learn from his mistakes at either level, but it might be better for his continued footballing development to make the mistakes around players like Mauro Roslaes, Pa-Madou Kah and Steven Beitashour than players like Brett Levis, Tyler Rosenlund and Jackson Farmer.

And I mean that as no slight or with no offence to the USL players I named, but they don’t have years and years of experience at the highest level of football in North America, and in Rosales’ case in South America.

Another option thrown around by Whitecaps supporters on Twitter these past few days caught my eye. Could we have Harvey start at right-back for the struggling Steven Beitashour, thus allowing Adekugbe to continue to start and gain quality MLS minutes and experience as the left-back?

Other than the assist to Octavio Rivero to set-up the game winning goal (which we have to give him kudos for), Beitashour has struggled this preseason and the two games so far in the regular season. Just like last season he has been beaten too many times by being sucked in too far into the middle of the pitch, then having the opposing team’s defender run right past him giving them an easy shot or too much space to make a decent cross into the defensive box.

Harvey has filled in nicely at the right-back position a few times over his career, he has the experience to be able to not look completely out of place on the pitch in that spot. Ethen Sampson is currently the first choice back-up to Beitashour, and although Tim Parker may also be an option there going forward, the cupboard is somewhat bare for the Whitecaps in that position, and not for the first time.

Adekugbe’s performance on Saturday earned him a place in Major League Soccer’s “Team of the Week”. That display, along with the ‘Caps keeping their first clean sheet of the new season, make him hard to now drop.

Tough decisions ahead for Robinson.