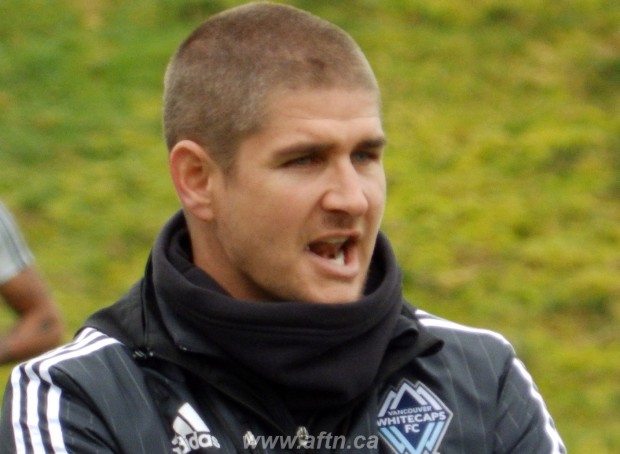 The Whitecaps wrapped up their final on-field training session in Vancouver on Thursday morning before heading down to Portland tomorrow for nine days to take part in the Rose City Invitational (we don’t do sponsors here at AFTN. Call it what it is!).

Vancouver have four preseason games already under their belts, and the ‘Caps will face another four down in Oregon.

The squad is in it’s usual buoyant mood as they get set to head down the I5 to face their Cascadian rivals, and tournament hosting, Portland Timbers on Sunday, Norwegian side Stabæk on Wednesday and finally Chicago Fire next Saturday. The younger ‘Caps players will also face off against their Timbers counterparts this coming Saturday in an additional closed doors game.

It’s been hard to read too much into the preseason action so far. Two wins, a draw and a defeat reads the record, with the nine goals for and two against slightly skewed by the lopsided 6-0 hammering of the UVIC Vikes at the weekend.

But with First Kick against Toronto (hopefully) just two weeks away, ‘Caps coach Carl Robinson is “very pleased” with where his squad is at.

“The group are very lively, they’ve very competitive,” Robinson told reporters after training on Thursday. “They’re disagreeing on certain things, which is good, but they’re talking and when you have a young group of players it’s important that they communicate with each other respectfully.

“We’re coming along slowly, but nicely. If we can add one or two more into the picture then that will help us as well.”

So just how close or how far away are the Whitecaps from where he wants them to be right now?

“I’m probably never where I want to be, in relation to the group and how good we can be,” Robinson told us. “I don’t think any football manager, unless he wins the Champions League, will ever say he will be.

“Are we in a much better place this year than we were last year? 100%. Without a doubt. We’re more organised, we’re more planned. Most of the group have come back this year as well. We’ve added key additions, which is always important, but we’ve kept the core group together.

“So we’re not far away. Will we be up to speed come the first game of the season? No, we won’t be 100% fit but we weren’t last year and we managed to get off to a good start, so we are working towards that. When we will reach peak fitness, I don’t know. Will there be more additions, yes, there certainly will. When? I don’t know, but we’re always a work in progress.”

The Whitecaps featured four trialists down for their first preseason trip of the year down in Tucson a couple of weeks ago. Although there will be some new faces down in Oregon as well, it’s not likely to be ones in the first team reckoning.

“There’s a couple of guys coming in, basically to have a look at them for the USL team, so we’ll add a few numbers there,” Robinson said. “There’s no-one really on trial at the moment that I’m looking at for the first team because the guys I maybe have on our radar, you won’t be able to get on trial.”

No-one apart from Robert Earnshaw that is.

The Welshman is the only Tucson trialist to have stuck around. As he told us last week, he’d love to call Vancouver his new home and impart some of his knowledge onto a young Whitecaps’ strikeforce, but as with many things in MLS when it comes to contracts, things are not just that easy.

“There’s been communication between me and Earnie every day,” Robinson is happy to admit. “There’s a number of factors that come in to that. There’s what’s our priority position and I think you know we’ve got another priority position first, which will depend on how much money we leave open for another spot, but also the CBA.

“We don’t know what’s going to happen there with the cap and things like that, so we’ll just keep it open-minded about that, but the communication happens every day. Until we need to make a decision, or he needs to make a decision, then we’ll keep it moving forward.”

The priority position that Robinson talks about is that of the left wing. The Whitecaps have no real natural left winger. Sure they have a number of players than can play there, like Nicolas Mezquida, Kekuta Manneh, Erik Hurtado and Darren Mattocks, but that role is not a natural one, or a preferred one, for any of those guys.

Although he won’t come right out and say it, you can tell that Robinson would love to have the chance to keep an experienced player, and a proven goalscorer, like Earnshaw around if he can make it happen within the salary cap.

To fill the left wing role with the calibre of player that Robinson wants will take money. To do that and keep Earnshaw around, will take some creative accounting and the likelihood of moving one, maybe even two, of the higher earners on.

Standing in the way right now of any of that happening is of course the current Collective Bargaining Agreement (CBA) talks between the league and the players. Both parties still seem far apart, but until the new CBA is signed, sealed and delivered, the Whitecaps, and every other team in the league, simply don’t know what they’re dealing with financewise and rosterwise for the current season.

How much can they spend? Will there be an additional DP spot? What other weird rules will come into play that we’ll only hear about when Seattle, LA or Toronto add a new player?

With all this in mind, how much does the CBA wrangling and the uncertainty of what may lie ahead mess with Robinson’s plans for strengthening the current squad?

“It doesn’t upset me too much because I always prepare for the worst case scenario,” Robinson told us. “What I won’t do, is I won’t put the club at risk for next year and the year after because there’s no need to do that.

“If you’re building, which we are, it’s important that you pre-prepare everything and I’ve got plans for six months, 12 months, 18 months, 24 months ahead. If I think it’s right for the club to bring in a player then I certainly will do it. If it means me being over the salary cap but I think it’s the right thing to do, then I’ll certainly do it and I’ll try and make adjustments other than that with it.

“So it doesn’t affect me really. It won’t change my focus. I know it probably changes the player’s focus, because they’re trying to agree it now, but hopefully everything will get agreed and we’ll move forward happy.”

The Whitecaps added some big names in Matias Laba and Pedro Morales to their MLS roster down in Portland last year. Unless the CBA talks get wrapped up pretty darn quick, then that’s looking less likely this year.

Vancouver won the Portland tournament last year and will be looking for more of the same this time around, but as fiercely contested as the three games will be, Robinson is most concerned with the performances of his players as the week goes on rather than the wins, although beating your Cascadian rivals is always nice.

“I think even a Portland staff game might have some feeling in it, if I’m being honest!” he joked. “It’s a pre-season game, it’s a rivalry game, so results don’t really matter but performances do. My players are fighting to get into the team, so I don’t think there’s ever a friendly game against Portland.”

As mentioned, there will also be an additional bonus game with the Whitecaps younger players taking on their Timbers counterparts on Saturday evening at 7pm in a closed doors match. The game will give them another chance to show Robinson that they are knocking on the door for MLS minutes.

“I think it’ll be good, but the only tricky thing of it is that the game is on Saturday, which is the day before the first team game. Ideally we would have liked it the day after, so that the guys that didn’t play [could play]. So we’re going to have to plan it properly.

“So I will plan it so that we have four games in a week, which is important for all the squad, so they’ll get plenty of minutes.”

Vancouver kick off this year’s tournament against the hosts. Last year they wrapped up their against Portland. By that game Robinson had pretty much nailed down his starting eleven for the next week’s MLS kick off against New York.

Chicago are last up for the ‘Caps this year, so will Robinson be hoping to have his first choice starters take the field in that game this time around as well?

“As I keep stressing to the group, because people keep trying to find out who my starting right back’s going to be, my starting left back, I can give you and idea but what happens if he gets to the day before the first game injured?

“I want to keep the competition fair, and it is fair, but I also want to keep the group hungry. If you’re in the starting team against Chicago, which is one week before the start of the season, then you can read into it all you want, but if you train poorly all week and you get injured on the last day then you certainly won’t be starting. They’re jockeying for places.”