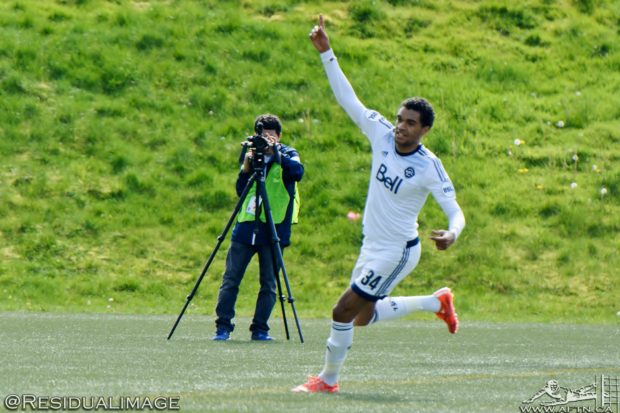 Caleb Clarke is back playing football in Vancouver, and back doing what he does best, scoring goals.

It’s been three years since Clarke departed from Vancouver Whitecaps, the club he had been a part of since 2009. After lighting it up in the Residency, Clarke earned himself his first professional deal with the ‘Caps in April 2012, signing a Homegrown contract and joining the MLS roster.

But it wasn’t the greatest experience for Clarke. Playing time was limited and his place in the pecking order was well down the depth chart. His final season with the U18s had seen him score 24 goals in 27 appearances, as the Whitecaps made the USSDA championship game in the summer of 2012. Everyone wondered how he would perform in MLS, but we never really got the chance to find out.

He did make two substitute appearances in his inaugural season, making his MLS debut as a sub against FC Dallas in August 2012, but he needed playing time at the next level to continue his development. Matches in the PDL with the U23s and in the MLS Reserve League were great for sharpness, but it wasn’t really raising his game to where it needed to be to challenge for a first team place.

After a couple of training stints in Germany, one of the clubs, FC Augsburg, liked what they say of Clarke and took him on a year’s loan in July 2013, where he scored eight goals in 26 appearances. A permanent move loomed but a training injury saw Clarke forced to return to Vancouver to undergo surgery to repair a ruptured quadriceps muscle at the end of May the following year.

It was a tough blow for the young striker, and one which derailed his Whitecaps career. When he was back from injury, despite signing a new deal and the ‘Caps being under new management, Clarke found himself on the outside looking in once again in the first team, spending all his playing time with WFC2 for their inaugural USL season in 2015, where he scored seven goals in 25 appearances, including the team’s first ever home goal. 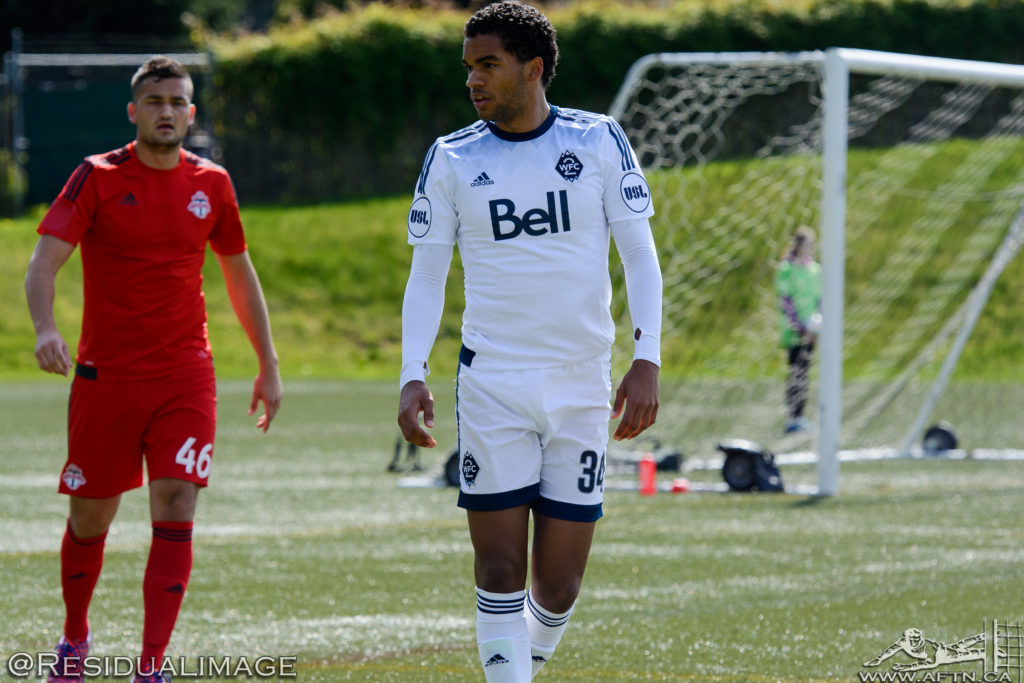 Clarke realised his best career path lay elsewhere and he parted ways with the Whitecaps that offseason, joining German side SpVgg Unterhaching on a free transfer, then moving on to FC Amberg the following season.

Clarke was released by Amberg after their relegation last summer and made the decision to head back home, landing with CCB LFC United for the 2017/18 VMSL season as he weighed up all of this options. Deliberations over, Clarke decided to get himself a college education, and the 25-year-old set the ball rolling to secure at place up at UBC.

“I’ve been in Europe for a while,” Clarke told AFTN. “It was always on my mind as a back up plan to come to UBC because I know the level’s high here. Things weren’t working out in Europe so my first choice was definitely to come here. I saw the players were good and I was interested, so I got the ball rolling on that.”

Clarke is just one of a number of impressive additions to Mike Mosher’s Thunderbirds squad this season as they get ready to host this year’s U Sports nationals in their quest for a record 14th national title. There’s 15 new faces a UBC this year, and among them are two very familiar to Clarke from his Whitecaps days – Thomas Gardner and Mitch Piraux.

As he returns to his old WFC2 stomping ground of Thunderbird Stadium, Clarke is looking forward to getting back into the swing of things, although he admits it’s going to be interesting having to juggle school and playing football again.

UBC started the season with a 1-1 draw at the University of Fraser Valley Cascades a week ago, before clinically dismantling Trinity Western University Spartans 3-0 on Sunday afternoon. Clarke looked inspired in that match, contributing a goal and two assists, as the new look Thunderbirds showed it may not take the team as long to find their chemistry as even Mosher expected.

“It was really good [against TWU],” Clarke said. “There’s been a lot of players coming in and out in the preseason. Now that we’ve kind of got a focus on maybe a starting eleven, we can start to get cohesive.”

For those that have followed Clarke’s progress over the years, you’ll see a different looking player out there with UBC. More mature, more of a footballing head on his shoulders, but still with the same goalscorer’s instinct, and the Richmond native puts that down to one simple thing.

“In Germany, I played a lot,” Clarke revealed. “That was the big difference. I got a lot of games, a lot of experience in. It’s just something I wasn’t getting at the Whitecaps. I think that helped a lot.

“Germany was really good for me. It taught me a lot of things about my body and stuff like that, and how to play. I think I’ve developed my identity and I’m pretty comfortable with the way I play now.” 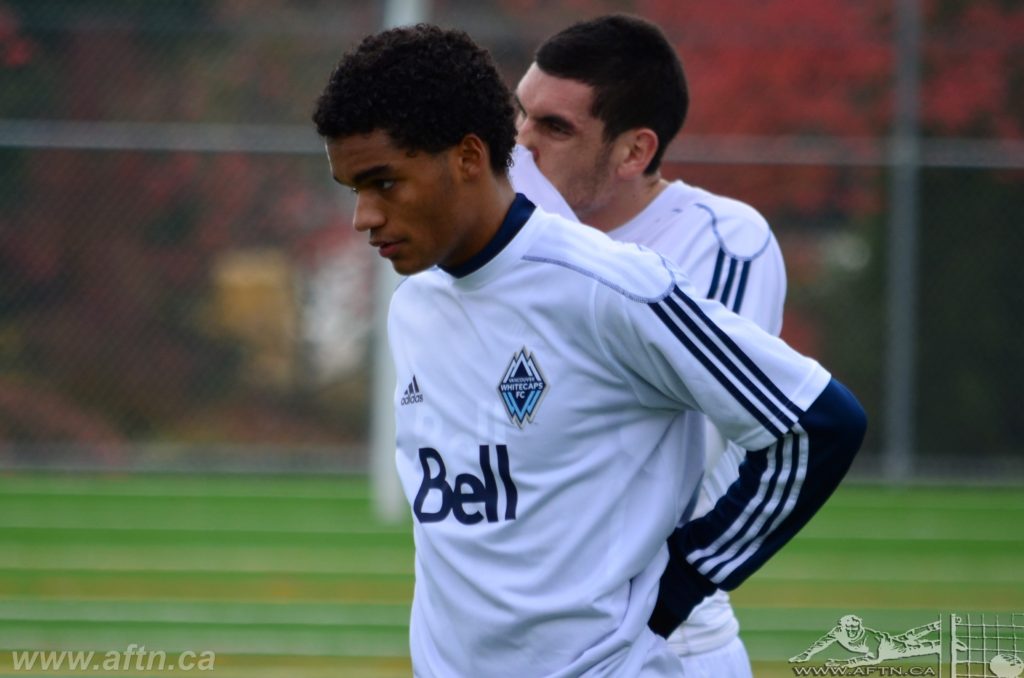 Clarke’s reputation will undoubtedly precede him amongst the rest of Canada West. As a former Canadian national team player and Vancouver Whitecap, he’ll be a player heavily marked. He’ll also be one under a lot of scrutiny, with greater expectations for what he will produce at this level.

He’s just taking it all in his stride, knowing the added pressure is there, but happy to deal with it.

“[I feel it ] a little bit, but I think I have more experience now,” Clarke admitted. “I’m a bit used to it. I kind of welcome that pressure and hopefully I can take that on for myself and hopefully they can play freely. I don’t mind being in the spotlight a bit, so it’s all good.”

For UBC, the more attention opponents focus on Clarke, the more space and time their other attacking pieces like Victory Shumbusho, Zach Verhoeven, and Sean Einarsson will find themselves getting.

But even with all the attention, Clarke has had an outstanding start to the Canada West season, with two goals and two assists from the Thunderbirds’ first two matches. And he nearly had a third goal, but missed a penalty in UBC’s season opener at Fraser Valley Cascades last Friday.

He’s already found his feet, struck up some great chemistry with Verhoeven and Einarsson, and will be a potent threat to UBC all season long.

“It’s been a great start,” Clarke enthused. “I hope to continue it and just stay consistent all the way to the Nationals. Just keep that high level and do what I can for the team.”

UBC host the U Sports Men’s Soccer National Championships in November for the first time since 2007. The won it that year, one of their record-breaking 13 national titles, but they’re looking for their first once since 2013.

Clarke knows that this year’s nationals will see all the players that take part putting themselves in the shop window with the Canadian Premier League, and the rumoured college draft, just around the corner. And all of that played a role in helping the striker decide to come to UBC this season.

“Definitely,” Clarke agrees. “There’s a lot [to think about]. CPL is coming up, and the Nationals. That was another big thing as a reason why I came. I like to win and winning a national title is something that doesn’t come often, especially at home at UBC. So that’s the goal this year, to win that.”

There’s certainly a lot for Clarke to weigh up about what the future may hold in store for him. He’s currently enrolled in Arts but is considering a switch to Business next year if he decides to stay in college. He speaks German and French, so international business in particular interests him.

As things currently stand he only has one year of college eligibility to play for the Thunderbirds and is listed as a Senior. There may be a possibility he has two, and that is something that UBC officials are currently looking into, as they try and navigate all the collegiate red tape that seems to surround players.

“It’s a really interesting time,” Clarke told us. “There’s a lot of possibilities. I can stay here, I can do studies. At this age I never thought I’d be back at school! So there’s that, CPL coming up, MLS could be a possibility, back to Europe. There’s so many things, I’m just going to take it a day at a time and after Nationals, we’ll see what happens. If school’s it or I go back professional, we’ll just see what happens.” 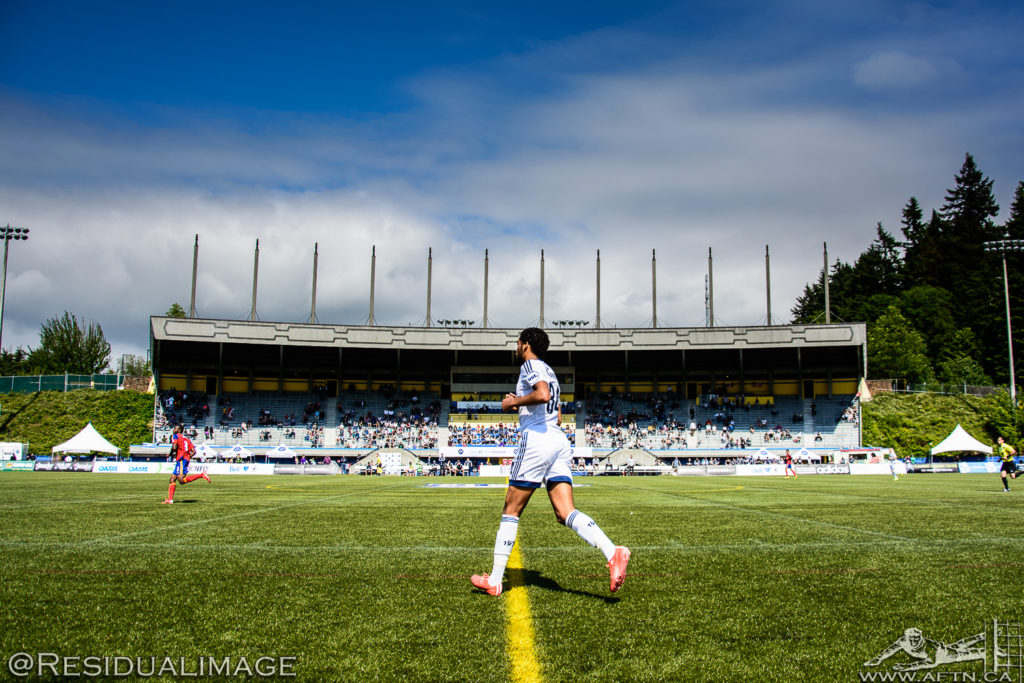 You can get out and see Clarke in action this weekend as UBC Thunderbirds continue their Canada West campaign with a pair of home games, facing last year’s U Sports bronze medallists Thompson Rivers University Wolfpack on Friday, and then UBC Okanagan Heat on Saturday night. Both games kick off at 6.30pm.

Caleb Clarke back refreshed, hungry and looking to be a goalscoring threat for the Whitecaps