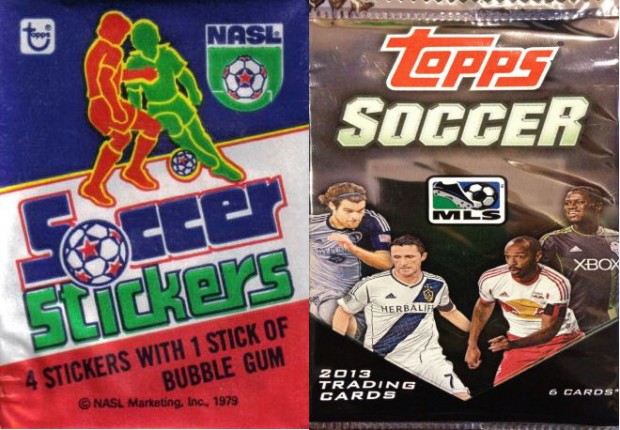 Major League Soccer made a licencing announcement in May that will have been missed by many, but will have been of great interest to my fellow football memorabilia collectors.

Topps were awarded the exclusive MLS license is for trading cards, player stickers, sticker albums and other collectibles, with immediate effect.

For fans of a certain age, it will take them back to the Topps cards that were produced during the NASL era of North American football and their popular sets produced in the UK.

The new MLS deal saw Topps take over from Upper Deck who had previously produced the player collector card sets, including ones for Vancouver Whitecaps in their first two years in Major League Soccer.

Topps were founded in 1938, manufacturing chewing gum and bubblegum. In a bid to boost sales after the Second World War, Topps packaged their gum with trading cards, with the first sports ones being a baseball series of cards in 1952.

The company continued to go from strength to strength and are one of the most widely known companies in that particular field of sports memorabilia worldwide.

They’ve produced a number of football cards and stickers over the years and have the official licence from the English Premiership to produce sticker albums and trading card sets.

For those of us of a certain age, the Topps cards from the 1970s are their iconic design and there is a retro nod to the design of their English league set from 1978 in the new 2013 set, but more on that later. 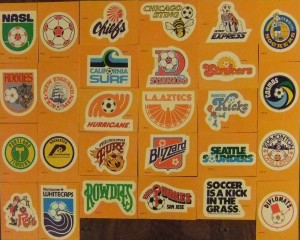 But Topps weren’t just producing football cards over in the UK at that time, they also brought them out over here, including an iconic set for the North American Soccer League in 1979, which old time collectors here may remember.

The 33 card set featured sticker cards of all 24 NASL clubs, along with one of the NASL logo, an NASL soccer ball and a “soccer is a kick in the grass” sticker card. The other six were just strange mish mashes of four team names on a card.

The sticker cards came in packs of four and were wrapped in wax paper along with a stick of bubblegum. Each pack cost a whopping 15 cents. Changed days indeed.

Once you’d peeled your stickers off (if you wanted to put them on an accompanying wallchart) there was still some fun to be had.

The backs of 21 of the stickers made up two picture puzzles that you could put together. Three of the other cards showed you what the pictures should look like and the remaining nine were instructional “how to” play soccer cards.

‘Puzzle A’ was made up of 12 cards. When that one was put together it made up two photos of NASL action.

‘Puzzle B’ was smaller and made up of nine cards. When that one was put together it made up a picture of Werner Roth of the New York Cosmos holding up the NASL trophy. 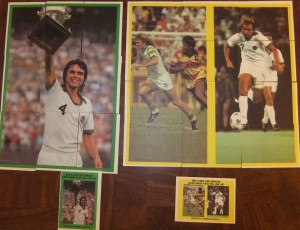 The cards were really cut in a higgledy-piggledy manner, but still a fun thing for kids and the young at heart of the time.

They haven’t really gained any real collectors’ value over the years, meaning you can still pick them up fairly cheaply.

Happy memories there for some I’m sure and now we move forward 34 years.

A general feeling is that Topps really missed the boat on what they could have done with their NASL sets. Let’s hope they don’t repeat that mistake with their new MLS ones.

The cards come to buy in individual packs of six, value boxes of eight packs and hobby boxes containing 24 packs. The hobby boxes guarantee to have at least one of the special autograph or relic cards, which we’ll tell you more about later.

Collectors have a lot to acquire and completests will have large credit card bills, with some of the cards considerably scarce.

Altogether there are 12 different sets/inserts along with the base set, which itself comes with a number of variations/inserts. 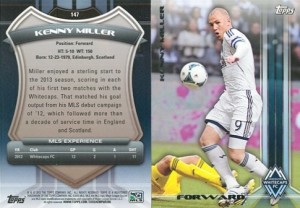 For most collectors that’s all they will want and they’re the easiest to come by.

The base set also comes in “parallel cards”, which are basically the same card but with some different colouring in the background. These come in blue, gold and black variations and from what we can gather, all ten Caps are available in these.

Seems completely pointless and just another way to make people spend money but they have been around for decades so there’s obviously some demand from the keenest collectors out there.

There is also a scarce “Base Variations Set” of 20 cards which features an alternative photo of players like Thierry Henry and Robbie Keane, but no Whitecaps. You’ll only find one of these cards in every 349 packs.

As alluded to above, the other big set to collect this year is their retro nod to the English cards issued in the late 70’s.

The “1978 English Footballer Set” contains 60 cards, all done in the classic 70’s style and although they will probably look a little weird to some, for those of us what were kids around that time, the memories come flooding back. 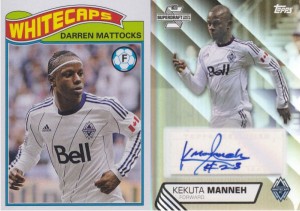 There are only two Whitecaps cards in the set: Darren Mattocks and Jay DeMerit.

There is also an 18 card “1978 English Footballer Autographs Set”, serial numbered /25, but unfortunately there are no Caps featured in that set.

Whitecaps do feature however in two of Topps’ other new autographs sets.

The biggest disappointment for me is that the Whitecaps do not feature at all in the 10 card “MLS Rivalries Set”. Ten cards, 19 teams, you’d think we’d get in there somewhere but nope. Neither do Columbus Crew. Seattle, New York and DC all feature twice though. After having no game in rivalry week, I think MLS are trying to tell us something.

If you’re an absolute completest, you can also keep an eye out for the rare one card “Official MLS Soccer Ball Redemption Set”.

Whether you’re a new collector or one that’s been collecting such things for years, that’s a lot for you to start looking into, modern and vintage.

You can find the modern day Topps cards in memorabilia and hobby stores or online at the Topps website and card stores, although I dread to think what the postage will be to Canada.

Ebay is usually my main shopping spot for such things and you’ll be able to pick up both the 2013 Topps sets and the 1979 old NASL one on there.

Go on. You know you want to. Just don’t eat any of the bubblegum that comes with the 70’s packs.