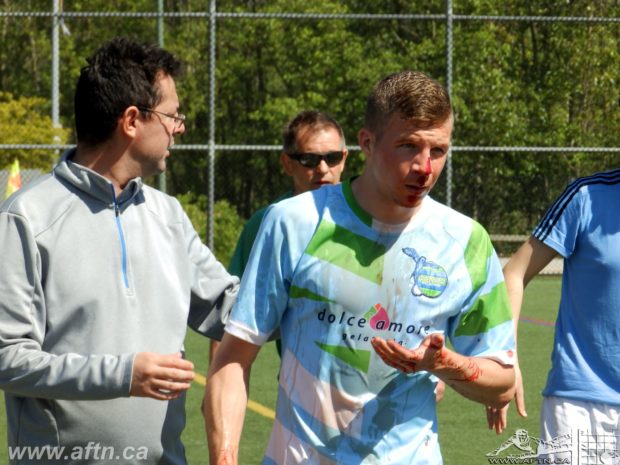 The BC Soccer Provincial Cups will reach their climax on Saturday with the A, B, U21 and Masters finals taking place at Westhills Stadium in Langford, Victoria.

Vancouver Metro Soccer League (VMSL) sides were once again in dominant form in last weekend’s Provincial Cup semi-final match ups. The league will provide all eight finalists in the four men’s competitions, with the A and B Cup throwing up two dream finals. 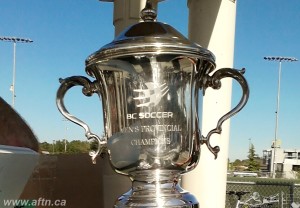 The showcase A Cup final will be between Coquitlam Metro-Ford Wolves and Pegasus FC, the top two sides in the VMSL Premier this year. Just a single point, and one goal, separated them in the standings come the end of the season and it should be a fantastic clash on Saturday, with a place at October’s Nationals at stake.

Coquitlam Metro-Ford are looking for the treble after their VMSL league and Imperial Cup titles, but they were made to work hard for their spot in the final by 2014 Provincial A Cup winners Croatia SC at Trillium Park on Saturday.

Vito Iacobellis gave the Wolves an 11th minute lead and when Sang Hwang made it two in the 63rd minute, the VMSL champs looked home and dry. Croatia made it an interesting ending with a stoppage time goal from Ramsey Alfantazi, but there was little time to push for an equaliser to take the game to extra time, and Metro-Ford’s treble dream remained intact.

You can see Bill Currie’s photos from the game over on BCsoccerweb.com.

Pegasus were also made to work hard for their final appearance, eventually overcoming their Surrey rivals Pacific United 1-0 at Newton Athletic Park on Saturday evening. Javid Khan’s 58th minute goal was the difference between the two teams.

Saturday’s A Cup final will kick off at 3.30pm, it Coquitlam Metro-Ford looking for their first Provincial title since 1999, while Pegasus are hoping to repeat their triumphs from 2004 and 2011.

Kicking off the Final Day festivities will be the Keith Millar (B) Cup final between Rino’s Fury and Campo Atletico.

There’s no love lost between the two teams (check out the TakeThePiss.com forums), so that gives the game a nice little bit of extra needle.

Not that it needs any.

Rino’s won the VMSL Division 2B title this season, earning promotion to Division 1 for next year. They lost just two games along the way. Campo also only lost twice, but unfortunately for them the second of those defeats came to NV Viking Storm in their final match of the season. The 2-1 loss cost them the Division 2A championship and promotion, finishing one point behind GN Sporting Club.

Campo dusted themselves down and have been on a tear in the Provincials, despite struggling with squad numbers due to injury. They continued their excellent Cup form on Saturday afternoon, getting past BMSA Rudolph Cup winners Impero Calcio 3-1 at Burnaby Lake. 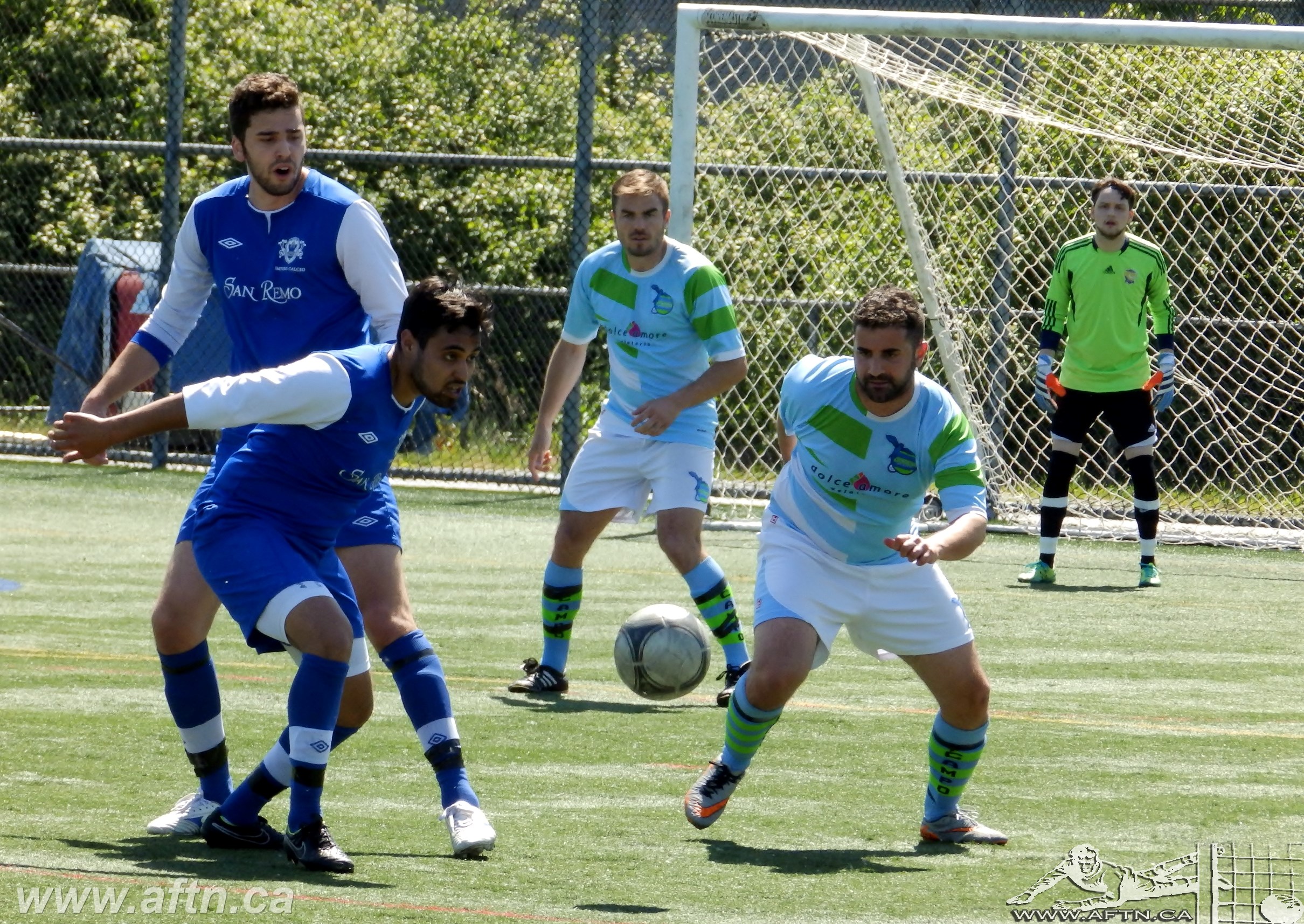 Campo dominated the first half and could easily have gone in more than the two goals that they did.

They opened the scoring 10 minutes in and was almost identical to the goal that gave them the lead against AC Richmond in their quarter-final. Pablo Mora Angel latched on to a long ball forward, shook off the defender and slotted clinically past the Impero keeper into the bottom left corner.

They nearly doubled their lead three minutes later when Edson Castro rose unchallenged to meet a corner but crashed his header off the bar. Two minutes after that they hit the woodwork again, this time through a Santiago Sanchez shot on a breakaway that also crashed off the bar.

Campo’s second came two minutes into first half stoppage time and it was a great solo goal by Santiago Sanchez. The striker collected the ball to the left of the box, cut inside past the defender, took a couple of touch to make room for the shot and drilled the ball into the bottom right corner.

Impero hadn’t really had any clear cut chances but they came out for the second half fired up and keen to get back into the game blasting a good chance over five minutes in.

Campo were happy to sit back and soak up the pressure, using their pace to hit on the break. Sanchez, Carlos Davis Flores and Giancarlo Cusano had chances to kill the game off, but couldn’t take advantage and Impero Calcio got themselves back into the tie in the 68th minute when Lucas Sweda fired home from a tight angle.

Angel brought a great save out of the Impero keeper on another quick breakaway as the Burnaby side pushed for the equaliser. They created a number of chances but couldn’t find a way through a resolute Campo defence.

As the game ticked into stoppage time, Impero still had hope of forcing extra time but that was ended when Castro dispossessed a defender 30 yards out and raced in on goal to tuck away the third.

It was a deserved win for Campo Atletico, who now look to repeat the success of the club in 2012 when they won the B Cup under their previous guise of NVFC Campobasso. Impero Calcio can be proud of their cup run as well, putting in a couple of great performances to score some upset wins.

You can see the first three goals from the game, and some of the other chances from the match, in our video below:

You can also see some photos from the game HERE or in the Flickr slideshow below:

The second B Cup semi-final took place at Burnaby Lake on Sunday. It was a battle of champions with BMSA champs Mundiavocat playing host to VMSL Division 2B winners Rino’s Fury.

You could tell from the early going that it was a match up between two fairly evenly matched teams, but it was Rino’s who were creating the more dangerous chances.

The Fury had a penalty shout in the 11th minute when Kyle Reed went down in the box but referee Peter Paquette waved away the appeals.

Reed then shot over from a good position eight minutes later, before Brooks Van Stavel squandered the best opportunity of the match so far in the 32nd minute, firing wide when in on goal with just the keeper to beat.

Mundiavocat keeper Brent Loewen produced a fantastic one handed stop to turn a Shawn Wilhelm free kick over the bar with eight minutes of the half remaining.

Although both teams were enjoying possession, all the goalmouth action was coming from the VMSL side and Paul Kook came within inches of giving Rino’s the half time lead curling his 42nd minute shot just wide of the left post, after some nice work by Yuya Nakano to set up the chance. 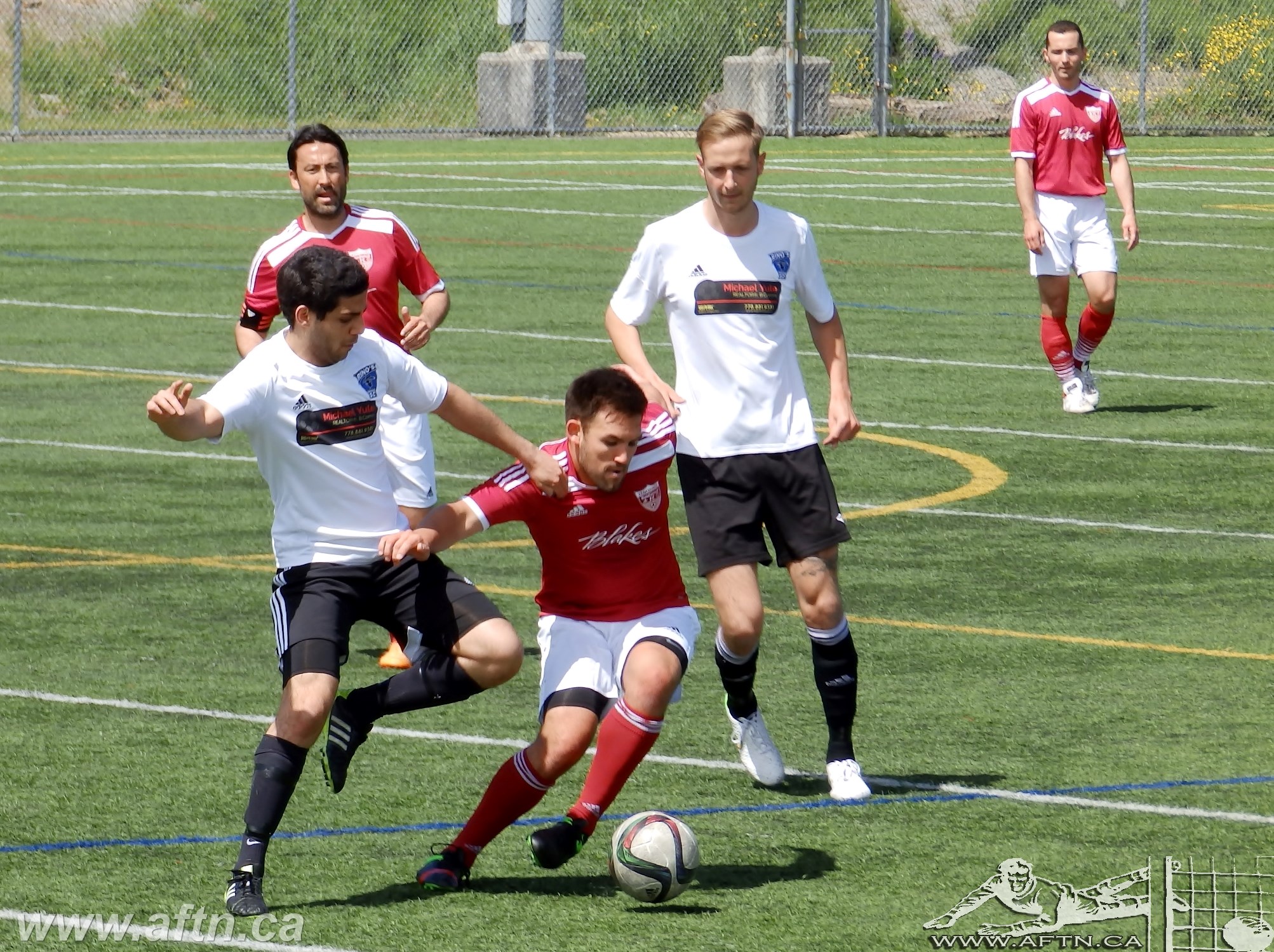 The Fury came closest yet to opening the scoring seven minutes into the second half when Benjamin Cougny’s downward header from three yards out crashed off the bar and the danger was cleared.

Three minutes later and Rino’s keeper Uluc Birol did well to come out and thwart a quick breakaway from Michael Buchan, as he bore down on goal.

It hard to say if it was the defining factor the way Rino’s were playing and with the chances they were creating, but a definite turning point in the match came in the 59th minute when Mundiavocat’s Hamish Rhodes was sent off for a high foot into the throat of Kook. It was clearly accidental, but deemed dangerous play nonetheless.

Nakano thought he’d given Rino’s the lead six minutes later, heading home a Cougny cross, but it was ruled out for offside.

Ten minutes later and Nakano and Koju Kojwang some managed to conspire to but the ball over the bar from three yards out after a dangerous low ball into the box, and when Reed saw his shot on the turn deflected just past the left post in the closing minutes, you started to get the feeling that this might not be the Fury’s day.

Mundiavocat were looking happy to knuckle down defensively and try and nick something on the counter, or at the very least take the game to penalties.

Rino’s started the first half of extra time in much the same vein, with Max Kaplan bringing out a leg save from Loewen five minutes in. But the breakthrough finally came three minutes later when Reed surged into the box and fired home.

It was an uphill struggle for Mundiavocat now, and they were dealt the killer blow in the 107th minute when Loewen got a hand on Kook’s looping shot from just inside the box, but couldn’t keep it out.

Rino’s added a third three minutes later, this time from the lively Cougny, who was played in on goal, getting the better of two defenders before firing into the net.

The Burnaby side nearly got a late consolation but Jean-Michel Frechette just couldn’t connect with a cross to the back post.

So 3-0 Rino’s Fury was the final score, setting up an all-VMSL Keith Millar Cup final. You can see all of the goals and a few other highlights in our video below:

You can also see some photos from the game HERE or in the Flickr slideshow below:

Congratulations to both teams, especially the Fury. Our four years of watching/cursing them in the competition has finally paid off!

It’s certainly shaping up to be a great battle in the final, with a definite bit of needle between the two sides heading in to it. Could be quite tasty. Saturday’s Keith Millar (B) Cup final will kick off at 10.30am.

The Masters final, for the Deryl Hughes Cup, will be between Metro Ford PCE and Croatia SC, kicking off at 1pm.

PCE became the second Metro-Ford team in the finals with a semi-final penalty win over UVic Alumni on the island on Saturday. The islanders went in to an early 2-0 lead before Metro-Ford fought back to take the game to extra time. With no other goals, Metro-Ford PCE advanced 8-7 on penalties. Croatia SC saw off FVSL side Coastal FC Peace Arch 2-0 in their semi-final.

The U21 final for the Doug Day Cup kicks off at noon and should be a hotly contested affair between VMSL U21 champs EDC Burnaby and VMSL U21 Cup winners Guildford FC.

EDC beat VISL champions Mid Isle Mariners 2-1 in their semi-final, with Guildford, who finished 5th in the league, beating FVSL U21 champs PMO Lordco Gunners by the same scoreline.

All the finals should be streamed online for those not able to make it to Victoria. Check the BC Soccer website later this week for full details.

Good luck to all the teams involved, but especially Rino’s! We’ll be at the Finals and will bring you full coverage on AFTN next week.