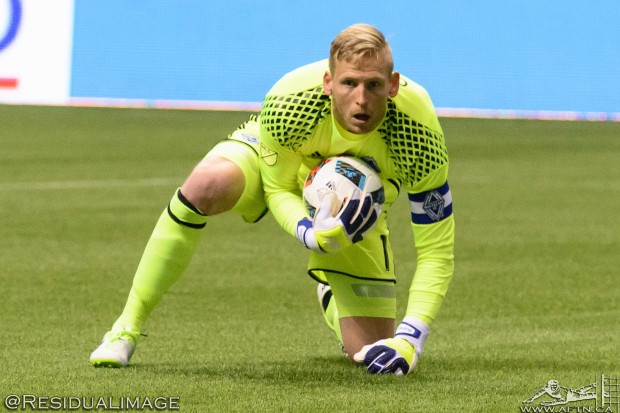 Well that was a gong show!!!

The ‘Caps never had a chance from the opening whistle. The offence was non-existent, the defenders seemed like they didn’t want to get physical and David Ousted was the only player that bothered to show he cared by his play on the field and his comments afterwards.

Now, it is not time to hit the panic button quite yet, but it is closer than maybe the players, coach and supporters want to admit to.

Lets take a look at The Good, The Bad & The Even Worse: United The Whitecaps Fall In DC Edition.

You know how bad the rest of the team was when the goalkeeper is the player of the game for the team and they still lose 4-0. If it wasn’t for the Great Dane it could have easily been seven or eight goals for DC United. With all the changes to the starting XI, the back four defenders were supposed to be the best part of the line up. No doubt about it, Ousted’s teammates hung him out to dry throughout the game.

Ousted plays with a chip on his shoulder, something that Marius Rovde likes about his game, but giving up four goals to DC United can’t be good for anyone’s confidence.

Last season the Whitecaps defence was a strong point for the team. They were the joint league-leading backline in MLS. Sure every team has the few games a year where nothing goes correct, but those games are usually against the stronger teams in the league.

Fraser Aird was horrible down the wing and got beat time and time again by Lamar Neagle. He had crosses whizz past his face so often that he might have wind burn from all of them. Kendall Waston and Tim Parker looked like they struggled in the middle of the pitch. You have to wonder how much not having Matias Laba in front of them played into this. Jordan Harvey, who has easily been the best defender this season, had a game to forget. Was always chasing and a step behind trying to clear crosses in the box.

Let’s hope they all forget this game quickly and can move on for the RSL game.

Other than hearing his name when they announced the starting line-up on TV, Kudo was invisible and not involved in this game. Re-watching the game (trust me it was painful), he never went into the physical areas in the box. He was stopped several times in his run by a physical defender or changed his running lane to avoid getting hit. To play an up top striker in this league you have to be willing to put your body on the line to make plays. So far Kudo has shown that he doesn’t that ability in his over-all game.

He will need to learn to get knocked down near the box to get his team some free kicks in great spots, get physical with a defender to open space for his teammates and to not back down from a defender or else they will not take him seriously on the pitch.