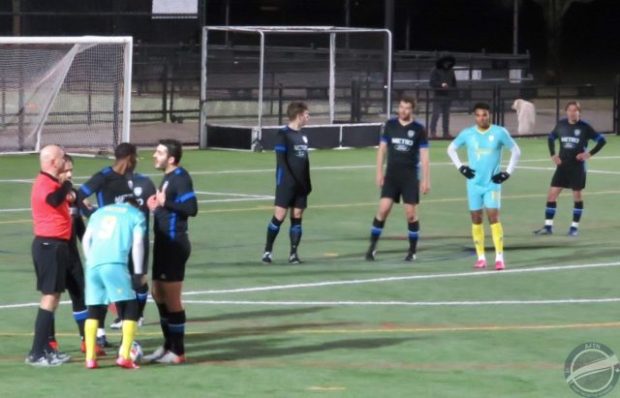 The battle for the 2021/22 Vancouver Metro Soccer League (VMSL) Premier Division title got a lot more interesting this past weekend with just four points now separating the top five teams after leaders BB5 United CCB fell to their first defeat of the season.

The Surrey side still have at least two games in hand over the chasing pack, but the season run-in should be fascinating to watch play out with a fierce battle for Provincial Cup spots brewing and Imperial Cup action getting set to get underway this weekend, where two berths can also be won.

BB5 headed to a chilly Cunnings Field on Friday night to take on a Coquitlam Metro Ford side who have been in up and down form these past few games. But the home side were too strong on the night in this one, running out worthy 3-1 winners after a strong all-round team performance that saw their defence in particular deal well with their opponents dangerous attack.

Both teams were moving the ball forward well in the early going and exchanged some half chances before the deadlock was eventually broken in the 23rd minute by the home side. It was both a goal from quick anticipation and a howler by the keeper as Andrew Metcalfe came racing out of his goal to try and cut off a through ball that Jovan Blagojevic was chasing down. The BB5 keeper completely mistimed his slide, allowing the former Whitecaps draft pick, who had just flown back from an Australian summer, to nick the ball away and saunter goalward to tap the ball home.

Coquitlam doubled their advantage with nine minutes of the half remaining when Ryan Ashlee fired home after a scramble in the BB5 box following a corner. That was how it stayed until just past the hour mark when Nic Morello was brought down in the box and Caleb Clarke fired home from the spot for his 16th of the season.

BB5 pushed to keep their unbeaten record intact but Metro Ford restored their two goal advantage 10 minutes later and it was Ashlee again who was in the right place at the right time to grab the clincher with a superb diving header.

That defeat still kept BB5 at the top of the table with a couple of games in hand, but it will certainly have given Metro Ford, who are four points off the top now in fourth place, and the rest of the chasing pack some hope that their march to the title might not yet be guaranteed.

Rino’s VSC Coastal remain nipping at their heels in second and now sit just two points behind, with an abandoned match with BB5 still to be played to a finish and tied at one apiece this coming Wednesday. Coastal headed to Newton Athletic Park on Friday night and came away with a 3-1 victory over SFC Pegasus. Sean Northcote set Coastal on their way in the 23rd minute, with Jake Starheim making it 2-0 nine minutes later. Northcote grabbed his second of the game just past the hour mark to put Coastal out of sight, with Jora Soran grabbing a 71st minute consolation for the Horsemen.

VUFC Hibernian sit a point behind Coastal in third after two first half goals gave them a 2-0 win over West Van FC at Thunderbird Stadium on Friday evening. Sebastian Dzikowski opened the scoring for the UBC boys in the 26th minute, with Chris Fisher adding a second six minutes later to secure three big points and they now meet Coastal this week.

Inter EDC continued their excellent recent form with a 3-0 win over BCT Rovers Hurricanes at Newton on Friday, with all the drama coming in an action packed final 13 minutes. Alex Marrello fired Inter ahead from the spot in the 77th minute after Massud Habibullah had been brought down in the box, with Nikolas Papakyriakopoulos doubling their lead two minutes later with a stunning long range free kick. Javid Khan saw red for the Hurricanes for a second yellow shortly after, before Habibullah grabbed a third for Inter in the 89th minute with a fantastic run and finish for his 8th of the season for the team.

🎥Another week, another wonder goal from Massud Habibullah for @clubinterfutbol. He's on 🔥 at the moment. This was his 8th of the season for Inter last night (9th in @vmslsoccer altogether). Surprised the Whitecaps let him go but surely a bright future ahead of him. What a goal! pic.twitter.com/c06yprcLNs

With the match between MAFC Elite and Croatia SC postponed, the final game of the weekend took place at Fen Burdett Stadium in North Vancouver on Saturday afternoon with a battle at the bottom between NVFC Norvan and Burnaby Selects White Eagles finishing goalless.

So after all of that action, here’s how the VMSL Premier standings look after Week 19 of the season: 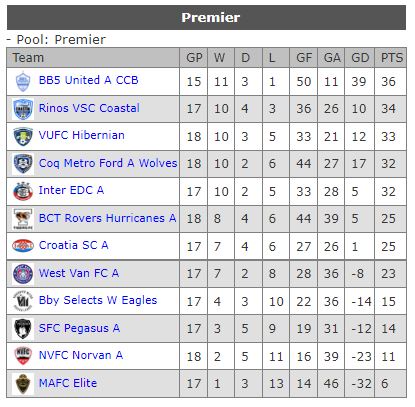 With the First Round of the Imperial Cup getting underway this weekend there’s a reduced league schedule, but here’s what’s on the slate in the VMSL Premier: 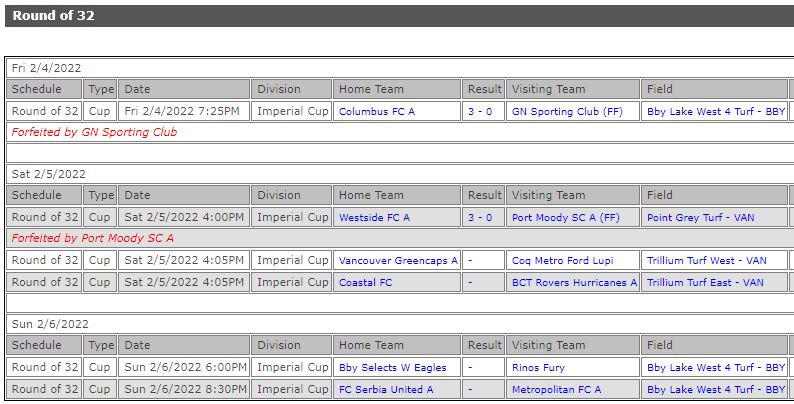