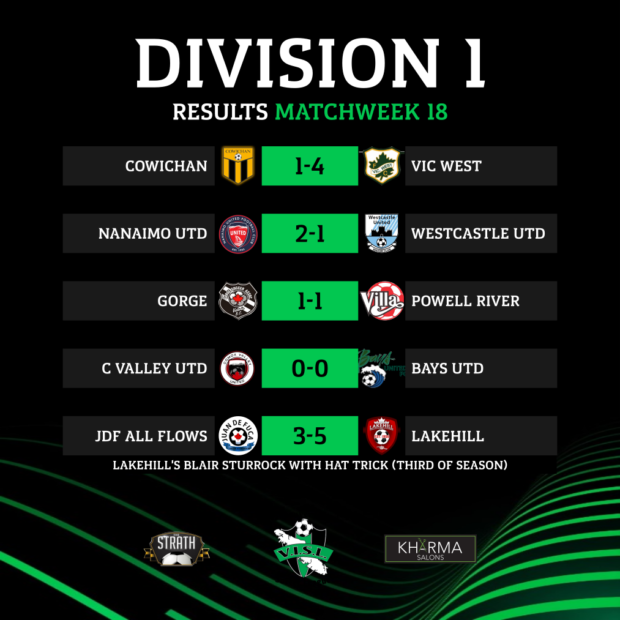 What a weekend for soccer!

Youth and adult players of all ages are getting the extra boost from seeing our Men’s National Team doing so well and it will only keep building grassroots soccer on the Island and more.

The Island’s top flight, Vancouver Island Soccer League (VISL) Division 1, had all five games played on the weekend, and here is that breakdown.

Friday night had plenty of fireworks as Vic West defeated Cowichan 4-1. A spirited affair saw Cowichan receive three red cards, and a goal scored by Colin Knight, but they were outgunned by Vic West, who had goals from Isaac Agyeman, Salem Almardy, and a double from Marcus Campanile.

Friday also saw a tight match in Nanaimo as the hosts slipped by Westcastle 2-1 thanks to goals from Hussen Sayed and Declan Brown. Westcastle’s lone goal was scored by Norbert Cedric Aba.

Saturday started out with a couple of surprising results, the first being Gorge and Powell River Villa battling to a 1-1 draw. The Villa goal that opened up scoring on the day was by Jake Kenmuir, but Kaelan Cooke tied things up for Gorge and the points were shared.

There was another surprising result at Vanier Turf in Comox as Comox Valley held Bays Utd to a 0-0 draw. It was a shared shutout by two Comox Keepers, while the clean sheet for Bays was Mark Rankin.

Saturday wrapped up with league leaders Lakehill defeating Juan de Fuca Allfows 5-3, and making their magic number three points to secure the Garrison Cup. Blair Sturrock hit a hat-trick for Lakehill, with Isaac Koch and Matthew Olaka also on the scoresheet for the leaders. Allflows had a goal from Keevan Webb and Ethan Emile with two.

So after all of that action, the VISL Division 1 standings look as follows: 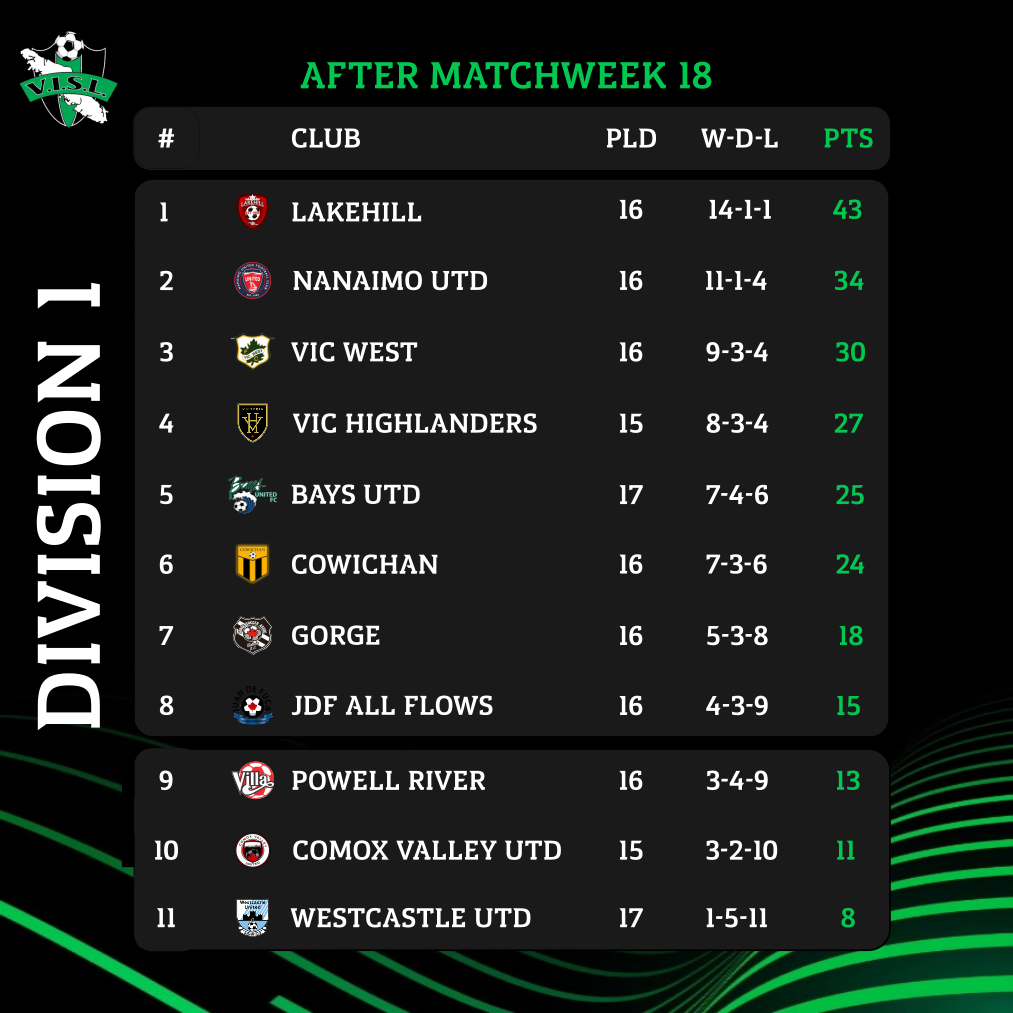 The biggest news from the set of games is Lakehill getting that much closer to winning their second Garrison Cup in three years. They just need one more win, or a Nanaimo loss to hoist the trophy again.

The other big news had both Comox and Powell River securing single points in their games. Those could very well be very important points come time to declare relegation. With Vic West and Nanaimo winning, they have positioned themselves nicely to finish near the top, and qualify for BC Soccer’s Provincial Cup.

The leaderboard for clean sheets remains the same as last weeks, with Lakehill’s Hardeep Gahunia still leading the way on five.

It was a big weekend for scoring for Lakehill’s Blair Sturrock. His three goals gives him a comfortable lead on the leaderboard for the Golden Boot Award. Here is how that race looks: 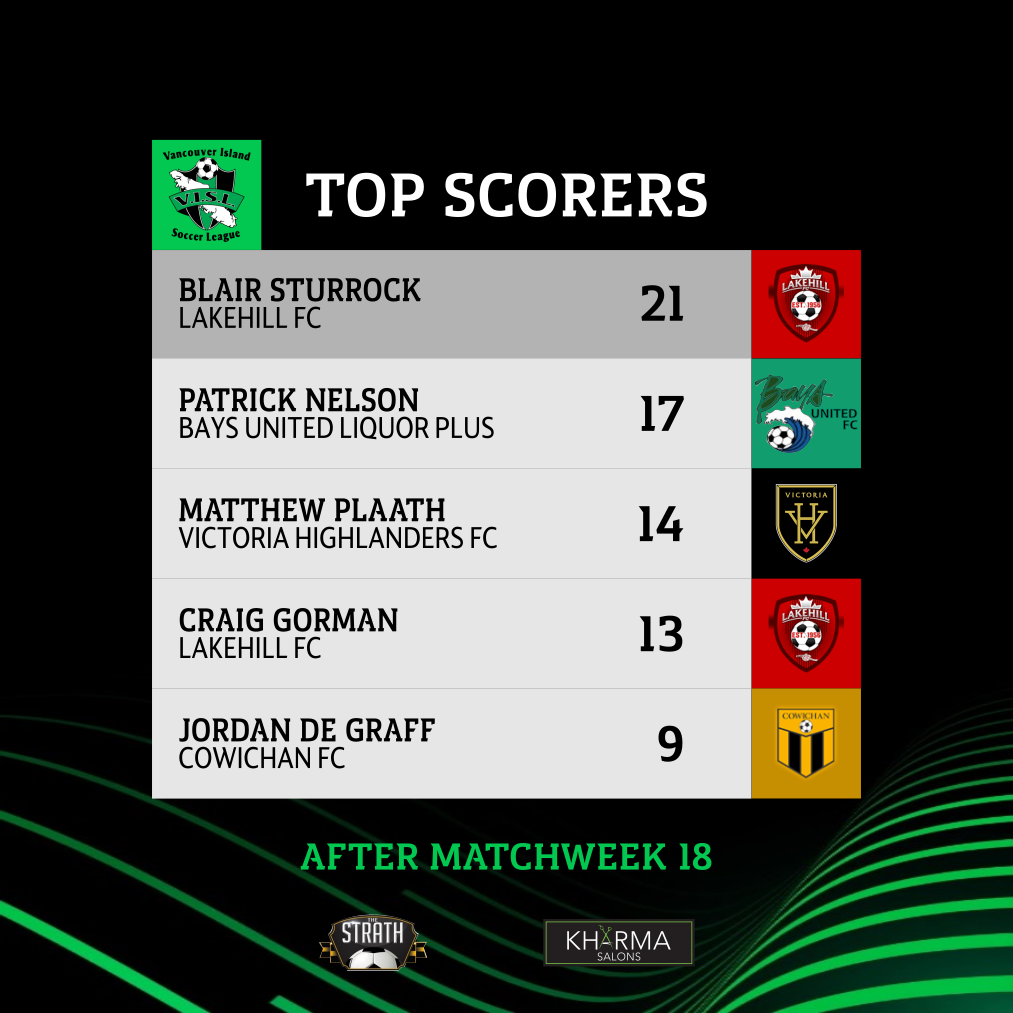 It’s a loaded weekend, and the VISL’s top flight will have it’s busiest weekend of the year starting Friday. Seven games are on tap as four different teams are playing double headers to get more games in.

Out of the gate on Friday night is Lakehill hosting Cowichan at Braefoot – the first game of two that these teams will have against each other this weekend. Lakehill will be looking to capture the divisional trophy – the Garrison Cup. It is the oldest competition in Island League soccer and one of the oldest of all sports on the Island too. A win will allow the Reds to hoist the trophy again – the team that last won the championship before COVID started.

Another game on Friday will have Bays Utd hosting Gorge FC. Both teams are looking for full points as they have been disappointed of late – Bays to get back into the top four discussion, and Gorge to separate from the bottom three and relegation discussion.

Saturday will see Powell River Villa hosting Nanaimo Utd. Powell River are coming off a couple impressive road matches and seem to be playing well. They will need to be as second place Nanaimo are still rolling, but just by slimmest of margins.

The Victoria Highlanders will also host Juan de Fuca Allflows on Saturday at Goudy Turf. JDF will be looking for points so to avoid the bottom three scenario but they will be in tough against a quick young Highlanders squad.

In game 1 of 2 for these teams and their double header, Vic West will host Comox at Finlayson on Saturday. Vic West are coming off a convincing win and Comox coming off a hard fought draw, but Vic West can keep themselves in the top four with a result or two. Comox would love some points to get out of relegation zone.

Sunday sees the back end of both double headers. Cowichan will host Lakehill on an infrequent game on Kesserich Grass field, while Vic West will travel up to Vanier Turf in Comox for their second game as well.

Here’s the full slate of matches in store for you this weekend in Division 1: 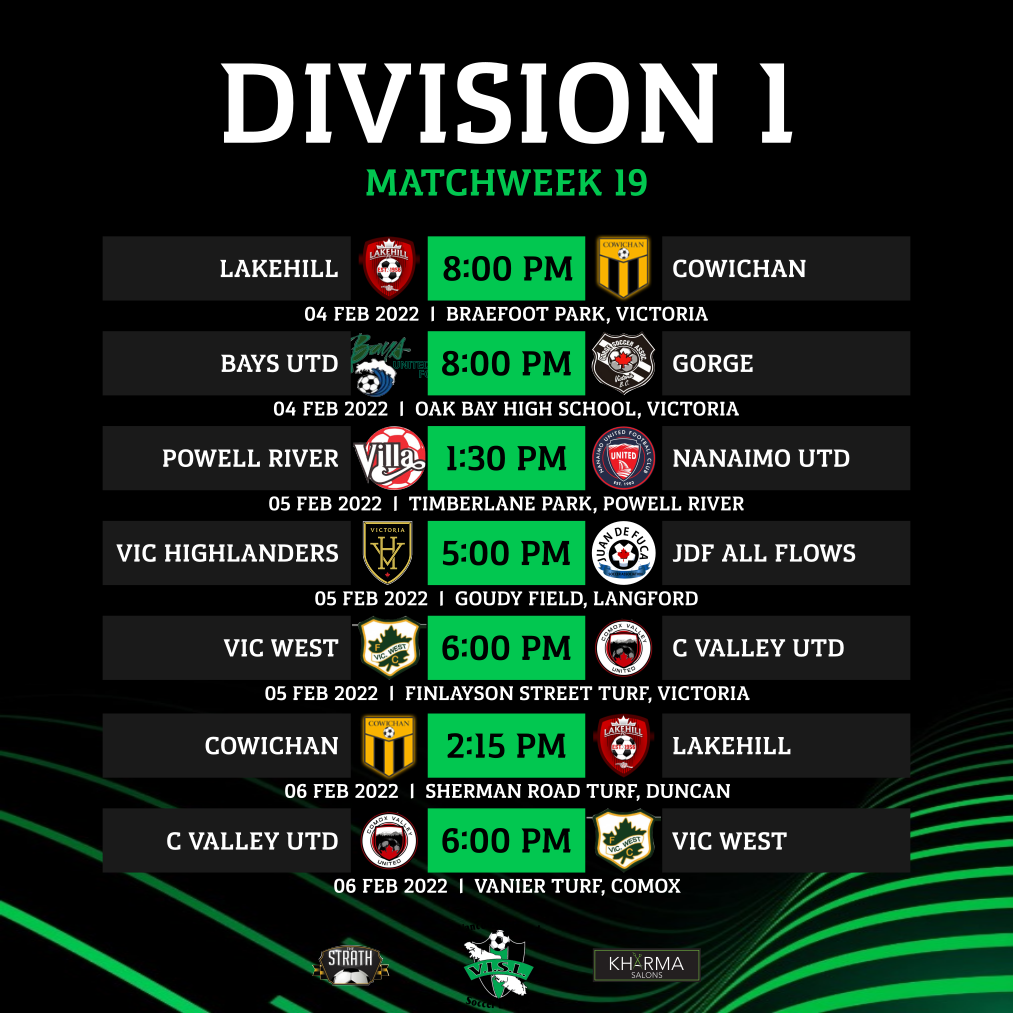