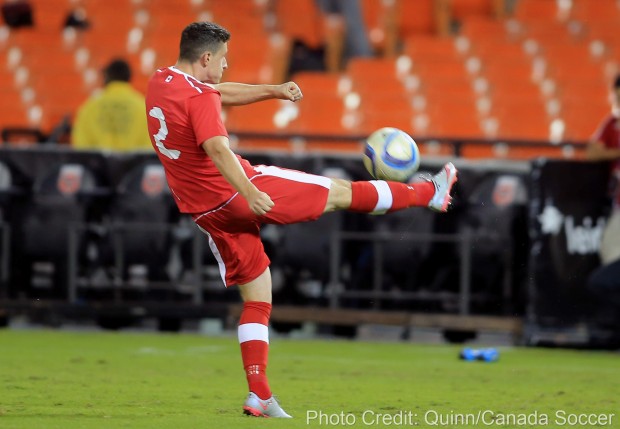 No matter how many times it happens, it never gets any less galling.

For years now, Canada have lost out on several potential international players who have committed to other, more successful, countries through their own or parental birth right. More galling is that many have been developed here and represented Canada at youth level before making the jump

There’s been Jonathan de Guzmán, who committed to the Netherlands whilst his brother chose Canada, Asmir Begović to Bosnia, Owen Hargreaves to England, and Teal Bunbury and Sydney Leroux to the US, to name just a few of more infamous ones.

You finished spitting at your screen yet?

But times they are a changing it would appear. It’s been rather the champagne year for players having the choice of where they want to pledge their international futures and deciding to choose Canada.

What is behind it all of a sudden, who can say for sure? Is it the great crop of young talent coming through the Canadian systems? Perhaps part of it lies in players feeling they’ll more likely play on the international scene for Canada than one of the bigger countries. Whatever it is, let’s just hope it continues.

Junior Hoilett was the latest player to commit, to much fanfare, choosing Canada over Jamaica. Tesho Akindele chose Canada over the US.

Fraser Aird is another key player to pledge his international future to Canada recently. He may not have garnered as many headlines for his decision, but the Glasgow Rangers player looks set to be another key piece of the Canadian national team going forward.

Aird was born in Toronto in 1995 to Scottish parents. Capped for Canada at U-15 level, he made the move to Scotland five days after his 16th birthday to join the club he’d supported all his life, Rangers.

Once at Ibrox, Aird caught the eye of the Scottish selectors and he played for Scotland at U-17 and U-19 levels. As his stock rose and with both Canada and Scotland courting the midfielder for his international future, Aird was faced with one of the toughest decisions of his young life so far.

Aird turned down a call to Canada’s Gold Cup squad in 2013, but after a lot of heartfelt thought, he pledged his international future to Canada last year

“It was tough for me,” Aird admitted to AFTN when we spoke with him at Canada’s training on Thursday. “Obviously born in Canada and playing my football in Scotland. Everyone in my family is from Scotland, other than me and my brother. So it was tough. But I just thought, this is where my roots lie. I was born in Canada, so I think I should play for Canada.”

Words that I’m sure every Canadian soccer fan will loudly applaud and have longed to hear many players say. 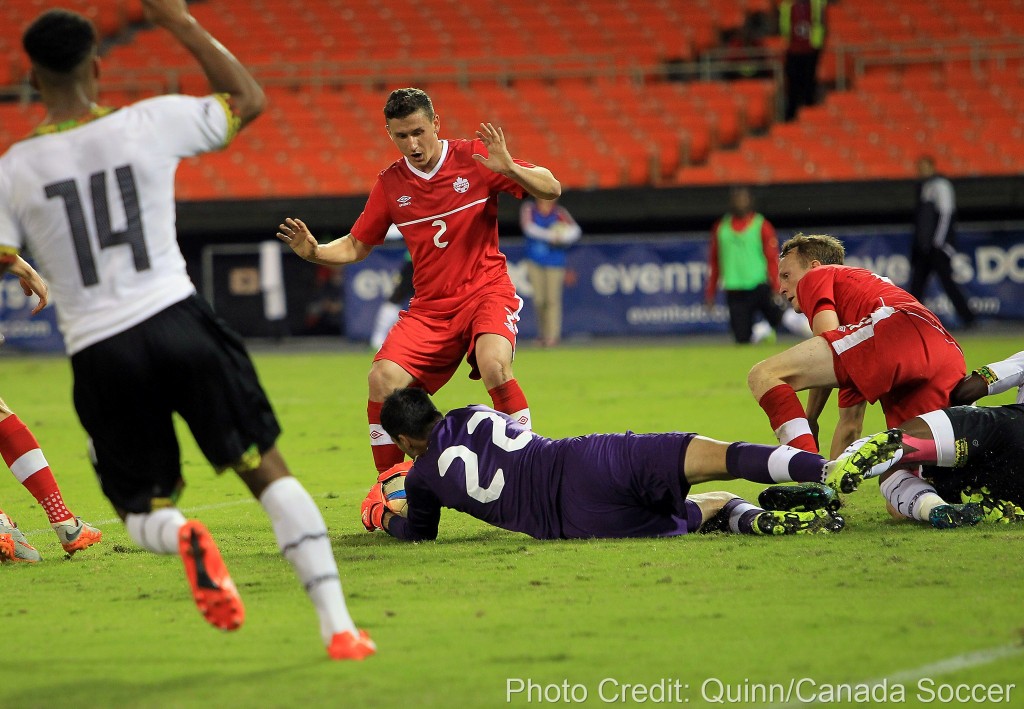 Aird was rewarded with his first senior cap in last month’s friendly against Ghana, when he came on as a second half sub. The start of a new journey for the 20-year-old with Canada, and one which continues with the World Cup qualifier against Honduras at BC Place tonight.

“I’ve obviously made the right choice,” Aird told us. “I got my first cap the last month there and now I’m back with the senior squad. So hopefully long may it continue and I go on and make a few more. But the most important thing is the qualification games coming up and hopefully we can start off with three points here in front of a big crowd on Friday night.”

It’s fair to say that the reaction of some Canadian fans to players that choose to play internationally for other nations hasn’t been the most supportive of their decision. But Aird has had the completely different reaction back in Scotland after his decision to play for Canada.

“They know I’ve made up my mind so it’s put to the back burner a bit,” Aird said. “They know I was born in Canada and they were alright with me making my decision. At the end of the day, it was my decision. No-one else could influence me other than myself.

“But I’ve made my decision now and I’m committed to Canada and hopefully I can go on and have a good career with them.”

The next stage of that is against Canada’s arch-nemesis, Honduras.

Having seen off Belize fairly comfortably in their two-legged third round match-up last time out, Canada kick off the semi-final group stages of CONCACAF qualifying at home in Vancouver tonight before heading to El Salvador on Tuesday and with Mexico waiting in the wings for later.

Points at home are a must and Aird can’t wait to play his part.

“I’m looking forward to it,” Aird told us. “It’s exciting times for Canada with qualification for the World Cup. I think it’s everybody’s dream to go and play in a World Cup. We’ve got a very good squad this time around and I think we can go on and do big things.

“We’ve a chance to go prove ourselves Friday. Our first game’s massive, so we can get off to a good start and hopefully we can go in and get the three points.”

The pressure is on, but Aird knows a thing or two about pressure. It comes automatically when you play your club football with one of Glasgow’s Old Firm rivals.

Aird joined Rangers in February 2011 as a 16-year-old. Coming from a family of avid lifelong Rangers fans, it was a “childhood dream” come true.

That dream soon had the potential to turn into a nightmare, as Aird joined the Gers just before the most turbulent time in the club’s history.

Rangers were declared insolvent in June 2012 and were demoted three divisions, from the Premier League to the Third Division (now League Two). If you want to know how low they’d fallen, they were below my own club, East Fife!

With the club’s immediate future still unclear, their top players departed in their droves, as Rangers started a journey through the lower leagues of Scottish football.

A nightmare time for the club and it’s supporters, but the perfect opportunity for a talented young player to make a name for himself. And it’s been an opportunity Aird has made the most of.

“It’s been interesting,” Aird says of that journey. “It’s been a tough few years for Rangers. Players, fans, everyone involved at the club. But I think it was the best time for a young boy like myself to be at the club because we got our chance. Back in the day, only a few young boys got their chance to break through to the first team and stamp their authority and keep their place in the first team.

“I was lucky enough to be one of them to do that when we went into the Third Division and I’ve been in the first team ever since for the last three years. So hopefully I can keep up my performances with them and hopefully I can keep getting called to play for my country.”

After playing in the Rangers youth system when he first arrived at Ibrox, Aird made his first team debut with Rangers in September 2012 against Montrose. He grabbed his first goal for the Gers three months later against Queens Park and went on to make 22 appearances in all competitions for Rangers during that 2012/13 season, scoring three goals and adding two assists.

Aird is now in his fourth season as a first team regular with Rangers, making 85 total appearances to date, scoring 12 goals and registering 17 assists. Those goals came primarily as a right winger, but under new manager Mark Warburton, Aird has been converted to a right back, adding to the much-needed versatility he can bring to the Canadian national team.

Back to back Championships saw Rangers move to within one more promotion of regaining their top flight status. A Hearts title and a 6-1 aggregate playoff defeat to Motherwell put an end to those hopes last season, but the Gers have started strongly this time around, losing just one league game in the new campaign.

It’s been a battle to get back to the top, but Aird is confident this season will be the last step on that long journey.

“It’s been a tough road, but things are looking a lot more positive now,” Aird feels. “We’re five points clear at the top of the table in the Championship and looking to get promoted this year. Hopefully we can get Rangers back where they belong at the top of Scottish football and get back playing against Celtic four or five times a year because that’s what the Scottish people want to see.”

Playing for one of the Glasgow giants brings with it it’s own set of unique problems for players on both sides of the Old Firm divide. You’re immediately living life in a goldfish bowl.

The passion and, at times, sheer hatred, that the fans have for each other can sometimes boil over to abuse online and in person for players and their families.

Some players can handle it better than others. Some choose to live a little bit outwith the city limits for a quieter life. Aird lives in the heart of the West End of Glasgow and seems to be handling it all just fine.

“It’s alright,” he told us. “I think it’s more good than bad. You get fans coming up to you, saying hello, wanting pictures. Little kids wanting pictures and autographs. It’s a good thing in a sense but you do get your bad times. But it’s a lot more positives than it is the negatives.

“You’re always going to get the negatives here and there, but I love it. I love living in Glasgow. People are friendly. It’s a lovely country. Football’s good and obviously I’m playing for the club I grew up supporting my whole life, so it couldn’t get any better, if I’m honest, for me.”

Apart from a World Cup Finals appearance with Canada of course.