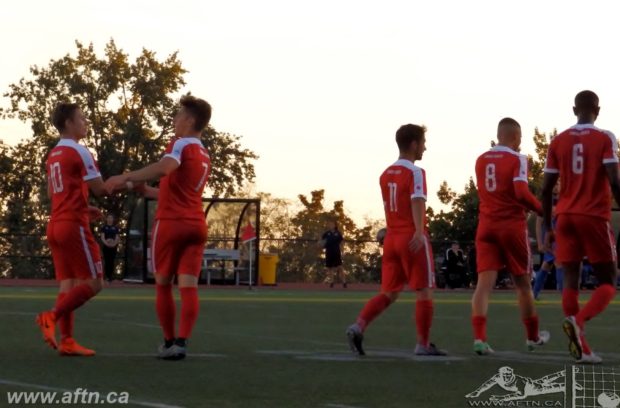 It’s early days, very early, and there’s a long road ahead, but there already feels like there’s something a bit special about this year’s SFU Clan side.

A very comfortable 2-0 win over cross city rivals UBC, in the traditional preseason friendly, was perhaps the first sign. The 8-0 drubbing of the University of Mary in their home opener last week sent a message, along with a warning shot across the bows of the rest of the NCAA II, seeing them move up ten places in the Coaches’ Regional Poll, to be ranked third nationally.

It’s been a strong start and one SFU Clan head coach Clint Schneider feels his side will only build upon.

“UBC’s always really a good bench mark for us,” Schneider told AFTN. “Mike always has a great side, and David Hendrie there, they’re good coaches. They’re always well put together tactically. They’re usually way further ahead of us, and this year’s no different.

“For us to go out there, and play well, we capitalised on a couple of their mistakes for sure, but over the course of the 90 minutes it felt like we were the better team. It’s been a long time since we’ve done that, so that, there, I thought okay, maybe we do have something a little different about this group.

“I thought we were going to be good, but you never know until you play your first competitive game. If this is how it’s going to be for the rest of the season, we could do some damage.”

The vibe around the squad, the powerhouse scoring, and the exciting brand of football they’re producing is very reminiscent of the Clan teams that made it to back to back NCAA II Final Fours in 2012 and 2013.

“Yeah, it feels that way,” Schneider agreed. “The hallmark of this group when we’ve made those Final Four runs was scoring early and keep ploughing on, so I was pleased with that. The guys showed a lot of hunger [against Mary] to just keep going. Even to the very end. And that’s what we asked them to do, regardless who went on the field, it didn’t matter.”

SFU’s home opener last week was as comfortable a first competitive game of the season as any team could have wished for. It was an 8-0 scoreline that could have easily been into double figures, as the Clan crushed a visiting Mary side that looked shellshocked by the time the final klaxon sounded, and must have been left wondering just what had hit them.

What it was, was an eight goal rout, with seven different Clan players getting on the scoresheet, as SFU pummelled Mary’s box with 24 shots to the visitor’s two.

“That’s the expectation,” Schneider said. “Any time we’re at home, zero on the scoreboard for the opposing team and score as many goals as possible. That will be the mentality to carry us through.”

The goals aspect is something that’s been missing a little bit from the Clan in recent seasons. In wrapping up their fifth GNAC title in the last seven seasons, SFU racked up 44 goals in their 18 regular season matches. To put that in some context, when the Clan won the GNAC in 2012, they scored 67 regular season goals, averaging 3.72 goals per game. They hit 62 the year after.

It’s something Schneider hopes he’s addressed, with the goalscoring threat from all over the pitch already evident.

“Last year it was always like can we score more goals?,” Schneider said. “Those two Final Four teams were in the 70s with goals scored. That’s outrageous. Last year we were in the 40 range. We conceded less, great, but when you can score five or six goals and you concede maybe one in a game, it doesn’t matter.

“If you can put teams away early, like we did against Mary, then we can just kind of roll and get guys in, because we have a deep bench this year. Way deeper than last year. That makes my life managing the group a little bit more difficult, but I think it’s going to pay off down the line.”

Goals and dominance aside, the other pleasing aspect of his team’s performances so far has come at the other end of the pitch. Building on last season’s strong defensive showing, where they conceded just 11 goals and kept eight clean sheets, SFU’s backline already looks to be just as miserly this time around.

All the more impressive when you consider they’ve been forced to replace their starting goalkeeper and both fullbacks. Standout keeper Brandon Waston, and defenders Robert Hyams and Anthony Van DeVendel, were three of five Seniors to graduate from the program. Big shoes to fill, but Schneider has a lot of talent at his disposal to do just that. 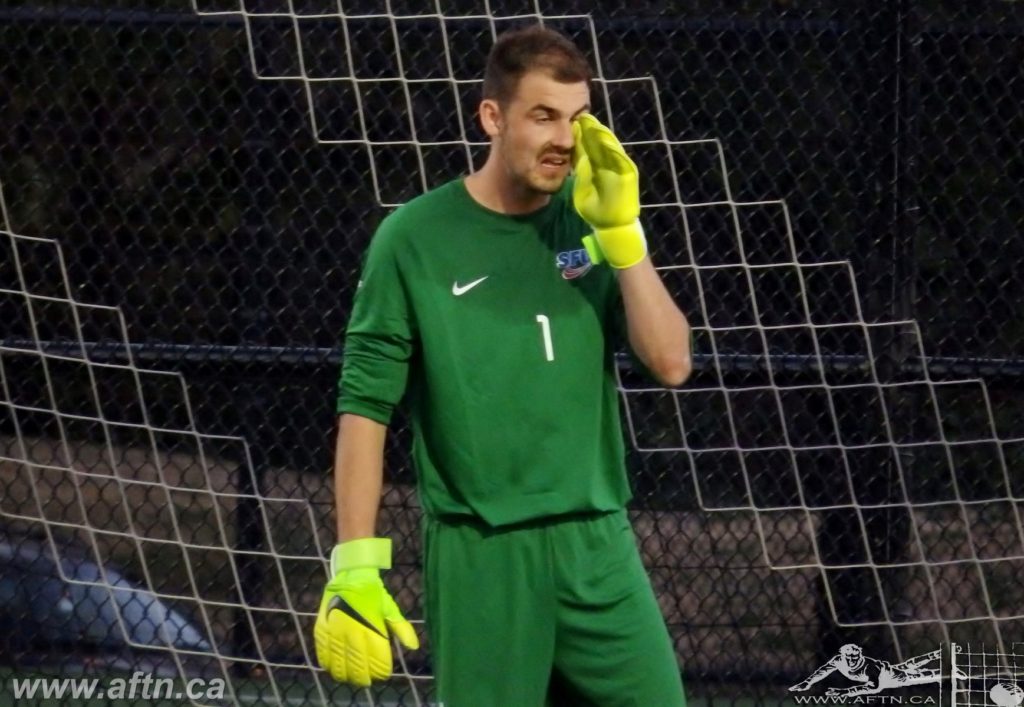 South African Miguel Hof (pictured above) is the man between the sticks this year for the Clan. The redshirted senior hasn’t had a lot to do so far, but cuts a confident figure. Forward Michael North has successfully dropped back to fill the left back role, and sophomore Jeff Cadman and Whitecaps Residency alumni Chris Guerreiro are battling it out for the starting right back role.

Add in two talented seniors, Germany’s Pascal Schmidt and the always impressive Norwegian Magnus Kristensen, marshalling the middle of the defence, and that’s a pretty formidable backline the Clan have out there.

“Maggie and Pascal are excellent,” Schneider told us. “Two of our most technical players in the whole team in passing. Left foot, right foot, it doesn’t matter. We had to replace both full backs. We moved Michael North back there to left back and it’s been a natural fit.

“Then Jeff Cadman and Chris Guerrero, who is a former Whitecaps player, have been battling it out to see who is going to be the right back and it’s still tight there. Jeff got the nod because he had a better last exhibition game, but Chris is right there.”

Kristensen and Schmidt’s experience and leadership will be vital this season, along with Hof and the deadly Adam Jones. Those four are the only Seniors on SFU’s 25 man squad. There’s eight Freshman. Last year there were 10. Everyone is expected to step up, and Schneider is delighted with the early results.

“Credit to the older guys,” Schneider said. “We have a leadership group, Adam Jones, Brendan Shaw, Magnus Kristensen, Jeff Cadman, Marcello Polisi, and those guys were elected by their team members to establish some consistencies we want to have with the group, and expectations, and so far so good.” 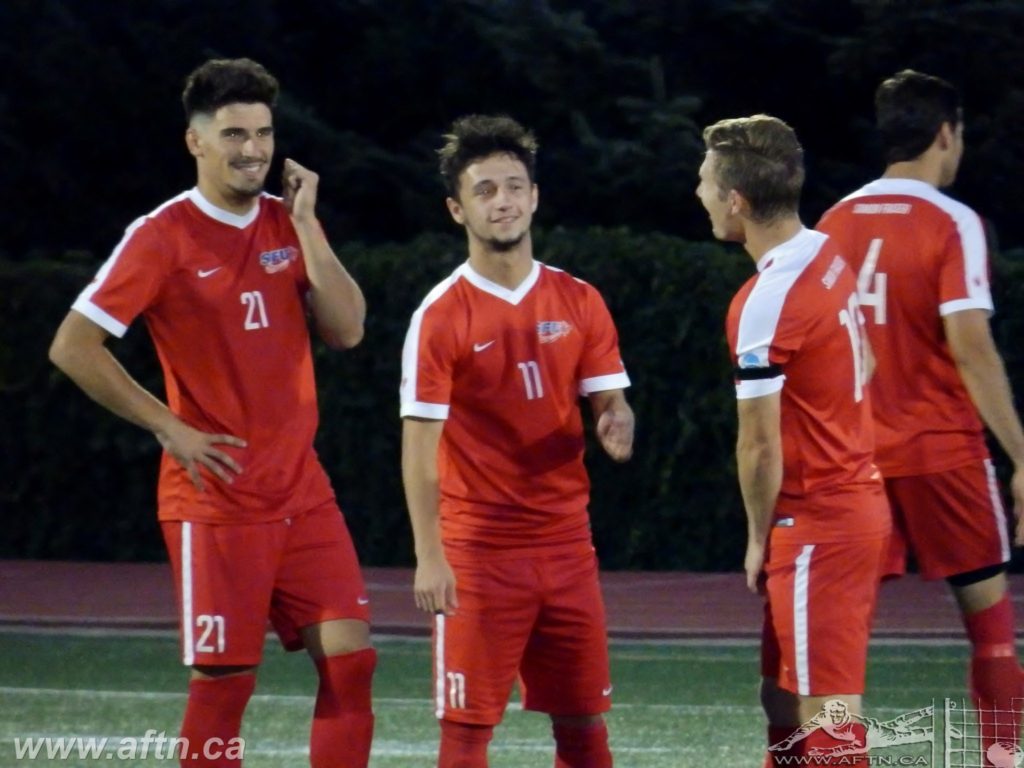 It feels like a period of stability for the group. Key players will continue to move on at the end of this season, but with a number of important Juniors and Sophomores on the squad, this is a team that will stay together for a good couple of years.

And the talent runs deep at almost every position.

“We’re seeing the fruits of competitiveness in the group,” Schneider added. “There’s a lot of guys that are really trying to push the players ahead of them. There are guys on the bench who are good enough to get minutes. It’s just the way it is right now. It’s tight with that stuff. So a very competitive group. A very deep group. Hungry.”

Last season saw the Clan crash out of the playoffs at the first hurdle, after being held scoreless over normal and extra time by Cal Poly Pomona before going out 4-3 on penalties.

“They know last year we should have done more,” Schneider admits. “That’s football of course. Anything happens in a shootout. But I think we have the group to do something, but we’ll take it game by game. Coach speak, I know, but it really is important.”

SFU will get their an early chance of revenge on Cal Poly Pomona in the second of two road games this weekend in Montana as part of the Rimrock Classic. That match takes place on Sunday, with California State University San Bernardino first up on Friday. It’s the Clan’s first two away matches of the season and will be an interesting gauge to just how good this team can be this season.