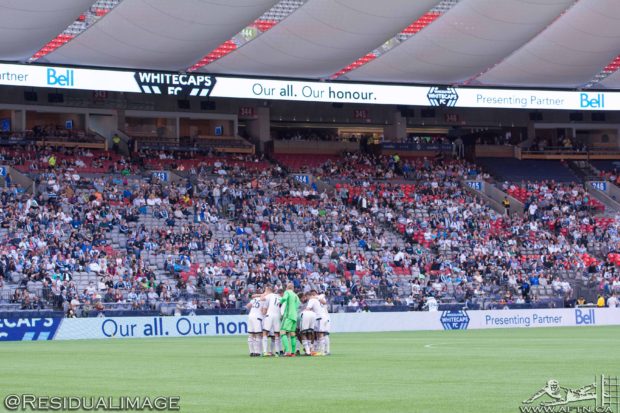 There is a famous scene in The Right Stuff about Chuck Yeager breaking the sound barrier. As he accelerates towards the speed of sound, his aircraft begins to shake and rattle, and everyone fears that it will come apart. What separated Yeager from many other test pilots was how he didn’t let that phase him at all, and he just kept flying until finally he pushed through the sound barrier and found free and smooth air on the other side of Mach 1.

Mathematically there is still a chance that we will win the MLS Cup and be declared champions of this ridiculous league. But I think we know that that isn’t going to happen. Realistically, we can rally and win the Cascadia Cup, maybe win our Champions League group and possibly, if we win six games in a row, sneak into 6th place in the Western Conference with a chance to get battered on the road in a playoff game. If that happened, it would probably redeem the season, or at least induce such huge levels of amnesia that we wouldn’t remember the debacles and the embarrassments.

Saturday was our whole season wrapped up in several missed chances, a defensive lapse, and some appalling, infantile, and irresponsible refereeing. I wasn’t at the match, which gave me the chance to hear Russell Teibert declare at halftime that “we have to play for them” as he gestured up at the supporters surrounding the Southside tunnel, who were raining hell down on MLS “officials” who had just sent our manager to the stands for rightly pointing out how badly wrong the referees were.

Right now, as a ‘Caps supporter, and indeed as a Canada men’s team supporter too, it feels like that moment where Yeager breaks the sound barrier. There is no more tension. There is no more anxiety. Nothing left to worry about. We have either very little (Whitecaps) or no (Canada) chance to progress in our respective competitions and so it is free and clear.

We are dire. We’re bad. We’re not in last place only because Houston is a radioactive tire fire. We’re a team that will be redesigned and relaunched next year. In MLS, you can turn a season around 180 degrees in a season (hello Colorado), and so we suck back these dime bags of hope. But for now there is nothing we can do but go along to the matches and sing and enjoy ourselves.

This season is over but for the surprises. The outrage we’ve been piling on the front office has been registered and it didn’t make much difference. Those guys are clearly going to be here for a while, because they do just enough to keep the owners happy and they can let a poor season roll off their backs because this team has indeed gotten better every year from 2011-15. One bad year, so what?

So fans will decide whether they will come to any more games this year or whether they will buy tickets next year. Some will, some won’t. Some are fickle for wins, some only want certain conditions in place before they renew – be it a new manager, front office or Nicolas Bendtner as a DP (so you can give up on that one now unless you’re also a Forest fan) – none of which will sway any decision maker’s opinion. The rest of us will come back because, after all, this up and down roller coaster ride of shit and disappointment followed by surprises like our 3-0 thrashing of SKC in the Champions League is just part of the deal. Football makes us suckers for punishment, because of the elusive promise of a thrilling high.

Russell Teibert seemed sincere when he said he wants to play for us. If we care about the players, we can choose to show up and give them something to play for. They aren’t all that motivated to show up for the fickle fans and shitlarks. Who would be? But someone needs to bootstrap the cycle of support and results that, in a couple of years, we will be celebrating. That’s just our job. It’s our only job, really. It doesn’t mean we have to be positive all the time – we wear our hearts on our sleeves and are proud to do so. But it does mean showing up to play our part. Or not, and moving on. Or, I suppose, to stand there week after week suffering because you hate what you’re watching, but you can’t bear to turn away. I’ve felt all that this season.

Players will move on. Several of the guys you are watching every week will be in different cities next year. Just knowing that now makes it easier for me to show up for the next few weeks. You can just go along to the games, enjoy a day out with friends and family. Don’t expect too much. Take out the week’s frustrations and aggressions on clueless referees and maybe get to witness one of those magic games where, with the pressure off, everything seems to just fly more easily: balls into nets, defenders into tackles, supporters into song. Saturday was, even by the standards of this season, truly horrible, the first match I can say I was glad I missed. Most weeks, even if it’s bad down on the pitch, it’s still fun in the stands. There is still something cool to me about a section full of waving flags, even if it’s for a moment.

Who knows? We have had so little to cheer for this year, but like the 3-0 SKC win, sometimes you get that hit you’re looking for. Sometimes things click on the pitch and in the stands it becomes and event and a party. And it’s fucking football, so it doesn’t matter how dire it gets, literally anything can happen. We might not have any more of those nights left in 2016. Mathematically speaking the chances are low.

But then again, we might. It’s easier to hope for that with the shaking and the stress gone. With nothing left to lose, it’s clear skies, and nowhere to go but up.