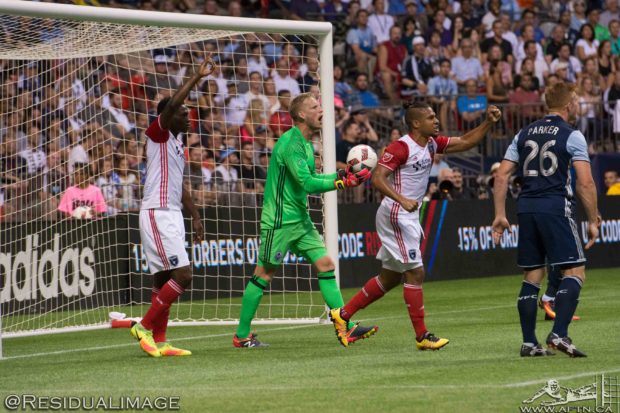 With the Whitecaps skidding through the summer again and falling well short of our expectations, the supporter base has been thrown into a tizzy about what to do. Options currently range from being so positive that you attack other supporters who are publicly expressing doubts in the team, all the way through to giving up season tickets and choosing to join the Umbrella Ultras, and spend the winter singing Vancouver United to First Division dominance in the Vancouver Men’s Soccer League. It’s a question of somehow striking the right balance.

I have to admit that I’ve been waffling extensively somewhere between the poles. I’ve called out #shitlarks before, but, while I am considering starting a one-man Bowen Island FC supporters club for our Third Division VMSL side, I’ve already chosen to renew my season’s tickets for next season, as have many of the rest of the jaded yet stalwart Pigeon Casuals haunting the upper reaches of 253.

I think we have decided that the best way to fight complacency is by being whatever the opposite of complacent is. Try to find hooks of engagement, while not being too invested in performances that are almost bound to let us down and always willing to be surprised.

There can be nothing more frustrating than watching people who are good at what they do simply go through the motions. The root of the frustration many supporters are feeling with the team right now stems from watching eleven guys lump a ball around as if they don’t care much about each other, as if all of the ideas and creativity they have brought to their lives suddenly amount for nothing.

I assume that having devoted your entire life to playing football, once you step onto a stage as big as MLS you can’t wait to do all the things you’ve dreamed of doing. This is your chance, to play with players who are finally as good or better than you are. To play in front of more than 20,000 people who want to do nothing more than cheer and sing for you. And even if you are on a crap team, you can at least bring us to our feet with a beautiful pass, a stunning goal, a crunching tackle, a brilliant save.

I cannot imagine any player making it to MLS and saying “finally I get to lump a hopeful ball 40 yards up the pitch to a player who is double teamed. I’ve dreamed of this moment for all my life.”

It does feel of late that we are watching some players who don’t look like they are living out their dreams. In fact after the San Jose loss, my daughter pronounced her verdict on the match with “they play like they all hate each other.” Complacency can come to all of us when we do the same thing over and over, but when it sets in – whether among players or supporters – it takes its toll, poisoned by a cynicism that draws down the character of a team.

Who fires this team up? Ousted. Who else? Who turns to the supporters and gets us involved? Even when the ‘Caps were dire in 2011, Jay DeMerit, Mouloud Akloul, and Eric Hassli all got us on our feet and they backed up their energy with good play.

On Friday night, after treating us to a miserable ninety minutes, some important team meeting was held on the pitch and only David Ousted came to greet us. I have to admit that when you’ve paid good money, sung and cheered your boys on and stayed to the end to watch Nico nick a lovely header, it’s nice when a player comes over to thank you. Ousted does that constantly, Harvey too. The others applauded a bit from the centre circle and trotted off. Fraser Aird apologized later on twitter, which was unnecessary, as he was one of the guys actually worth watching.

There is still something to love about this team and to hold your attention if you are a supporter. We aren’t yet completely out of the playoffs, and there is still the CCL and the Cascadia Cup to play for. The latter is very important to the supporters groups that created it, and having won it more than Portland or Seattle, it would be nice to get a sixth. And while many of us are losing faith in some of the core guys that have seen us through the past could of years, there is Davies, Nico, Parker, Bolaños, and maybe Edgar and Barnes to cheer for as they come on with the team.

But that’s all it has come down to, and even bright curiosity can be easily dulled with torrid football. In the Southside I think we are just looking for someone to take the bull by the horns. If we are serious about redeeming this season we’re all looking for a player who does the work of changing their own mind. We’ll get behind that guy. We want to see him in front of the supporters sections exhorting us to follow his example, we want to see his desire backed up with a spirited on-field performance.

Now is not the time for mercurial dispositions, or head scratching bewilderment. Now is the time for a goal struck with confidence, a crunching tackle, a game changing performance that we can all be proud of. Now is the time to decide to show a bit of heart and commitment. We are not here to fritter away ninety minutes for guys that play like they hate each other. If you can’t play for each other, at least play for us. We’ll be here for you.