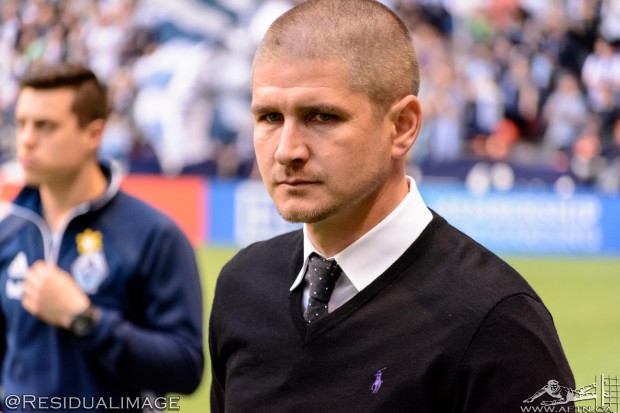 Every match is an unmarked canvas. If you hang around the edges of the pre-game conversations in the bars and restaurants around BC Place, you will see a cloud of witnesses trying to get a crack of insight about how this is going to go. There is something about the basic uncertainty of the result in football that toys with our comfort. We love the thrill of being on the edge, but it unnerves us a little too and perhaps with just a little foresight, we can be prepared for what comes.

This is what drives the multi-billion dollar betting industry. Football throws you a tantalizing possibility: there are good odds that certain things will happen. The mark of a fan-in-the-know is that you called them in advance.

But who wants to know what the result is going to be before we’ve even kicked off?

What more is gained from being able to say “I told you so” over the surprise contained in each of those 90 minutes that ticks by? Some complain that football isn’t the most riveting game in the world, but I can’t see how that view is possible. Two forty-five minute halves of non-stop play in which any given moment can be the turning point that opens up a whole new time line, that shreds a million betting slips, that elicits an collective emotional torrent that takes everyone by surprise. What could possibly be more riveting than that?

Of course if I was a betting man, I’d have put money on the strong probability that yet another officiating decision would decide Saturday’s game for better or for worse. While I was fully prepared for outrage and anger, for an influential referee or a crowd of Galacticos calling for cards, I wasn’t prepared for the emotion that came to dominate the 27,000 souls at BC Place at the weekend.

There is something about being the most hated and pilloried team in MLS, especially given that it’s not a reputation any of us asked for. We used to parade around our moral superiority over teams of divers and cheats like Dallas and Seattle and Montreal, safe in the knowledge that we strive to play the game the better way. But whether we have manufactured this reputation or it has simply come upon us, we now seem to be wearing the shoe on the other foot, and it’s an identity that, until last Saturday, we wore with a mixed bag of shame and secret delight.

When Matias Laba won the ball and continued straight through Mike Magee (who later stood up holding the wrong injured leg and played the rest of the match like a man renewed by a tropical holiday) we knew the inevitable result. It was as if the ref Jair Marrufo, in reaching for the yellow card, suddenly remembered where he was. The Canadian exchange rate turns all yellows into reds.

It was yet another outrage, another injustice rained upon our team, an insult to the fans who, as our beloved manager said, pay our hard earned money to watch the best on the field, 11v11. With the loss of Pedro Morales and Kekuta Manneh before the half, and a lingering worry about the fitness of these two, we were suddenly relying on Andrew Jacobson and Christian Bolaños, and eight others, to carry our hopes forward for the night.

And so half time was a dire quarter hour of conversations among a stadium full of increasingly drunken Eeyores.

After the half something remarkable happened. I have no idea if it was related to an on-field incident or it just arose out of the stands. Around the 55th minute we were deep into a sustained song that seemed to take in the whole Southside and a new quality bubbled to the surface: defiance. For the last half an hour of the match, there was a rising intensity in the singing. The capos were exhausted at the front of our sections, but songs kept coming out of the stands and the drummers picked up the tempo and drove us on.

The players perhaps sensed it too and seemed to play with a renewed vigour. We slipped on the cloak of MLS whipping boys and we wore it with distinction. LA couldn’t get anything going against us. They began to fall into the pattern that has dominated this fixture since 2013, unable to find a crack in our armour, unable to take their chances, unable to slip anything past us. And when they did muster something, our magnificent keeper, our Danish genius, stopped a shot with his face, right in front of us.

If you’re not singing now, you’re either passed out, or you will never understand why football is so riveting. The men on the backline heard their names showering down from the Southside, and the songs kept them up. Even Cristian Techera, that little bug who was whipping around the midfield like a demonic moth with too many flames to choose from, tracked back and got in on the action, delivering a sliding tackle right into the Southsiders banner. There was no way we were getting beat. An impossibility had become an inevitability.

I remember last season leaving this same fixture with a comprehensive 2-0 win and Bruce Arena praising the quality of our team. I felt confident, and almost smug. The feeling was warm and happy, satisfied that maybe this year we had finally arrived among the MLS’s elite teams.

Saturday night I left with my jaw clenched and my fists balled up, hoarse from cheering every tackle, not so much smug but rather secure in the knowledge that when we sang “You couldn’t beat ten men” we were simply stating a fact. We were singing the truth. We don’t need to complain that we are the team that everyone now hates. We don’t need to embrace it. We now know we can stand in defiance of it.

Did you see Kendall Waston leave the pitch on Saturday night? He strode directly off the field, seething at the situation he had been put in. But he was a beast and you could see that some indomitable spirit had been lit within him.

Mati Laba’s red card did not give us an advantage, but I’m almost glad it happened. We now know we don’t need to feel sorry for ourselves, because regardless of what the Disciplinary Committee does, or whatever referees see, we know we can get points in the midst of this adversity. Three undefeated matches on the trot against a tsunami of Kafka-esque administrative nonsense.

In an ultra competitive Western Conference we sit sixth, despite having a new suspension every week. A defiant team that won’t quit in front of us, that doesn’t care what anyone thinks of it.

That’s worth singing for.