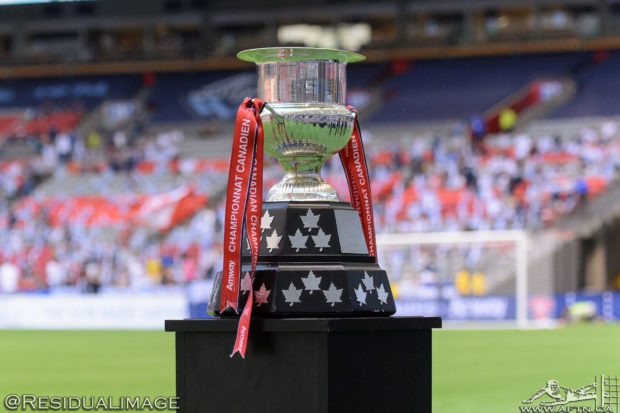 The difference between the two teams was a bit of luck from a deflection of a Sebastian Giovinco shot, giving TFC a narrow one goal lead to take into BC Place next Wednesday in the second leg.

The tie is delicately poised but that lack of an away goal could still come back to haunt Vancouver.

The ‘Caps went for a Canadian-heavy line-up of mixed experience, with DP’s Pedro Morales and Octavio Rivero getting the start alongside 15-year-old Alphonso Davies.

Vancouver knew the importance of an away goal, or two, and went about trying to get one early.

Octavio Rivero had a couple of chances, seeing his header tipped over in the 4th minute before firing into the sidenetting two minutes later.

Neither side’s midfield was able to get a grip on the game and chances in general were very much at a premium.

Clint Irwin spilled a low Sam Adekugbe shot in the 26th minute, but Rivero was unable to poke home the rebound.

Toronto’s first real try in anger came in the 33rd minute when Paolo Tornaghi got down well to turn away a dipping Sebastian Giovinco free kick.

TFC took the lead two minutes before half time thanks to a lucky deflection. with Giovinco’s shot hitting off Waston, redirecting the ball past Tornaghi.

And that was that for the first half. Both teams were still very much in it, with a lot of football left to play out in this one.

Toronto made most of the running to start the second half, and Giovinco came close to adding a second when he crashed a 53rd minute effort off the right post.

Irwin had looked a little shaky at spells but had to be at his best to tip over a Kendall Waston shot in the 70th minute. Vancouver kept the pressure on an Irwin was called into action again to keep out a Bolanos shot at his near post.

But that was about it for the action. Both teams had a few half chances to see out the match, but nothing too threatening.

Toronto will head into the second leg as narrow favourites. An early Vancouver goal immediately ties things back up, but Toronto will be happy to play the waiting game and hit on the counter to grab the away goal that would completely change the dynamic of the ties.

The ‘Caps just need to control (or kick, I’m fine with either option) Giovinco. Once again Toronto showed that without him they have very little to worry teams.

Game on. We’re just a half time and there’s a lot of football left to be played.

Thoughts on the match?

What did you mean by interesting game of football?

“Well I thought it was two decent teams but we went slightly younger against Toronto, in the first game against Ottawa I also did that and made a number of changes with young players. We had to dig ourselves out of a hole in that second leg but you have to try and mix and match with a difficult road stretch coming. So I played a number of youngsters including a fifteen year old boy today but it was a great test for us. We were unlucky not to get our goal in the first half and they got their goal and second half were a better team. We dodged a few bullets and hung in there so yes, it was an interesting game.”

How do you feel going home down a goal?

“Obviously we tried to get the away goal and tried to get it early with a number of key chances but we were unable to take it and sometimes that happens. But you must get on with it, the goal they scored was a bit fortuitous and we have to do better in that respect. In the second half they deserved a goal so I thought the result was a fair one.”

First chance for some of us to see your young 15 year old (A. Davies) in action, what sort of player is he and what is the future for him?

“He’s a young player obviously who has incredible potential who plays with a free mind and a free spirit. The frightening thing is he is yet to be coached and I didn’t want to give him too much information today but with the attributes that he has, his physicality, how he glides with the ball, poise in possession is phenomenal. He didn’t look out of place today which was great for him.”

Thoughts on the match..

“I think it was a decent result. Obviously we would have liked to get a goal away from home but it’s still a wide open and now we’re going back and we just need to score a few goals to win the trophy.”

What did coach say to you prior to the match?

“I don’t think it was really to do anything different, I think it’s just to play simple and keep doing what I’ve been doing with the USL and in training and just keep it simple.”

On the partnership in the middle with Russell Teibert…

“Yeah, it’s great playing with Rusty in there, he’s an incredibly hard worker and for me he was communicating and keeping me calm out there.”

Talk about what this means for you being a Canadian and playing in this game..

“It’s huge. I take great pride in playing for the Whitecaps and especially this tournament as well. I watched the Amway Cup growing up so it’s pretty special to be able to play in it now.”

Thoughts on the game..

“We’re leaving without a result, it’s not the best but we had a very good first half and that’s what we have to look at. In the second half we tried to score the tie but it didn’t come but at least we didn’t concede anything else and now next week we’re going to go for the cup.”

How important was it to not concede a second goal?

“For sure, one-zero is a result that still opens the game. We have another 90 minutes and we’re going to go home to our fans to try and win the game.”

“I’ve known him for a while, back in Italy. He scored on me this game but it was with a little bit of luck I told him and we had a laugh at the end of the game. I’m going to wait for him next Wednesday.”

Thoughts on the match?

Was it a fair result?

“Yes, I think so. At the end of the day you have to score a goal to earn a goal. Should we have scored more goals yes, should they have scored a goal, well, maybe. But if you don’t score it doesn’t count for anything. I thought we were very lackluster and slow in the first half and as such we were turning over the ball too quickly and allowing them into transition quickly. Defending too much and looked energy less. In the second half the ball moved a lot better, crisper and started taking advantages of the spaces available to us. By holding the ball up we were able to get guys into better attacking positions and as such created better chances on goal. I thought our second half was some of our better attacking soccer of the year.”

Is that Mo Babouli’s best performance of the year?

“No, he had a better performance against New York where he had a fantastic 90 minutes, tonight he had a great 45 minutes but I would say that about most players today. But I would like to get him off the zero and get him on to the board. I think guys that are used to scoring goals use it as a measure of their performance. Get him his first goal and his confidence will grow and I thought he had a terrific second half.”

“I think when we pass it twice and it ends up on his foot and tries to beat a few guys to score it won’t be a formula for success for anybody. In the second half the ball started to move quicker, more people get involved, they have to defend more people and then space opens up for him and he is left in one on one situation versus one on four situations and then his impact becomes exponentially more interesting. It’s important as a team we play better and move the ball better and he works with us as a group to move the ball and it will create more space and pockets. As we were more patient with our build up and attack in setting things up more pockets opened up and our team attacks looked better and we were able to sustain them and keep the ball in their half. We spent more energy defending in the first half; the second half was a different story.”

Thoughts on the game

“It’s simple, the first half was bad. It was probably one of our worst. In the second half we turned it around and it became one of our best. We couldn’t score that second goal but we have to stay attentive in our next game.”

How do you feel getting back on the score sheet?

“I’m happy because I like to score goals. I’m also happy how it went tonight and I hope to continue to score more.”

You seemed pretty angry with the assistant referee at the end of the first half, do you feel like you were being a little tough on them?

“During the game there were moments of agitation. I didn’t want to offend anybody, maybe it came off as being a little bit violent which is why I went over and shook her hand to ask forgiveness.”

Thoughts on the game?

“In the first half we didn’t come out very sharp. I thought in the second half we came out with a little more urgency, realizing it was a cup final. We were happy that we did not give up any goals but we still have a lot of work to do in the second leg.”

Are you worried about having a one goal lead going into Vancouver?

“We wish it could be more but we have shown that we can keep clean sheets. We are comfortable with that. We know that they have to come out and attack us and hopefully give us the space to get a goal. We know that an away goal would be huge for us. It’s not ideal but at the same time we didn’t really give them much of anything.”