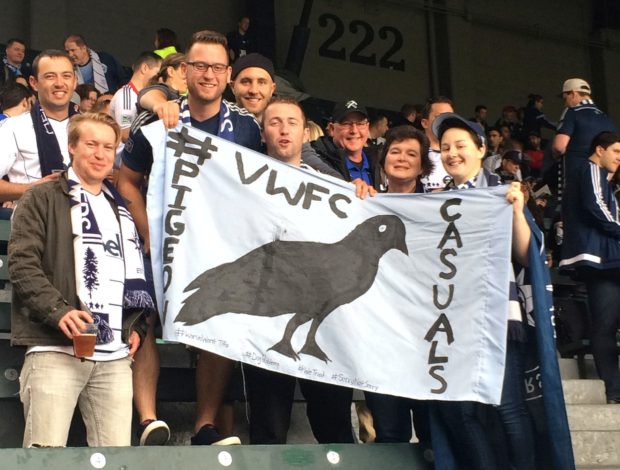 Last week Robbo sat down with Michael on the AFTN podcast and declared, yet again and for all to hear, that Vancouver Whitecaps are a team that will focus on developing young players, bringing them through and supplementing them with experienced veterans. That has been a pretty consistent message over the past three years, and despite some supporters clamouring for a “big name, big money” approach to MLS success, I can’t imagine the team being more clear about their intentions and strategy. It is what it is.

The approach the club has taken is not without success in MLS. Indeed, there are two basic approaches to winning the league and the Cup: buy or develop. Both have data to support that they work. You can choose to be LA Galaxy and Seattle and buy your way to titles (with good academies and excellent coaching) or you can develop from within and take a more modest approach to results such as Dallas and Colorado and Portland (with a few decent DPs added in). We are doing the latter for the foreseeable future. To pretend otherwise is foolish.

As part of the discussion though, it has been interesting to see the way people react to the plan to develop younger players from within. On the one hand, it is great to see young guys coming through, and on the other hand the relentless demand for results means that many supporters are impatient with this approach. In a world where there is no room for mistakes, a young player having a 45 minute howler can result in a sharp loss of support, such as we saw with Fraser Aird and Marco Bustos last year. It’s unfair to these developing players, learning their position at the highest levels, but it’s hard to fault supporters for demanding positive results in the scoreline.

In the past, when football was not such a global phenomenon, recruiting and securing local talent was the way you made your club successful. Your players came from your town or region and you were behind them because you supported them, you knew their families or – like Ben McKendry – they had stood with you in the supporters section as kids.

But as football became economically stratified, the strategy at the highest levels became about winning the league at all costs, and with the advent of Bosman and the international transfer market, this meant that it was almost easier to buy a championship team than to develop one. In MLS this is truer still given the gulf in class between the international market and the local talent pool in most places, but it’s true even at the deepest levels of the professional pyramids in England too. Alan Hansen’s prescient utterance of “you can’t win anything with kids” seemed to mark a watershed moment in this respect.

As a result, the English development system has been in disarray for the past 20 years. Even in League Two the demand for results makes it wickedly difficult for a manager to field a crop of promising youngsters against the howls of “I didn’t pay good money to watch this.” Some League Two teams don’t even have academies anymore.

Somewhere along the line professional sports became a commodities market, and that is truer in MLS and North American sports than perhaps anywhere else outside of IPL Twenty20 cricket. And yet MLS was also set up to be a development vehicle for the US National Men’s Team, paid for by selling its entertainment value. David Villa and Kaka and Drogba and Giovinco put the bums in the seats to pay for Darlington Nagbe, Graham Zusi and, perhaps, Kekuta Manneh to ply their trade and become USMNT contributors.

Canadian soccer benefits marginally in an almost collateral way from this set up, although MLS does not make it easy for Canadians to develop in this league. We are still treated like guests in an American enterprise, but the ‘Caps, TFC and Montreal own a significant chunk of the future of the Canadian Team. The players that we witness out there learning their trade, stumbling and falling through a torrid 45 minutes, trying to get their asses off the bench for a first team start are the raw materials of Canada’s future qualification for a World Cup Finals.

For supporters I think this moment asks a question of us. To what extent are we willing to continue to support a team that has its expressed priority on developing success from within rather than buying it from abroad? For me that answer is clear. I’m all in more perhaps BECAUSE we are committed to young players than to glory hunting. But that doesn’t mean I’m tolerant of shit years.

One of the reasons AFTN covers such a depth of local football stories is to help supporters understand what lurks beneath the glossy first team images. There are hundreds of stories of local players and young players from elsewhere in the Whitecaps development system that you can get behind and support. In fact if anyone needs your support it is these young fellas, not the world class DPs that are only too happy to show up for a price until their knees start going.

These young guys have the power to lift you from your seat, as Alphonso Davies did numerous times last year. They are worth the price of admission when they are on their game. They are the future of our national team, they got us through the CCL group stages with the first seed, and they won us our first Voyageurs Cup. Our silverware in the MLS era has been delivered by teams made up of these players.

If your support hangs only on the acquisition of an MLS Cup through purchase you are going to miss this adventure. If you want to reclaim support for something other than corporate outcomes or glory hunting, there is a bigger story being told.

The reality is that supporting the Whitecaps these days is a constant balance between wanting the sexy and high profile results, and appreciating the developmental pathway of our younger players. Even though the constraints of the league make it so, I don’t have a problem with that. I love the trophies we have won and I would dearly love a Supporters Shield and an MLS Cup. I would love it even more if they were brought to me by a side stocked with players that we watched grow up and learn their trade here, because, like the Voyageurs Cup last year, those trophies would be Whitecaps trophies, not trophies solely acquired on the backs of high profile rent boys paid for by an aloof owner’s fortune for our mere entertainment. We all have Manchester City for that.

Next Article
There are 16 comments for this article