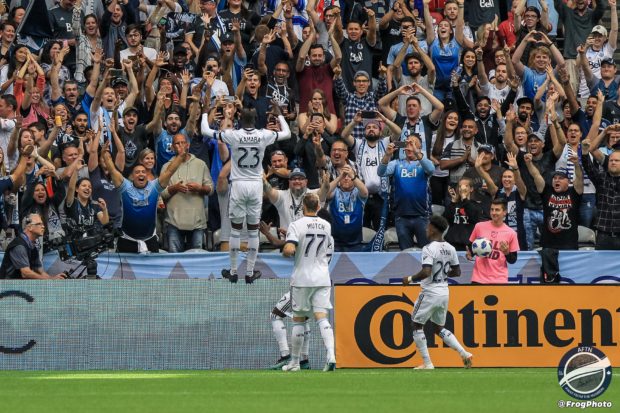 Even the most die hard of those of us who occupy the increasingly rarified air of the Optimists Union can begin to feel the strain of a maintaining a sunny disposition in the midst of an endless fog bank. I began this column a couple of years ago to share the joy of the experience off the pitch, and the truth is that my life as a supporter has almost always ensured that I’ve had a good time at Whitecaps games. If we have been dire on the pitch, we have at least sung and danced and carried on with joyful abandon in the stands because, really, what else are you going to do. And from time to time our support gets rewarded with a win, or a five goal night, or a national championship, or a late comeback or an irritated US National Team member, and the day is doubly good.

And so it was that there were two redeeming events on Sunday that saved even this weary optimist from a full on collapse after the surrealness of this season. Two things that reminded me again, and just in time, that support is deeply meaningful, beyond singing for the team and the players. That it matters to do it well.

My pre-match meal at The Blarney Stone, by sheer coincidence, had me and my beloved sharing a table with George Pakos and his family. George sidled into the Southsiders booth, warmly shook my hand and ordered some poutine and lager. We found ourselves sitting next to a legitimate Canadian legend.

We sat together for 90 minutes, regaled by his stories. George was the man who scored the goal in our country’s only away win in Honduras, a 1-0 victory in 1985. He then scored the first goal in the return fixture that took us to Mexico ’86. He was a pure amateur, playing club soccer in Victoria while he worked a day job as a water meter technician for the City of Victoria for 33 years. He was discovered by Tony Waiters playing for a Vancouver Island All Stars team in a friendly against the nation team. He had to ask for weeks of unpaid leave to play for Canada on the Olympic team and subsequently on the national team. The mayor of Victoria finally offered him paid leave to go the Finals in Mexico.

George is a guy who radiates joy. He may be the only soccer player I ever met who seems to have never inconvenienced himself with the awkwardness of pressure. He was a pure goalscorer with a good day job and despite a moment of bitter rejection when he was initially cut by Canada, he jumped at the chance to play when he was offered a spot for the injured Dale Mitchell and he never looked back. The stories fell from his mouth like rain.

Awesome to share a beer and some lunch with George Pakos, the guy who scored the goal against Honduras that qualified us for the 1986 World Cup Finals. #Legend #CanMNT pic.twitter.com/acbh9u9Vc2

He led the Southsiders march to the match and we got to sing one just for him before leaving Victory Square. The last I saw of him, he was standing on the pitch with 11 of his former national teammates drinking in the adulation and affection that 20,000 supporters were showering upon them and his smile was the widest of the bunch.

Something about being with George got my day off on the right foot, and after kickoff, the first half energy in the Southside was upbeat and positive. For whatever reason, it felt fun.

About 25 minutes into the first half a father and son wandered down the aisle by our section and stood beside us, watching the singing. I invited them into the GA and they joined immediately, with gusto. They didn’t speak English very well, but the son said they were from Syria by way of a refugee camp in Lebanon. The father pulled out his phone and FaceTimed his brother in Damascus as we danced the Nagila at the half hour mark. The brother was smiling and laughing at all the carrying on. The son was learning the chants, keeping the beat and living and dying with every Whitecaps shot and every Whitecaps miss. When Colorado scored before the half he moaned and held his face in his hands.

At half time, in broken sentences I learned from dad that they had been in Canada only six months. I couldn’t tell if this was their first ‘Caps match, but they knew football and they knew what it means to support. They never let up for the whole match; the son standing next to me clapping and dancing, dad wandering down the aisle to the front to quietly drink in the miracle of being here in BC Place.

When I tweeted this out later, my fellow supporter Mike Ward replied with this great line from Joe DiMaggio, who, when asked why he always put in his best effort, said:

“I have played many games, but it may be some fans’ first game and I want them to love the game as much as I do.”

Football is a game that toys with the heart, and there have been plenty of grey days in Whitecapsland lately. But if in the midst of working 33 years for a city water department, you got to score the most important goal in your country’s history, you’d tell the story like George does, with light in your eyes and a laugh at the end of every sentence. And if you ever get a chance to stand next to a refugee boy from Syria, absolutely drinking in the opportunity to watch a live football match with joy in his eyes, you might end up renewing your Optimists Union credentials too.