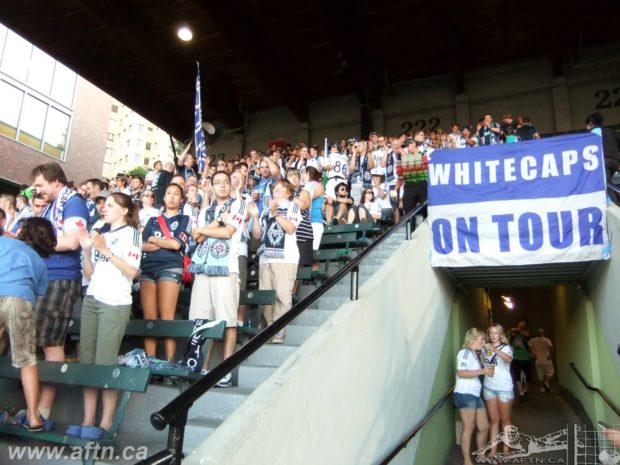 — Spirit of the West

On a Saturday afternoon in August 2014 I found myself standing on the Galata Bridge in Istanbul, part of a human chain of people, several of them friends and colleagues, linking arms that stretched, in broken clumps, up and down both sides of the Bosphorus. It was a day of action that spoke for peace between the continents of Europe and Asia, and that marked a year since the end of the Gezi Park protests of 2013 that nearly brought Turkey its own version of the Arab Spring.

Like many protests, It felt small, and useless beyond the good feeling you get when people take a bit of courage from one another to speak out in a country where doing so can be actually dangerous. It was indeed small until the Besiktas supporters – the Carsi – arrived a few hours before a match to join with the protests and lend all their energy and numbers to what we were doing.

When one of them found out I was a Canadian, he took the Besiktas shirt off his back, folded it up, kissed the badge and handed it to me and through a translator thanked me for standing with them. We parted and soon afterwards found ourselves dodging groups of people fleeing down from Taksim Square where the appearance of the Carsi had caused the police to get serious about dispersing the crowds. They were terrified of the supporters.

In 2013, one of the things that tipped the balance of the protests and made them threatening to the Erdogan regime was the united front put up by the supporters of the three big Istanbul clubs: Besiktas, Fenerbahçe and Galatasaray. Supporters from these clubs often engage in mass violence against each other. It makes the Cascadia rivalry seem like an Edwardian picnic.

So when the supporters of these clubs united against Erdogan, the government knew they were living on borrowed time. They upped the repression of the democratic movement and survived by the skin of their teeth. That remarkable phenomenon is documented in a great film called “Istanbul United.”. Needless to say I was deeply impressed by what I saw: football supporters effecting a social good in a country where political apathy ruled the day.

Football supporters groups are not necessarily political organizations, although many are, and they occupy the full political spectrum. Supporter culture and social change culture often overlap: singing, marching, carrying banners, making bold statements, defying authority. So it’s no surprise that people with activist backgrounds associate themselves with the rowdy ends of football stadia: a sport that has a global anti-racist campaign, that can be mastered by anyone with two skilled feet and one in which pride of club, town and country is evoked in song and celebration.

This is one of the reasons I belong to the Southsiders. While the Southsiders themselves are not a political group, we do participate in the global anti-racism campaign that is also supported by other groups in North America’s Independent Supporter’s Council, and we are explicitly inclusive, meaning anti-homophobic, anti-racist, and welcoming of all.

As a group we are also explicitly inclusive in our activities and this fact led the organization to take an important decision this week. Faced with the changing immigration policy landscape in the US, and given our principles of unity and inclusivity, the question was posed: What should we do about organized away trips if some of our members were unable to cross the border?

Some wanted to make a political statement to boycott the USA while others looked at the issue more pragmatically. We hashed it out on various social media platforms and then the Executive canvassed our opinions, sat down and made a decision that I feel strikes the right balance between living our collective principles, being pragmatic, and not constraining individuals.

US immigration policy is changing fast and unpredictably at the moment and for members of our group whose origins are in the countries that are affected by the new rules, crossing the border is a frightening proposition. Some of our members are actually now unable to cross the border because of the new rules. Others may be technically able to cross but in practice it’s too dodgy a proposition to try.

And so after a couple of hours of hashing it, out the Executive decided on a policy that suspended organized bus trips to the US this year. At the same time members were invited to make their own decisions about whether they would travel to the US to support the Whitecaps and the Executive respectfully asked anyone who did go not to wear their Southsiders scarves as a mark of respect for those who cannot go. It’s been a widely respected decision except from a few people who feel that we shouldn’t be “getting political.” Some of these people also use the word “Libtard” in general conversation, which speaks volumes about their debate credentials.

My experience in Turkey showed me the power in football supporters getting organized for social good. I personally don’t have a problem making statements that are in line with FIFA and Whitecaps policy – Refugees Welcome, for example – or pointing out ways in which opposing team’s supporters might become better citizens of the world, by waving Pride flags on goal kicks when playing Mexico.

In this new international landscape, it feels like every act is political: every little thing. Whether you do or do not, whether you react or respond, everything has the weight of politics on it. When you are committed to a principle of inclusiveness in a world that is increasingly divided perhaps an act of unity and support is a political one. When your local derby takes you to a country under arbitrarily changing immigration policies, these issues become real. I for one am proud of the decision the Executive took. It’s easy to have ideals, much harder to act on them, and harder still to get it right.