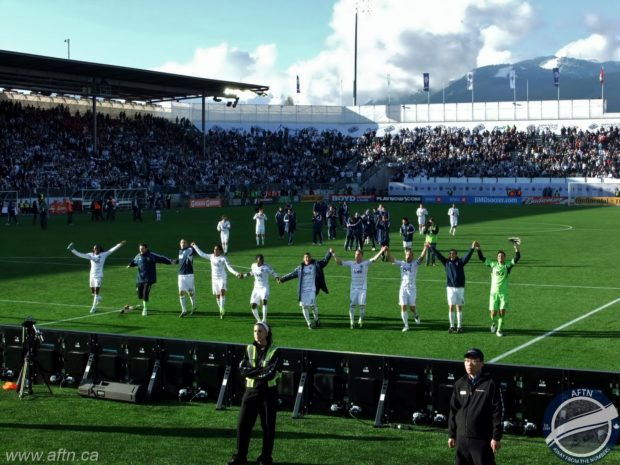 The Whitecaps were on a gentle slide off a big peak the year they joined MLS. The last USL Cup win was in 2008, when we finished second in the league, one point behind Puerto Rico, who we beat at home in a 2-1 final to win the Championship. We made the USL playoffs in 2009 but fell to the Impact 5-4 on aggregate over the two leg final. This was the same year the Impact handed the Voyageurs Cup to Toronto in a shockingly unsporting result that even the Impact Ultras protested.

In 2010, the year we drew 15 of 30 matches, we again bowed out of the playoffs, losing to Puerto Rico after they scored two extra time goals in the away leg.

We were on a downward trajectory, while taking a big step up into MLS. The first season was not going to result in league or playoff success, but we had a team of heart-filled competitors and fan favourites like Eric Hassli and Wes Knight and Jay Nolly and Gershon Koffie.

There were dire results, but reviewing one of my all time favourite videos reminds me that the team had me jumping from my seat many times that year. Despite the off-field antics of Teitur Thordarson’s firing (which Bobby Lenarduzzi admitted on Wednesday on TSN 1040 that the club got wrong) and weirdnesses with ticketing at BC Place, we had a glorious summer at Empire Field, enjoying the promise of what was to come.,br>

Through 2015, everything was looking up. Our team kept getting better and better and we kept notching new benchmarks: in playoff depth, points in a season, wins. That year would prove to be our deepest playoff run and our one successful Voyageurs Cup victory, but the wheels came off in August. Away at Kansas City, Kekutah Manneh scored two and Pedro Morales scored one, but we couldn’t hold a 3-1 lead and SKC stormed back to win 4-3 on the last kick of the game. We were never the same after that.

We finished the season in second in the Western Conference but were bundled out by the Timbers in the conference semi-final. We drew 0-0 in Portland and then lost 2-0 at home. They went on to win the MLS Cup, and we waited two more years to have a sniff at the playoffs again. 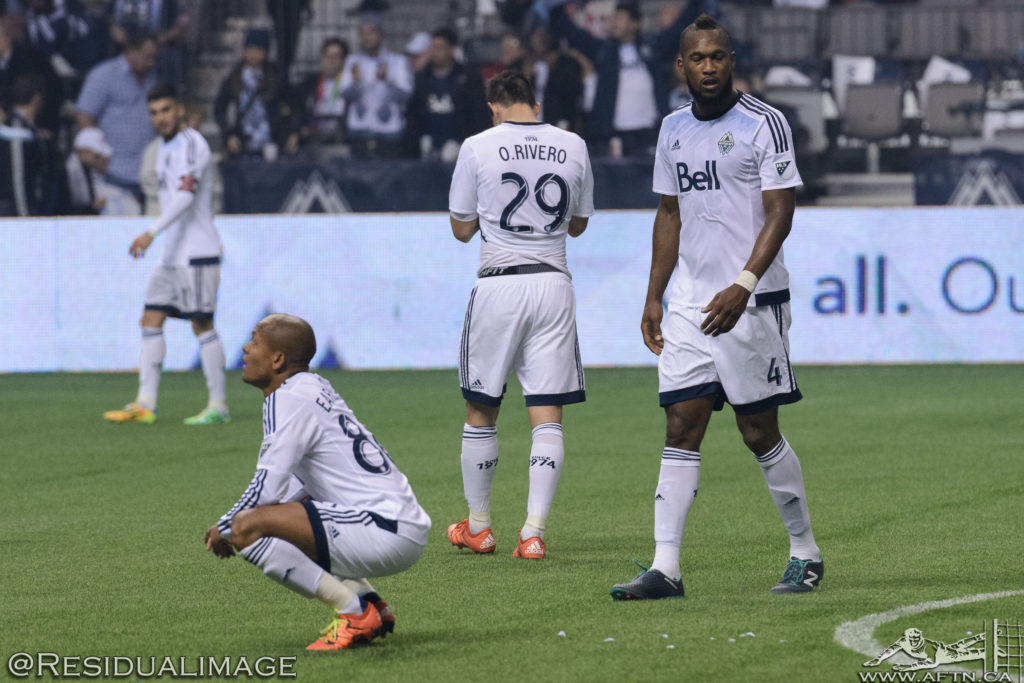 I recap this history, because supporting your team is a long term affair, and even though there are many people that come and go with the wins and losses, there are thousands that stay on year after year watching, hoping, and waiting. In fact taking the long view is partly a qualification for entrance into the #OptimistsUnion because it somewhat tempers the tendency towards excited shitlarking that comes with a string of poor results, or a manager that chooses to play eye-waveringly boring football, or teams that keep letting us down in big games. This too shall pass.

On Saturday I was stood next to Sarah Cooke, a Grimsby Town supporter who joined us for the match. She reminded me that Grimsby Town Football Club is celebrating its 140th birthday this year. That club is 26 years older than the City of Vancouver. Recently they’ve been struggling against relegation from League Two, and have emerged this season to have another crack in that division, narrowly missing another devastating drop to non-league football again. She gets it.

Two weeks ago I was in Portland, not for the football, but for my anniversary, and I was reminded again what it looks like when a city loves it’s team. I think people in Portland just relish everything about their city, to be honest, in all its eccentricities and eclecticism, and that spills over to support. And it’s not just the Timbers Army. A vast majority of the people that go to Timbers matches look like they should be standing with the TA, and on game day, the west side of Portland is buzzing with green and gold from the moment the farmer’s market opens to last call.

Here in Vancouver, we’re not as lucky to have a city that everyone so easily loves or a team that has played in front of six generations of supporters. This is a hard place to live for a lot of people at the moment and our population is very transient. Generating civic pride is not easy, although you see it in certain neighbourhoods, and it seems like the East Side is always fierce. But since I moved here in 1994, I’ve seen Vancouver go from a city of participating to one of consuming, and that kind of attitude has long been a part of the sports scene here. Talk radio basically sells ads by yelling at the Canucks non-stop.

In 2011 the whole Whitecaps organization gave us a team we could love. They had 37 years of goodwill and civic pride to build on, but I always felt that the best thing they did, especially the way they opened the season, was create an instant love affair with the team. Eight years later, it feels like we’re at a nadir in that respect. There is lots of choppiness, pettiness, short tempers, and frustrations. Narratives are flying apart into shards. For many, they have finally given up their season’s tickets. Those of us that have two have dropped down to one. It’s withering away. A reset now seems inevitable.

Making the playoffs would be a remarkable bonus now, but I believe the relationship needs to be reset between the team and the city. Coming into this season, the club and the supporters groups did a lot to improve things with each other, but various events this season have stalled that momentum. What is needed now is another 30 day countdown campaign like we had in 2011, a new promise for a new era and one for the whole city. A reset of relationships that gives the city something to celebrate, be proud of, throw passion behind.

I hope it’s coming. The core of the supporters groups are tired and burning out. We need new management, a new philosophy, and a bold commitment to actual unity, around the club, the players, and the city.

What can we do to stoke the pride? What are the ideas that no one knows about yet? Whither our direction now?