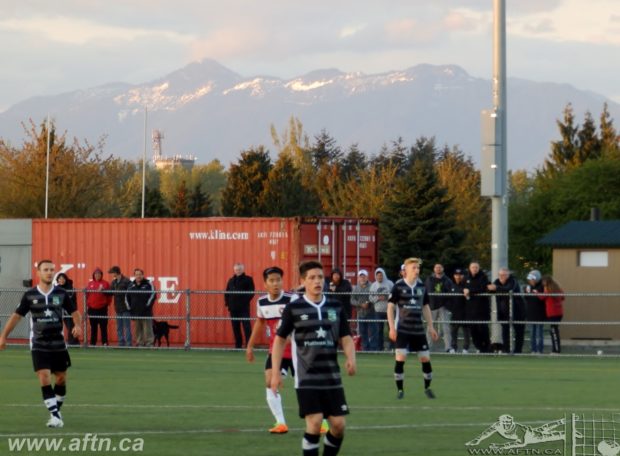 After being dominated in recent years by their Vancouver Metro Soccer League (VMSL) counterparts, a Fraser Valley Soccer League (FVSL) side has advanced to the BC Provincial A Cup final for the first time this century.

FVSL champions Aldergrove United are out to make history this Sunday when they will look to become the first team from the league to lift the trophy in the competition’s 95-year history. Standing in their way are VMSL mid-table side Club Inter.

On paper and form, Aldergrove head into Sunday’s final as clear favourites, but Inter have got this far before and have an organised side that may not be the flashiest around, but they work as a team to get the job done when they need it most. It should be a cracker.

AFTN was at both semi-finals over the weekend and they were two closely contested matches that had the outcomes hanging in the balance right till the end.

Club Inter reached their second A Cup final in three years with a hard fought 2-1 win at Langley United on Friday night. 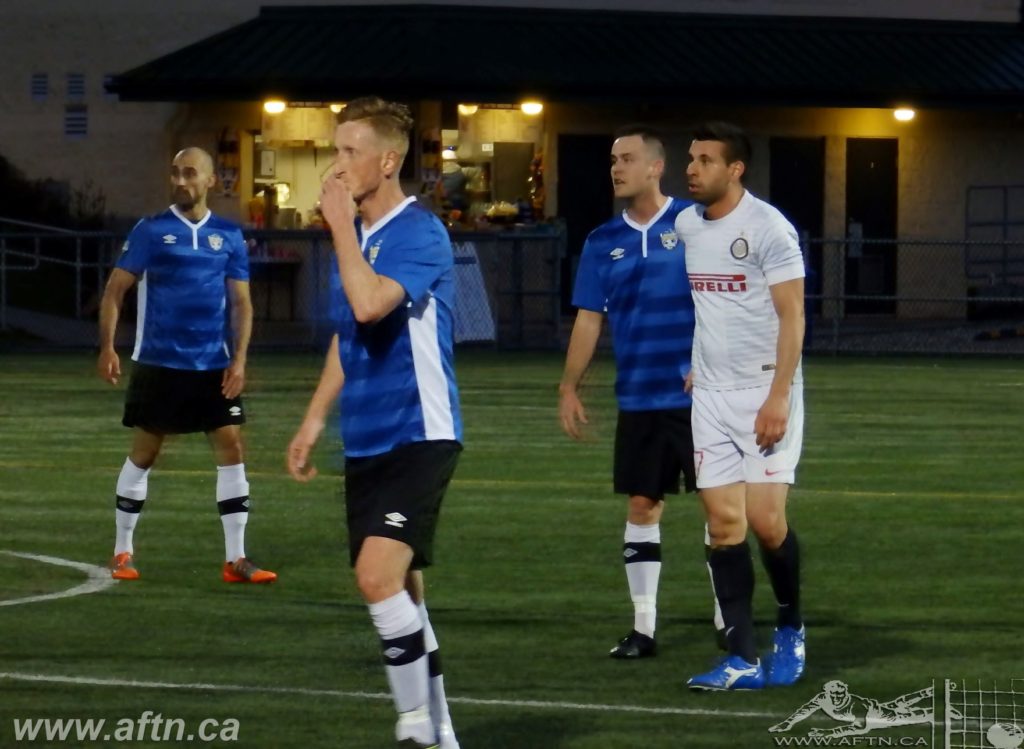 Inter started the stronger of the two teams, taking the game to their hosts and looking the more dangerous side for the first 20 minutes. They created a couple of chances, with a shot missing wide left and a header from close range from a corner that flew over.

Then Langley started to take over, with Mike Perry whipping a shot from distance past the left post in the 22nd minute.

Inter were giving up a crazy number of free kicks, as the game became very stop and start, and were very fortunate not to be punished from them. Langley kept whipping dangerous long balls into the back post, but no-one was able to get on the end of them.

With the game in first half stoppage time, Inter opened the scoring against the run of play, when the ball broke to Milad Rahmati in the box and he drilled a low shot into the bottom left hand corner. A clinical finish from a game that was needing one.

It already looked to be an uphill battle for the FVSL side and their job was made even tougher when Inter doubled their lead six minutes into the second half after some fantastic individual play from leading scorer Milad Mehrabi.

In a move that started with breaking up a Langley attack on the edge of their box, Inter got the ball quickly out to Mehrabi who hit the wing, cut inside, and saw his first shot blocked before pouncing on the rebound as it broke free and burying a shot past United keeper Colton Keam.

It was a great move, and a great finish, but not without a little controversy with the Langley players appealing for an offside decision after the linesman’s flag went up in error as Mehrabi was the only Inter player to touch the ball after the rebound.

The goal fired up the home side and they applied some more pressure, but the Inter defence was holding firm, and getting a couple of breakaway chances of their own that they were unable to capitalise on.

Langley finally got their breakthrough in the 69th minute when Perry produced a brilliant header from ten yards out to finish off a nice move up the left. 2-1 and game on.

That set up a barnstorming final, as Langley tried to throw everything at Inter but the VMSL team were holding on fairly comfortably. Inter nearly grabbed a third in stoppage time when Langley piled everyone forward, including keeper Keam, leaving an empty goal for an Inter break, but Tyron Ehiwe could only look on as his shot from the halfway line headed toward the net but was cleared off the line but a last ditch desperate defender.

And that was it. Inter were the better, more clinical on the night and earned their place in this Sunday’s A Cup final, as they look to win the trophy for the first time in their 27 year history.

You can see our video highlights from the match (or at least what we managed to capture with our shitty night capturing camera and slow response speed!) in the video below. Not our best effort, but still better than nothing!

No matter how Sunday’s final turns out, there’s going to be a new name on the trophy, and that’s always pleasing.

Club Inter will be looking to uphold VMSL’s record of winning the A Cup these past six seasons. Facing them will be a very talented young Aldergrove United side, who are not only looking to lift the trophy for the first time themselves, but are aiming to become the first FVSL team to ever win the A Cup.

No pressure then on the FVSL Premier champions! But they have a great chance to do it.

Aldergrove came through a battle at home to VMSL team Westside SC on Saturday night, impressing in their 3-1 victory in front of several hundred supporters in what was an absolute cracker of a match. 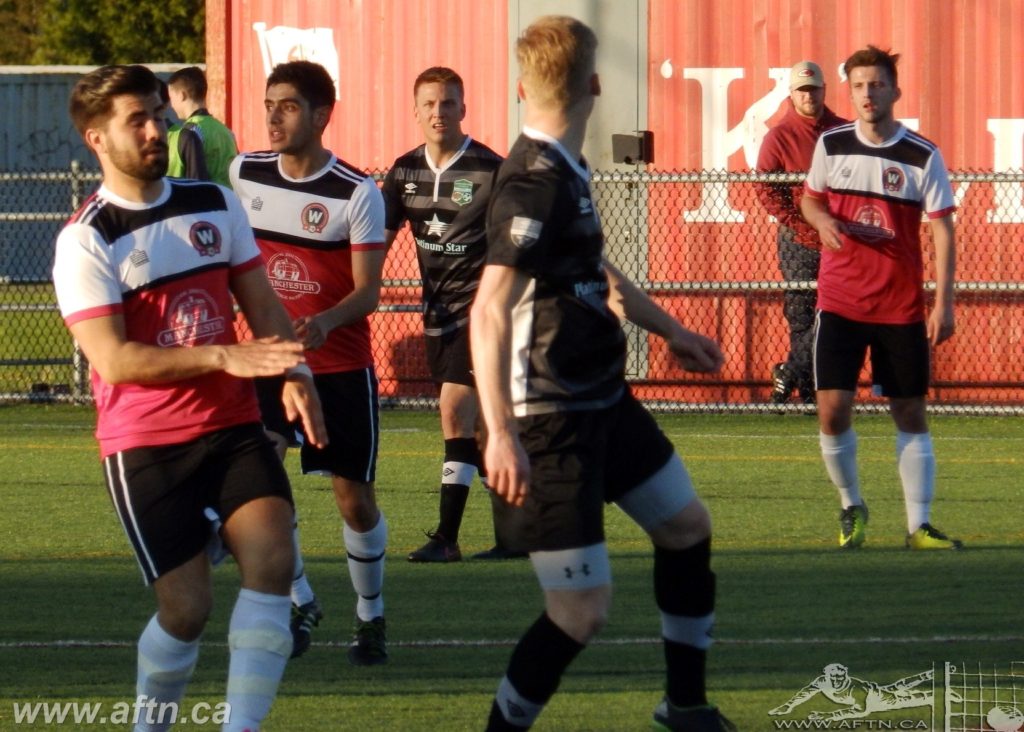 The action started thick and fast, with both teams having chances in the opening minutes, with both keepers making standing tall and making saves, as the game went from end to end.

The home side were pressing hard and they got the breakthrough their play deserved in the 15th minute. Brett Wiens, who was a constant menace to the Westside defence throughout the match, got the ball out right, cutting into the box and past three defenders before burying one into the far corner to give Aldergrove the 1-0 lead.

The game continued to go back and forth and Connor Guilherne got on the end of a corner four minutes later, but drilled his shot past the right post as Westside looked for the equaliser.

Aldergrove came within inches of doubling their lead in the 23rd minute, when Ben Vandergoes sent a free kick deep into the Westside box and it crashed off the crossbar and away.

It was all Aldergrove in this spell and they came close to adding to their tally, first with a goalmouth scramble that Westside keeper Lukas Strauts eventually smothered, and then Strauts came up with a big diving save to turn away a curling free kick from Connor Hildebrandt in the 29th minute.

Aldergrove kept pressing, with Wiens flashing a shot wide just before half time, but with no further scoring, and despite their pressure, the home side only had a one goal lead to show for it at the break.

The action kept up apace at the start of the second half with both teams exchanging chances. Aldergrove still looked the more dangerous side, but the home crowd was stunned when Westside tied it up at 1-1 in the 57th minute.

It was a great passing counter stemming from breaking up an Aldergrove attack on the edge of the Westside box and ended with Zach Karmel rising unchallenged to head home a pinpoint cross.

Aldergrove nearly restored their lead from the restart but Strauts denied Josh Brown with a leg save.

The home side appeared to be in the ascendency and were pressing hard, but Westside came close to taking the lead in the 71st minute, again on a quick counter from an Aldergrove attack. This time it ended with Brian Im firing narrowly past the left post, but the threat the VMSLers posed was clear, no matter how much pressure Aldergrove were enjoying.

Aldergrove responded immediately and Wiens nearly poked one past Strauts from close in after good work by Gavin Deacon in the box, and the enjoyable battle between the keeper and the big striker continued moments later when Strauts saved Wiens low cross at the feet of two attackers.

Strauts came up big again to deny Hildebrandt with a good low save before the game’s decisive moment came in the 84th minute.

Westside’s Alejandro Caselblanco gave away a free kick around 35 yards from goal on a tackle that saw him pick up a second yellow card, reducing the visitor’s to ten men with extra time seemingly looming. And as hard as that dismissal was set to make the rest of the game for Westside, they were immediately punished for it when Aldergrove retook the lead from the subsequent free kick.

As the ball was played in, the Westside defence blocked two shots, but the ball eventually broke to Ko Ota eight yards out and he fired home to send Aldergrove Athletic Park into raptures.

Westside tried to get numbers forward as they looked for the equaliser, but it was leaving them short at the back and Aldergrove tried to capitalise to kill the tie off, with Strauts doing enough to put off Wiens on a quick breakaway.

Deep into stoppage time, Aldergrove countered again and Hildebrandt played a one-two with Wiens before showing great composure in the box and curling home the killer third, securing a famous 3-1 victory for the FVSL side in what was a thoroughly enjoyable and entertaining encounter.

You can see our extended highlights from the match, including all the goals, below.

Sunday’s final should be a cracker. Kick off is 3pm at Burnaby Lake.