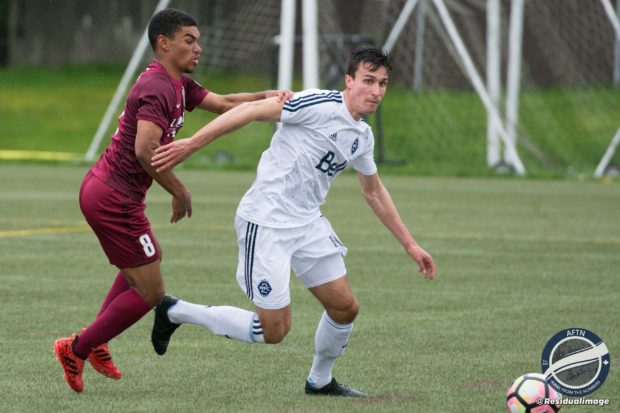 There’s a lot of talent in CIS soccer (or U Sports now to give it it’s new-fangled name that nobody thinks of it by). But it’s an often overlooked talent to when it comes to professional teams in North America.

There’s no doubting that the path to the pros is a much tougher one for Canadians going to a Canadian school. No matter how talented Cyle Larin is, there’s no way he’d have been the number one pick in the 2015 MLS SuperDraft if the Brampton boy had been lighting it up for Ryerson instead of the University of Connecticut.

The new Canadian Premier League will undoubtedly change that. Opportunities will now exist for a number of these talented Canadian college players. It’s long overdue and a number of great players have slipped through cracks in recent years and been lost to the professional game.

A few make it through. Brett Levis is certainly one success story, going from playing with the University of Saskatchewan Huskies to WFC2 in the USL and now on to the Whitecaps MLS squad, making his league debut in the last game of 2016.

The University of Calgary Dinos standout signed his first professional deal with WFC2 in March. It’s been a long road travelled for the 22-year-old centre back, but it’s all been worth it.

“It was a dream come true,” Zator told AFTN. “To finally be able to play at this level and sign a pro deal, it’s everything I wanted. To be able to come out and have my first games under my belt now, it’s just a great time.”

Zator played 68 matches for the Dinos in his five years at Calgary. His athletic presence and tactical awareness saw him stand out from the crowd. As did his goal threat and attacking capabilities. He scored six goals and contributed 15 assists during his college career, with an amazing Canada West leading 11 of those coming in his final season.

That’s some impressive numbers for a centre back, and something to catch the eye of potential suitors. But going to a Canadian school, was there ever a worry that he may find himself overlooked by clubs?

“I feel like there are a ton of great players. The quality’s really high in CIS. It definitely does kind of suck for a lot of the players now being able to be looked at for pro deals as well. Hopefully through myself and some of the other players who have got the opportunity at making pro through CIS, it’s able to open up the doors for other players coming through the CIS and hopefully make the CIS look a little bit more prestigious I guess.” 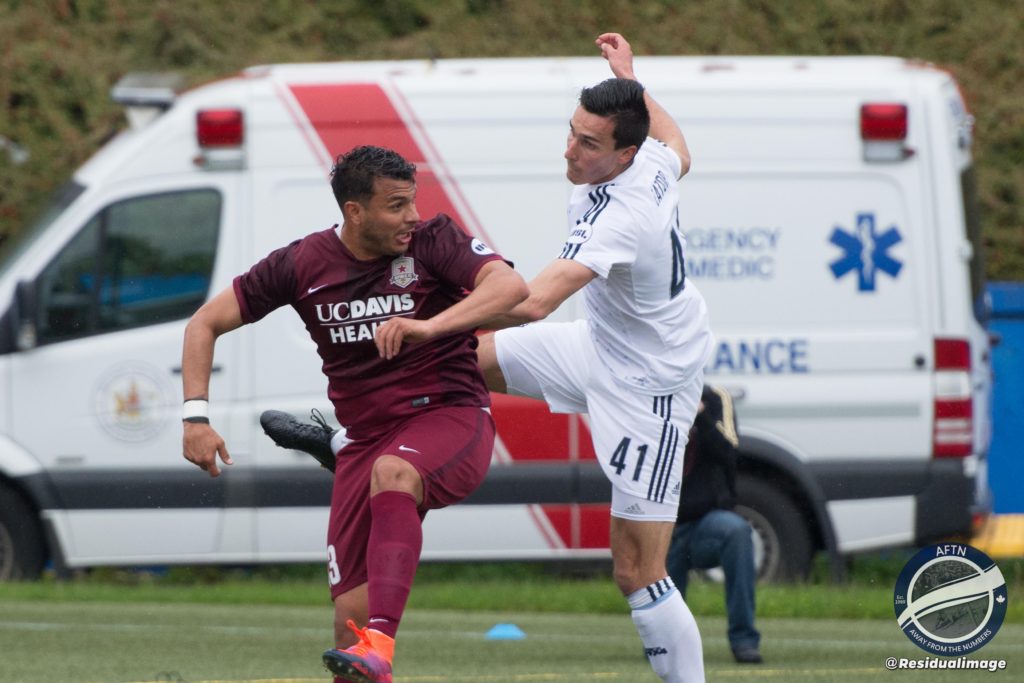 As Zator says, playing in the PDL certainly helps you get noticed. Of the players selected in this year’s MLS SuperDraft, 73% of them had previous PDL experience.

Zator played the last two seasons with Calgary Foothills, making 27 appearances and scoring two goals, one of which was the match winner in last year’s Western Conference final to take the club to the PDL Championship game.

Foothills went on to lose a late heartbreaker to Michigan Bucks, but their unexpected run to that Championship game will always hold a something special place in the heart of Calgary native Zator.

“Winning each one of those games, knowing we made it that far with such a small group. It was only our second season in the PDL too, so being able to prove so many people wrong, I thought that was one of the best things.”

It Zator wasn’t already on the Whitecaps radar for his college play, his performances with Foothills in the PDL certainly caught their attention. So when did he first know that the ‘Caps were interested in him?

“I was talking with Tommy Wheeldon Jr, the Foothills PDL coach,” Zator told us. “He was talking to me about the Whitecaps after the season ended, but then more so more interest came in at the start of the new year. Then I hear there’s interest with a couple of other players.

“So then he was able to put my name forward and tell them to come and look at me for a bit. At the start of the new year the coach was able to talk with the Whitecaps and say that I had potential and just to have a look at me for a couple of trials and then everything kind of worked out.” 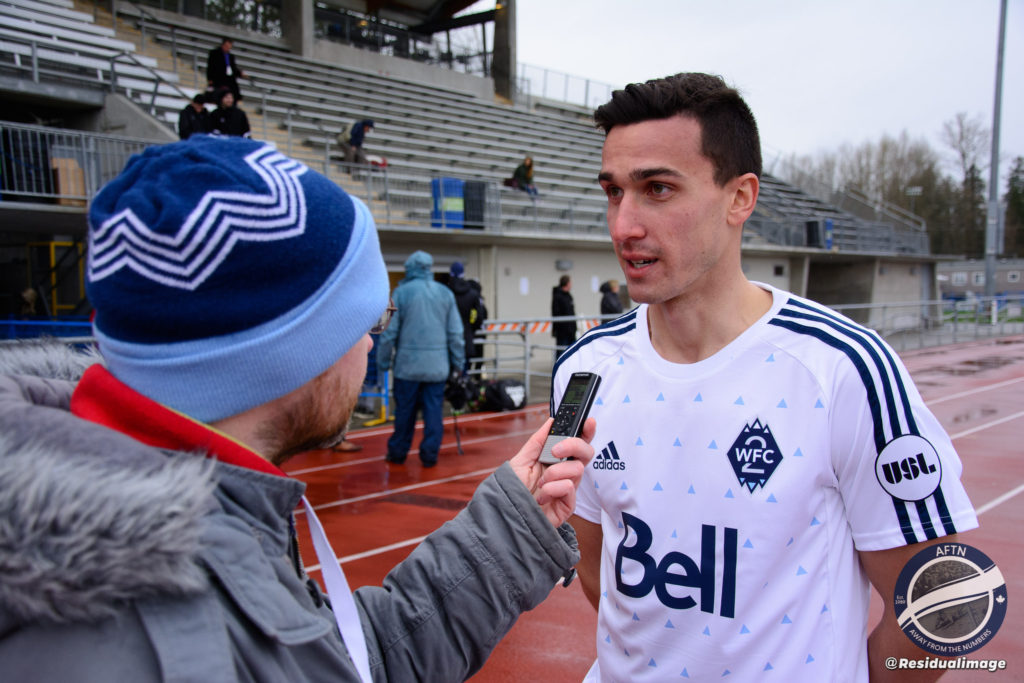 As Zator said, turning pro was the culmination of a long sought after dream. It was one he’d have been keen to pursue overseas if the ‘Caps hadn’t come a calling, and the big defender went over to England in February 2016 for some trials with Oxford United.

It was mostly to see where the land lay and how he’d cut it in a pro environment, and it reaffirmed what he was striving to achieve.

“For the most part, I wanted to go pro,” Zator said. “Just being young and ambitious, being able to go pro was a goal I’ve always wanted to have. It was my dream. That was my priority. To be able to do it through school and have a degree under my belt, just as a fall back plan, that’s what I wanted.

“That’s why I went through all these trials and stuff. Trying to reach it. I was just trying to see what my potential is. Now that I’ve been able to achieve it, I’m flying high now I guess. It’s been working out.”

But he’s realistic enough to know the hard work is only just starting for him.

Zator heads to a club with a lot of talented centre backs on both their MLS and USL squads, even if keeping them all healthy and unsuspended can be a problem at times.

Minutes were expected to be at a premium this first season when you have the likes of Sem de Wit and Francis de Vries pushing for MLS deals, and Cole Seiler dropping down from the first team. But injuries, circumstance, and a change in formation to three centre backs for some matches, have all helped Zator get on the pitch early on in his ‘Caps career.

Zator has now made three appearances for WFC2 this season, playing 248 minutes, and helping the team to two clean sheets. He feels he’s made the adjustment to the league well and is fitting in just fine.

“The nerves were there and kicking in a bit at the start,” Zator admitted. “But once I was able to get a couple of touches on the ball and settle in, I felt comfortable out there. The guys made it quite easy for me.”

And his hopes for the season are simple.

“I’d like to see the field and get some minutes, as well as see the team do well again,” Zator said. “It’s always great to be part of a team that goes far. The atmosphere’s way better out there, so I’m just looking forward to help the team out as much as I can and then hopefully we can go on another good run like they did last year.”