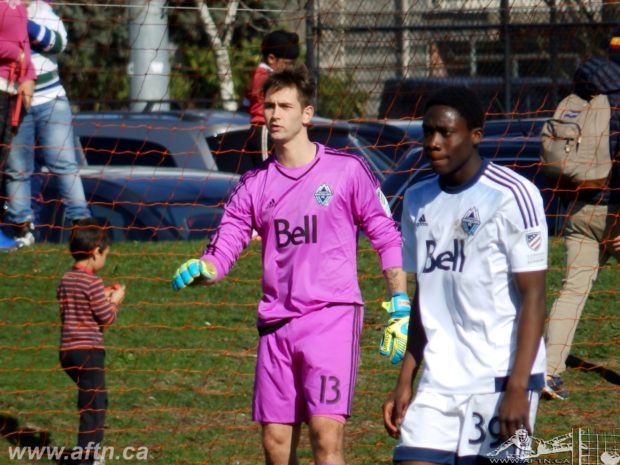 Goalkeepers. They’re a breed apart. A little bit crazy, let’s be honest here! A fingertip can be the difference between them being the game’s hero or villain. Last season, Andrew Hicks was the TSS Rovers hero time and time again. The big stopper kept the Rovers in so many matches and helped win them a lot of points. He was rightly named the club’s and the supporters’ Player of the Year.

Hicks played every minute, of every league game last season. He made the number one spot clearly his own and he’s back this year to try and do the same again. This season though, he has a new challenger to his throne, Vancouver Whitecap Residency alumni Luciano Trasolini.

Trasolini spent eight seasons in the Vancouver Whitecaps system before heading off to college with the Barton Cougars in Kansas last fall. That was a stopgap to get his grades up the levels they needed to be to get into a top school. Now he’s back in BC and heading to play for the SFU Clan this fall.

Before that though Trasolini is getting set to undertake his first PDL season with TSS Rovers and he’s hungry to make that number one jersey his own.

“He’s super motivated,” TSS Rovers head coach Colin Elmes told AFTN. “Coming back to town, I think he’s going to challenge Andrew [Hicks]. He’s fully aware of the fact that our Player of the Year is in goal from last season and at the start line in front of him, but I know he’s going to work his tail off to make sure he’s the one standing in front of us when we make game selections, so we’re excited about that.”

Competition for places is healthy and is what every club needs, and Trasolini is used to it after years of battling and splitting minutes in the Whitecaps Residency program.

The Burnaby native’s time with the Whitecaps dates back to 2008 when he was part of their Prospects program under Bart Choufour. Officially joining the Residency program in September 2011, Trasolini was a key piece in the success of the ‘Caps teams in the USSDA these past few seasons, making 33 appearances for the U16s in the 2013/14 and 2014/15 seasons and 20 for the U18s in 2015/16.

He also tallied a goal in that season with the U18s and was part of the squad that made it to the 2016 USSDA U18 Championship game, along with a string of playoff appearances with the U16s before that. 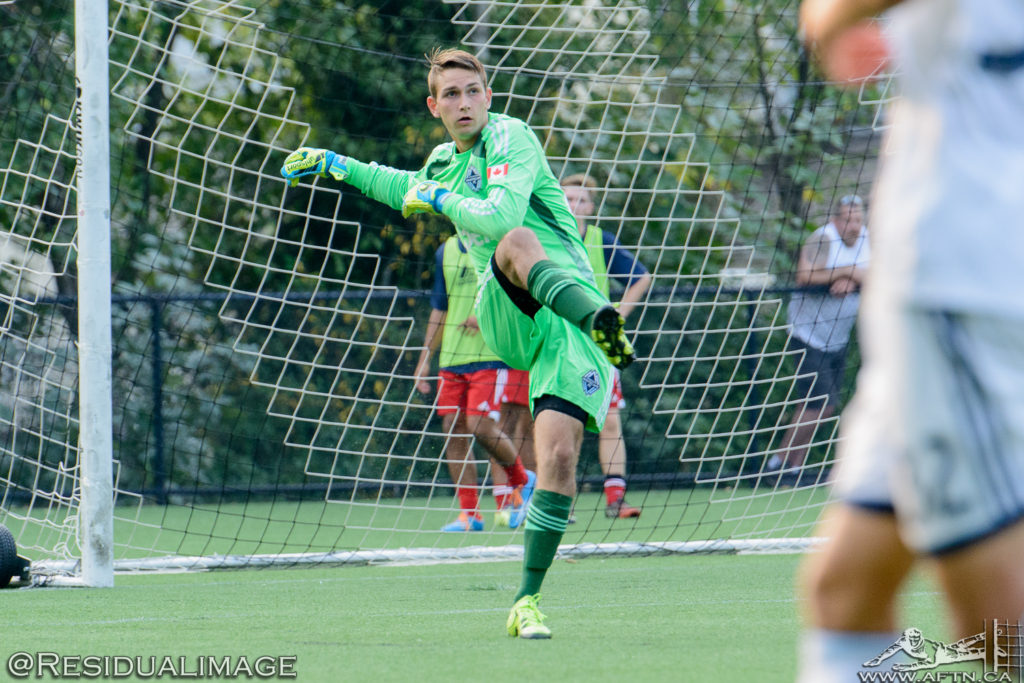 His play with the Whitecaps saw him called up to the Canadian national team at U17 level, where he played six matches at the 2015 CONCACAF U17 Championship in Honduras.

Trasolini graduated from the Whitecaps in 2016. He could have stayed another season but he decided to head to college, committing to Cal Poly in the NCAA Big West Conference, but there was a snag. His grades weren’t good enough to get him, so he took a year off, played in the VMSL with Croatia SC, then got himself into Barton Community College in Great Bend, Kansas to kickstart his college career and work on getting his academic average to the level needed.

He did both, earning a 4.0 grade point average in the classroom and making 17 appearances, all of them starts, for the Cougars in the National Junior College Athletic Association (NJCAA). The Cougars won 13 of those matches with Trasolini in goal, losing just three, and the former ‘Caps keeper recorded five clean sheets during the regular season and gave up 19 goals (for a goals against average of just 1.09) in his 1569 minutes played.

His performance both on and off the pitch meant he could finally head to Simon Fraser University and play for the Clan, and that’s exactly what he’ll be doing come the fall, much to the delight of his new head coach.

“Luciano came from the highly recognized Whitecaps youth program, a place where we have gotten many big-time impact players from,” Clan coach Clint Schneider said after announcing Trasolini as part of the SFU program. “He is a special player and we are expecting big things from him. Bringing him into our program gives us a plyer that can be a number-one goalkeeper. It will be up to him to compete with and challenge the other keepers for that spot in the starting lineup.”

The Clan saw their starting goalkeeper Miguel Hof graduate this year, leaving them with two sophomores and a freshman on their squad for the coming season. Trasolini has a great chance of becoming an immediate starter and he’s hoping to show Schneider why in the PDL this summer with TSS. 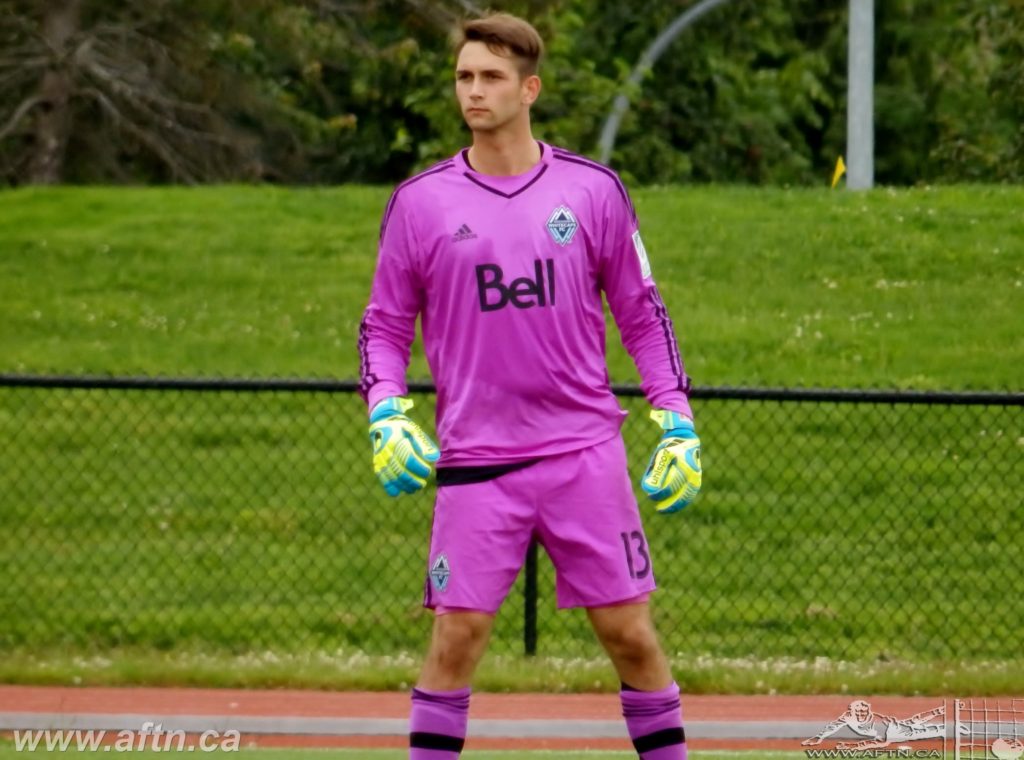 The Rovers are delighted to have Trasolini on board and he’s a keeper who perfectly fits the kind of game TSS ideally like to play.

“Luciano is clearly a national team level player in our country,” Elmes told us. “One of the things that certainly attracted us to him is that he is very, very good with his feet. Anybody that’s watched our youth programming knows that we’re not shy about going back to our goalkeeper.

“Not just because we have to, but because we want to. From what I’ve seen, Luciano is like another centre back for us once we’ve advanced the ball up the field.”

If you haven’t already got your season tickets to see Luciano and the others play, what are you waiting for?! Eight matches (seven league and one friendly) for only $70 for adults and $49 for children, it’s the best value soccer you’ll find in the lower mainland. Get them HERE and if you can’t make it along to every match, the club have a donate a ticket scheme where you can help someone who can’t afford a ticket make it out to a game.