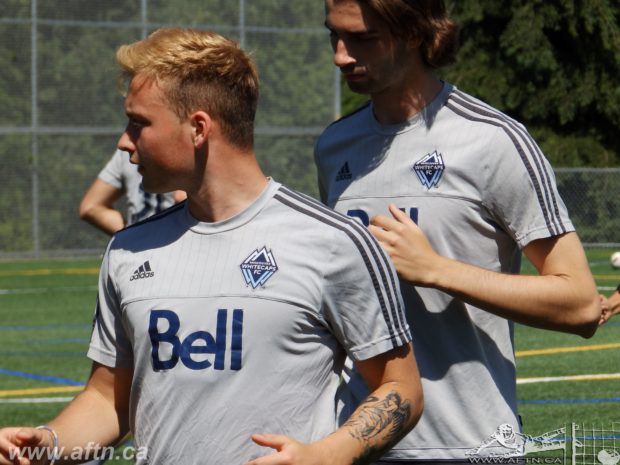 Patrick Izett is coming home in a lot of ways.

After training with the TSS academy for three years in his youth career, and having a couple of spells with Vancouver Whitecaps’ Residency program, Izett is back with TSS and all set to play a part in their debut PDL season this summer.

Izett first joined the Whitecaps Residency program in 2011 as part of their pre-Residency squad, after captaining Delta Selects U13 and U14 sides during the 2009/10 and 2010/11 season.

The forward played a single game for the U16s that first season before moving on from the program to join and captain Fusion FC U18s and playing on the BC Provincial team at U13 and U14 levels.

Returning to the ‘Caps for some U16 games during the 2013/14 season, Izett was injured for his whole Grade 12 year before heading to New Zealand for a training stint with Wellington Phoenix. Coming back to the ‘Caps fold last season, playing 14 matches for the U18s (starting four of them) on their way to the 2016 USSDA U18 Championship game. He was key contributor to the team, hitting five goals in the process.

Izett graduated from the Whitecaps Residency program last summer, most recently heading to Europe where he spent a little time with Scottish Premier side Partick Thistle before heading back to BC to play for TSS FC Rovers this summer in the PDL.

Born in Nanaimo, but moving to Delta, BC at an early age, Izett has represented New Zealand at U20 level after qualifying to play for the All Whites through his parents. He missed out on the ‘Caps USSDA championship game last summer against Dallas after being called up to a New Zealand U20 camp.

Izett is a striker who knows his way to goal. He’ll be joining UBC Thunderbirds in the fall, so a PDL season with TSS should see him hit his first college season in excellent form. And he’s already won a trophy at TSS!

You can see Patrick and the rest of the TSS Rovers squad at Swangard Stadium this summer. The Rovers home opener is on Friday May 12th against Lane United. Season tickets cost only $70 for seven PDL matches and a marquee friendly. If you haven’t got yours already, then click HERE to get your season or individual tickets. #SupportLocalSoccer