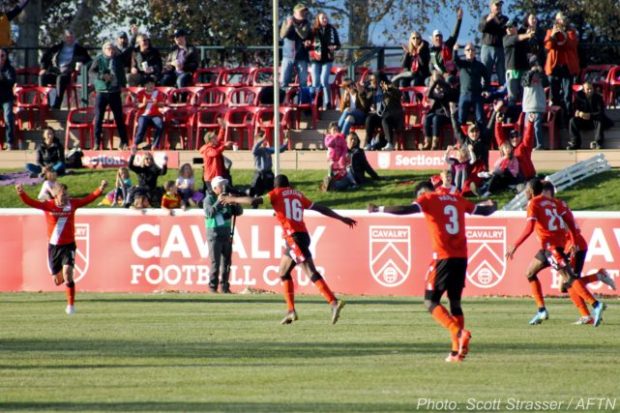 “It wasn’t our best [game], but it shows a sign of a good team when you play just OK and still come away with a clean sheet and three points,” said Cavalry FC head coach/general manager Wheeldon Jr.

After a scoreless first half that rendered just a single shot on target, Adekugbe broke the deadlock for Cavalry in the 72nd minute. The midfielder struck a low shot that deflected into the bottom right corner from outside the box following a Cavalry corner kick.

“I was a bit taken back by it – I didn’t expect it,” the 23-year-old said. “But it’s a good feeling. I don’t score too often, so it was a bit surprising and I didn’t know how to celebrate it, but I was happy about it and glad the team won.”

A miserable afternoon for HFX goalkeeper Jan Michael Williams ended early after he was sent off for a mistimed challenge on Cavs striker Aribim Pepple, who was through on goal, in the last 10 minutes of the match. That prompted the introduction into the game of Halifax’s backup ‘keeper, Christian Oxner.

Up a man, Cavalry poured players forward, and their attacking efforts paid off with a second goal in the 85th minute. Julian Büscher, who had been subbed into the game during the second half, played a corner kick to the back post, where Waterman was waiting. The B.C. native made no mistake, deftly lobbing the ball over Oxner in the Halifax goal. 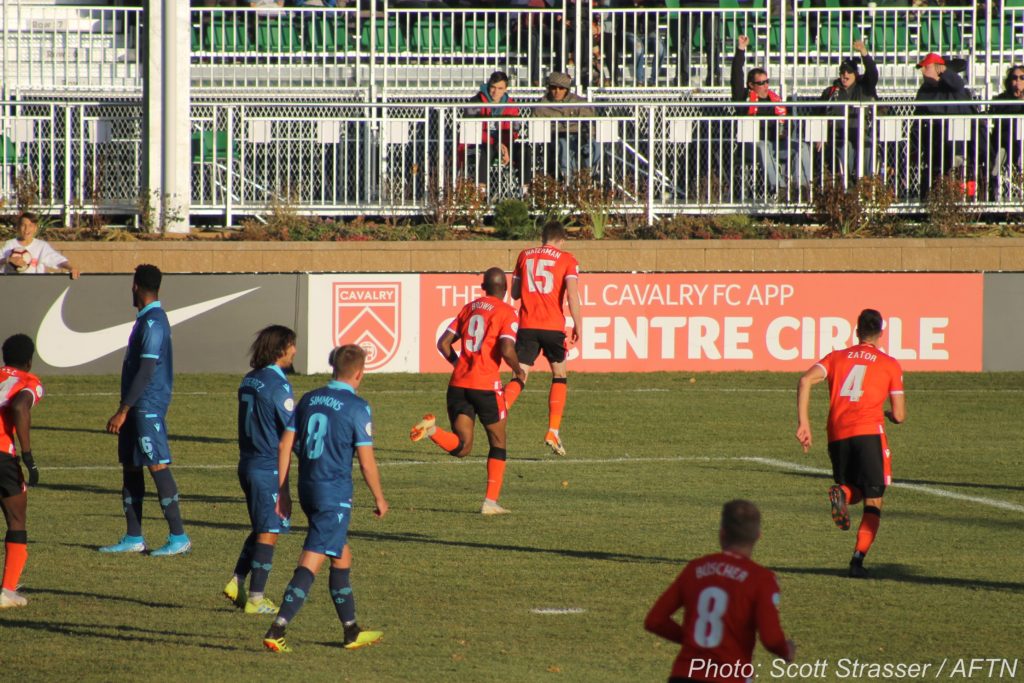 Despite securing the three points, Adekugbe said after the match the home team wasn’t at its best, against a Halifax side that has won just two games during the Canadian Premier League’s fall season.

“We got the result, and we’re happy about that, but there are a lot of things we could have been better at – some moments in possession and our quality with the ball,” he said.

“But at the end of the day, sometimes you just have to take the three points and grind it out.”

HFX is on a poor run of form at the moment, without a win in their last eight matches. The Wanderers currently occupy the bottom of the fall season table, with just 13 points and 10 goals scored after 16 matches.

At the other end of the table, the win temporarily vaults Cavalry back into the top spot, with a 9-1-5 record. The spring season champs have just three fixtures left in the regular season – two against Forge FC on Oct. 9 and 16 – before a final Battle of Alberta with FC Edmonton on Oct. 19. 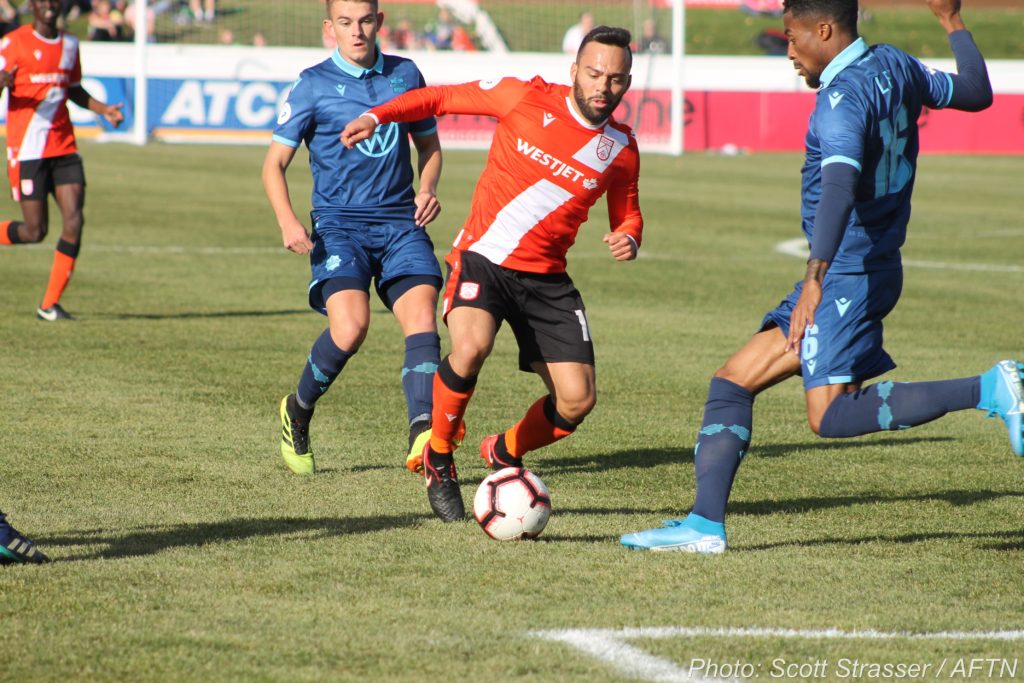 Following a 10-week injury lay-off, Sergio Camargo got his first start for Cavalry since July.

“We’ve already picked our next three line-ups,” Wheeldon Jr. said. “We knew what we were going to do today and we know what we’re going to do in the next three games, barring any suspensions, and we’ll see how it plays out in the finals.”

Following the regular season’s conclusion on Oct. 19, Cavalry will contest for the inaugural CPL championship against Forge FC in a two-legged series on Oct. 26 and Nov. 2.

“We’ve said all along that we want to win the fall season as well as the spring,” Wheeldon Jr. said. “Those goals don’t change. We see the CPL finals as another trophy or achievement to unlock.” 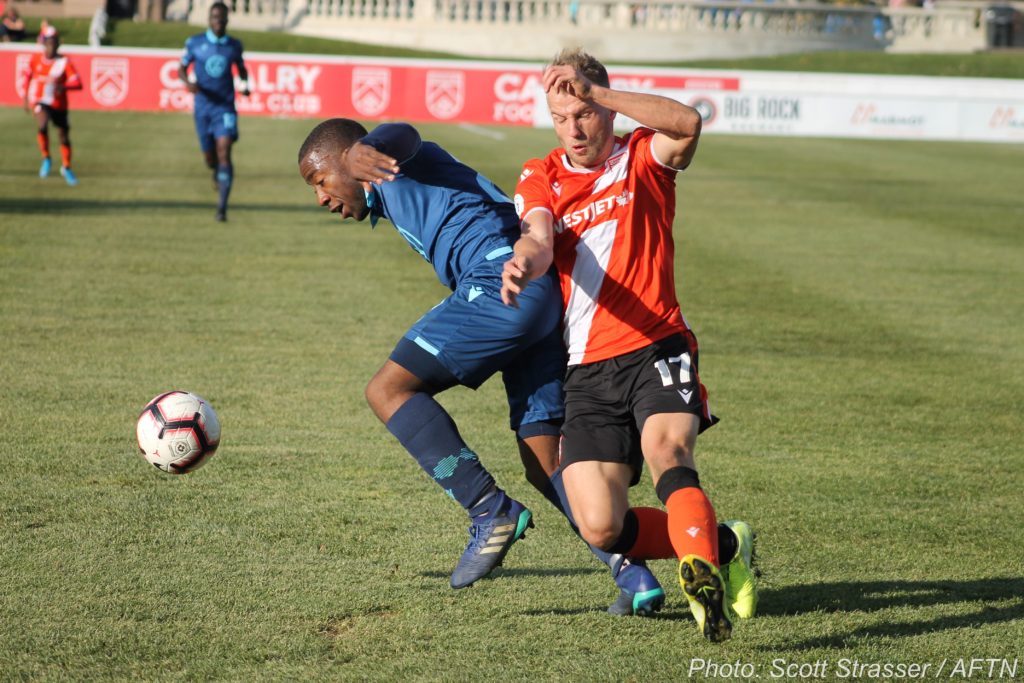