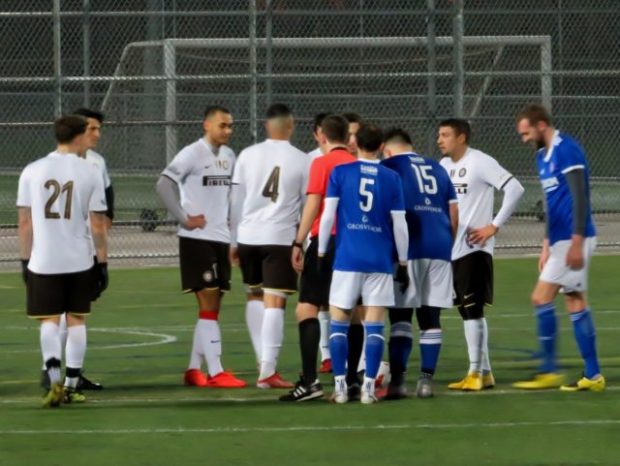 The Imperial Cup took centre stage this past weekend in Vancouver Metro Soccer League (VMSL) action with the four quarter-final ties producing 21 goals and a lot of talking points between them, with two of the matches needing extra time to decide the winner.

The action got underway in Coquitlam on Friday night as VUFC Hibernian headed to Cunnings Field to take on Metro Ford Wolves in what proved to be a more one-sided encounter than many expected.

Chris Fisher put Hibernian ahead in the 24th minute but Jadon Lashley’s sending off for a second bookable offence 12 minutes later hit Metro Ford’s comeback hopes hard. Sebastian Dzikowski put the visitor’s two up on the hour mark, and although Devin Phelin pulled one back for Coquitlam in the 74th minute, a goal from Bradley Richardson three minutes later restored the two goal advantage and Daniel Kaiser struck in the final minute to round off the 4-1 victory for VUFC and book their place in the semi-finals.

VUFC Hibernian had already clinched a Provincial Cup spot through their league play, but the UBC side have disappointingly decided to withdraw from that competition due to schooling and League1 BC preparations, opening up some hope to other VMSL sides for a berth in their place.

While that match was playing out, a wild one was taking place at Burnaby Lake as West Van FC needed an extra 30 minutes to see off a determined nine-man Inter EDC side.

It wasn’t a classic game but it was certainly a dramatic one, with all four goals being quality as the Amblesiders eventually came away with the 3-1 victory.

Kamyar Amini put West Van ahead with a low 39th minute free kick that nestled into the bottom corner amid Inter protestations about players near the wall. Their frustrations grew and the tackles were flying in from both sides with nine bookings and two sending offs coming over the 90 plus minutes of regulation time.

As the game headed into stoppage time, it looked like Amini’s goal was going to be enough to send West Van through, even more so when Inter’s Burhan Waisy was sent off for a second yellow in the 92nd minute and Alan Camacho followed for a crunching challenge two minutes later.

But Inter kept fighting and scored a dramatic last ditch equaliser seven minutes into stoppage time when Nikolas Papakyriakopoulos put one away from the edge of the box to send the Inter bench wild.

West Van had seemed happy to settle for the 1-0 win and had disappeared from being much of an attacking threat in that second half, but they stepped it up again in extra time, although nine-man Inter also had some quick forays forward when they could.

Inter’s resolve was finally broken in the 113th minute when Fergus McDonald’s long ranger flew into the net. Four minutes later and it was another long one from Keelan Eyers this time that finally ended it for Inter and gave West Van the 3-1 victory and a spot in the semis, boosting their hopes of making it into the Provincials in the process.

Quite the drama and you can watch our highlights of how it all played out on our YouTube channel HERE and on the video below:

It also took extra time to split BB5 United CCB and Croatia SC at Newton Stadium on Friday night, before the Premier champs booked their place in the final four as they look for the league and cup double.

Yassin Essa put BB5 ahead nine minutes in but two quick goals from Mario Kovacevic in the 39th minute and David Malamura two minutes later gave the visitors a 2-1 lead at the half.

Caleb Clarke brought BB5 level 10 minutes after the restart, but with no further goals the game headed into extra time, with the decisive strike coming from Ryan Sangha with just five minutes remaining.

There wasn’t any need for extra time to decide the last quarter-final of the weekend as Rino’s Coastal VSC ran out very comfortable 6-1 winners at home to MAFC Elite at South Surrey Athletic Park on Saturday afternoon.

Amazingly all the goals came in the second half of this one, with Jake Starheim opening the scoring for Coastal a minute after the restart. Isaac Kyei hit a brace in the 57th and 66th minutes to make it 3-0, before Sidrit Vukaj made it four with 15 minutes remaining.

Anthony Paiero pulled one back from the spot for MAFC in the 80th minute, but Gurminder Chattu saw Coastal go nap a minute later, before Taylor Richardson rounded off the scoring with two minutes left.

So all that action sets up the following semi-final matchups at Empire Fields on Saturday March 19th:

The league action returns this week, and there’s still a lot to play for in the season run-in with Provincial Cup placing and relegation issues still to be settled.

Here’s what’s on the slate this weekend: