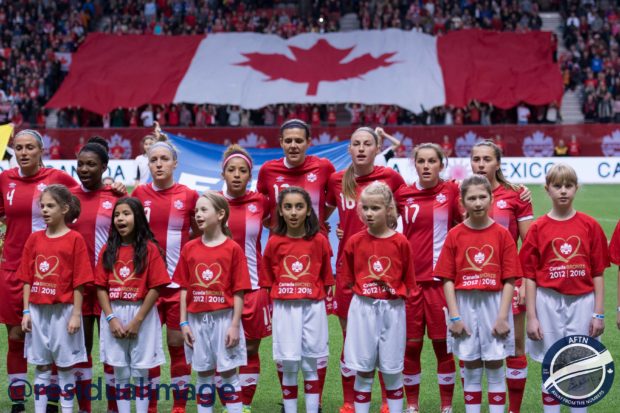 With the 150th birthday of Canada, we at AFTN decided to try to come up with a definitive list of best all-time Canadian soccer players on both the men’s and the women’s side. In order to do that we sent out invitations to a cross section of people that included media covering Canadian soccer, former players, and hardcore supporters of the national teams.

Each person ranked their top ten, with no guidance from us, and we allocated points (10 pts for 1st place, 9 pts for 2nd place and so on). Unfortunately soccer was never given enough coverage and had little mainstream following for years, so many players from the earlier days of the game are missed, which we’re sure will raise a few contentious omissions.

In this piece we look at the Top 10 in Canadian Women’s soccer and while there were tight races for the most part there should be no surprises who the unanimous number one is. The Men’s article will be up on AFTN later today. 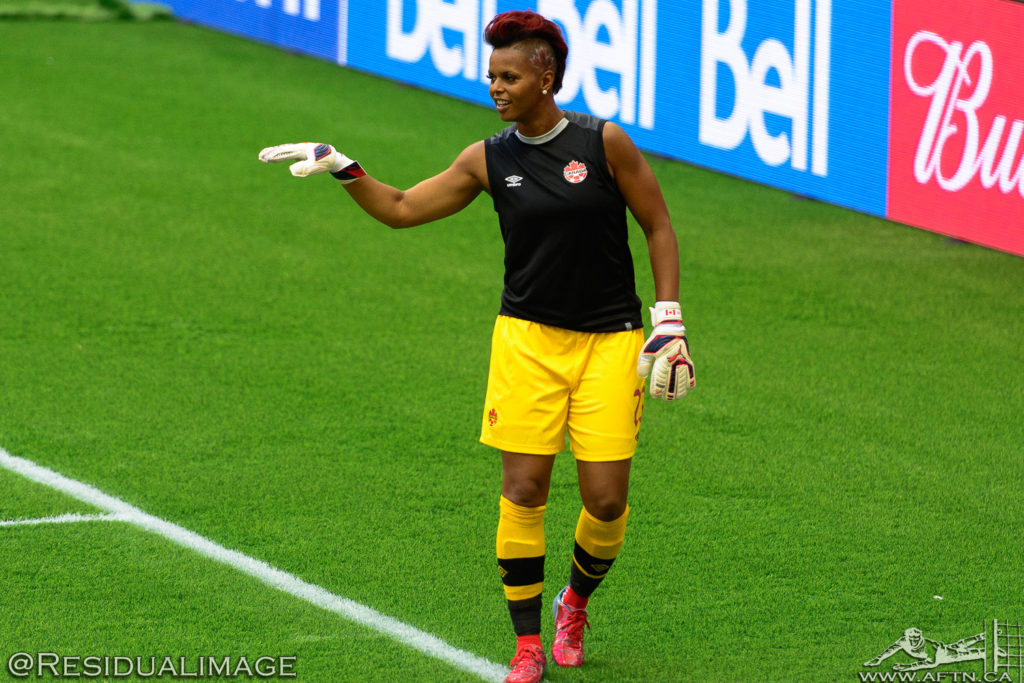 Raised in Dominica until the age of eight, LeBlanc relocated with her family to Canada. She played for a number of teams in North America across three separate leagues. Leblanc has been part of five World Cup teams, including the fourth place finish in 2003, is a two time CONCACAF champion, a Pan American gold medalist and a bronze medalist at the 2012 Olympics. She sits second in caps for Canadian goalkeepers but leads in cleansheets with 47. 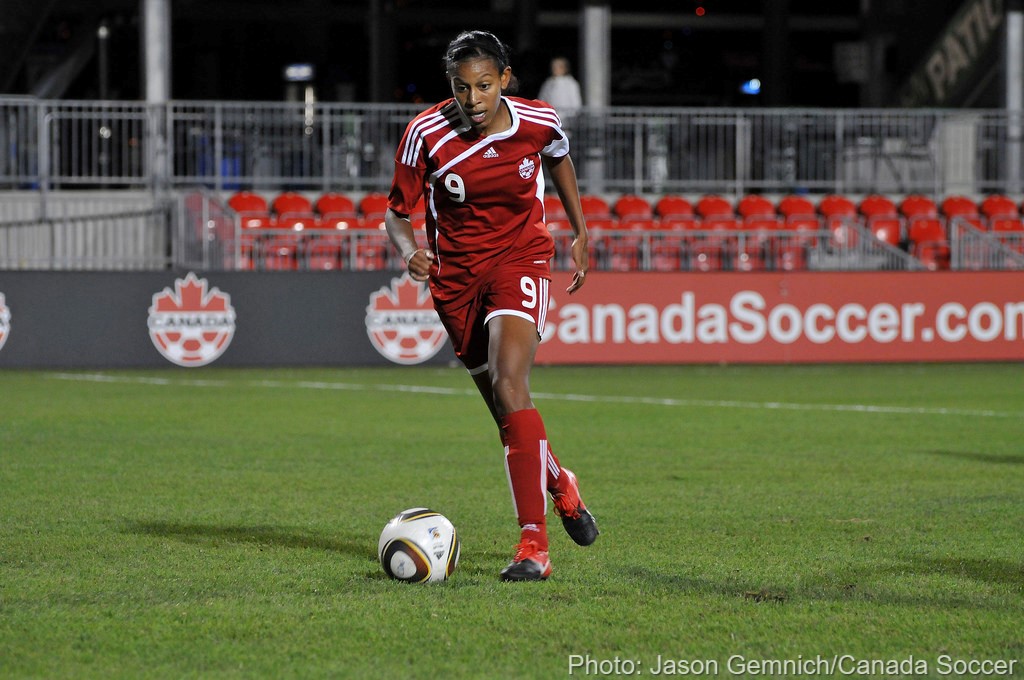 Born in Trinidad and Tobago, Chapman moved to Canada at the age of six. During her pro career she won three club championships with the first coming with Vancouver Whitecaps in 2006 and the other two coming in the WPS in 2010 and 2011. Chapman had a ten year career with the national team being part of the 2010 Gold Cup and the bronze medal squad in 2012. 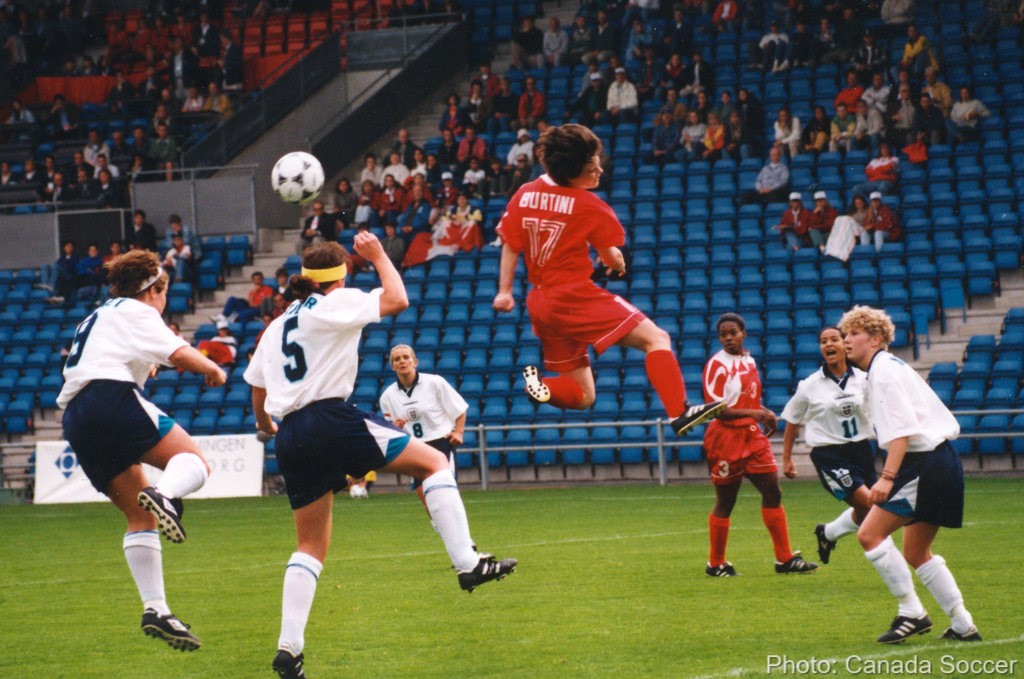 Burtini spent her pro career in the W-League with Raleigh and in the WUSA with Carolina. She was a member of three World Cup teams including the 2003 one that finished fourth place. She was also part of the 1998 CONCACAF championship team and was named Canadian Player of the Year that same year. Burtini retired in 2003 and still sits third in goals with 38. She was inducted into the Canada Soccer Hall of Fame in 2010. 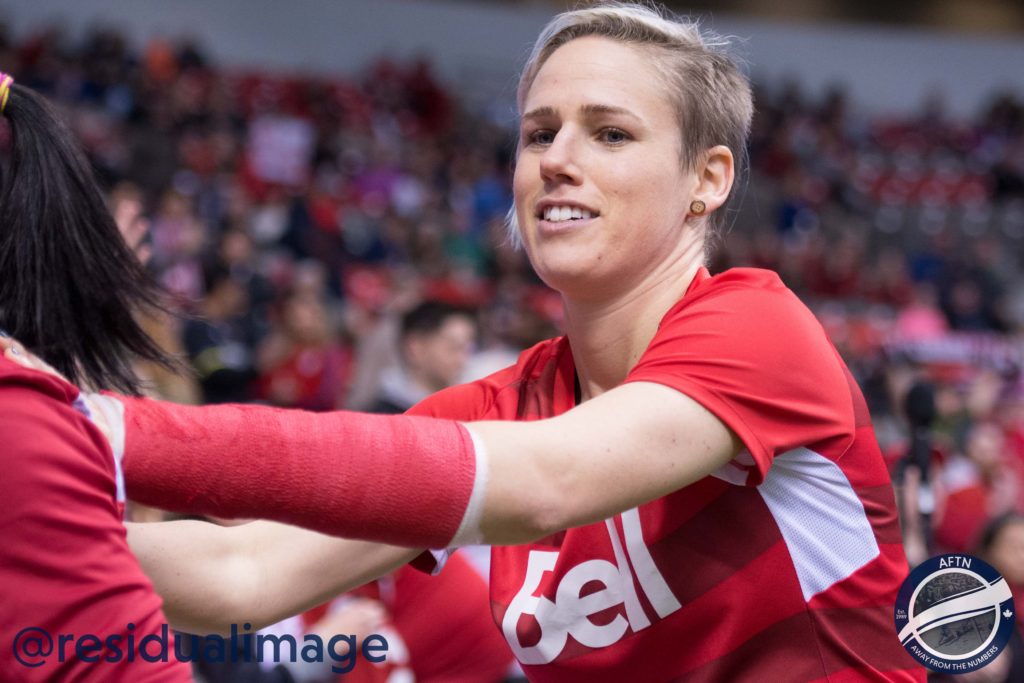 While playing college for the University of Portland, Schmidt played for Vancouver Whitecaps and was part of the 2006 W-League championship team. She has also played for clubs in Sweden and America and is currently playing in Bundesliga for FFC Frankfurt. Since making her international debut in 2005, Schmidt has made 163 appearances putting her fifth for Canada. She has been an integral part of both bronze medals at the Olympics as well as the 2010 Gold Cup and 2011 Pan American championship. 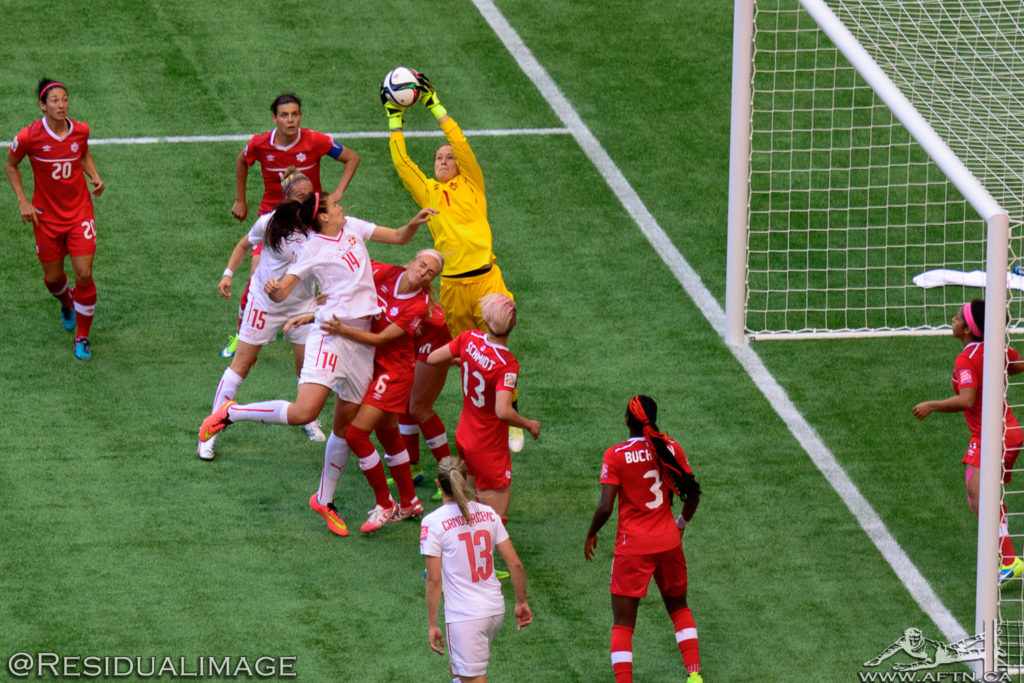 McLeod started her pro career with Vancouver Whitecaps and was the keeper for their two championships in 2004 and 2006. After that she has had short stints with a number of teams in America and Sweden. She made her debut in 2002 and shared goalkeeping duties with Karina LeBlanc. In 2012 she was the number one keeper for the Olympics and helped lead Canada to the bronze medal. She is the leader among keepers in caps and sits second in all-time cleansheets. 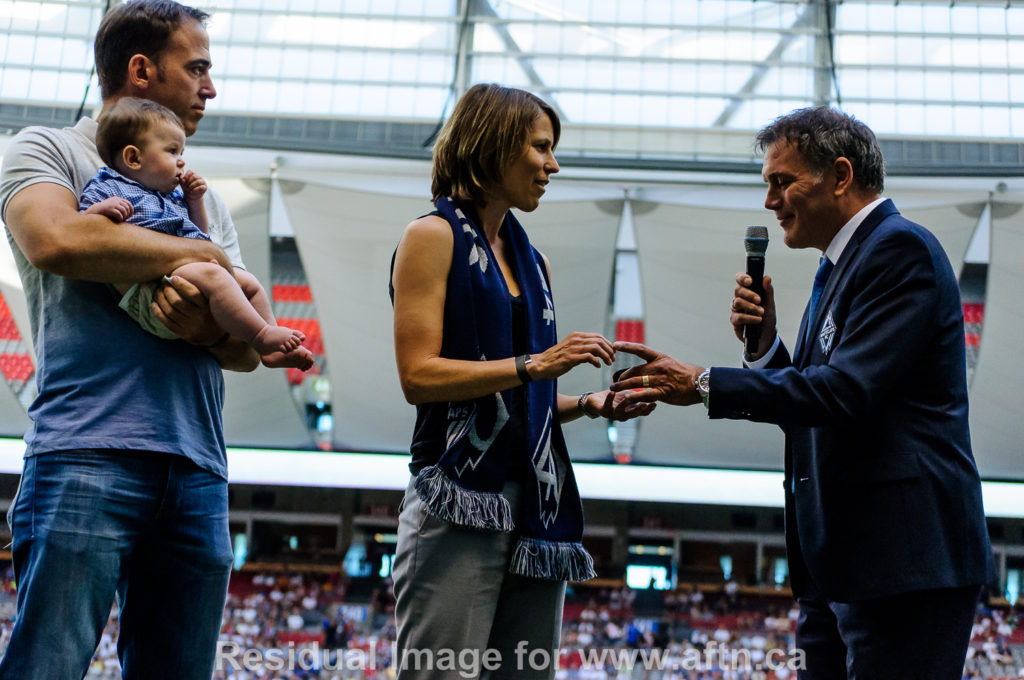 Neil played all of her pro career with Vancouver Whitecaps helping them to W-League championships in 2004 and 2006. She was the first Canadian to play in four World Cups including the fourth place finish in 2003. Neil was named Canada Player of the Year in 2001 and retired at the time as Canada’s all-time leader in caps. In 2011 Neil was the first woman and third soccer player overall to be inducted into Canada’s Sport Hall of Fame. The following year she was inducted into the Canada Soccer Hall of Fame. In 2014 she was inducted into Vancouver Whitecaps Ring of Honour, as part of their 40th anniversary celebrations. 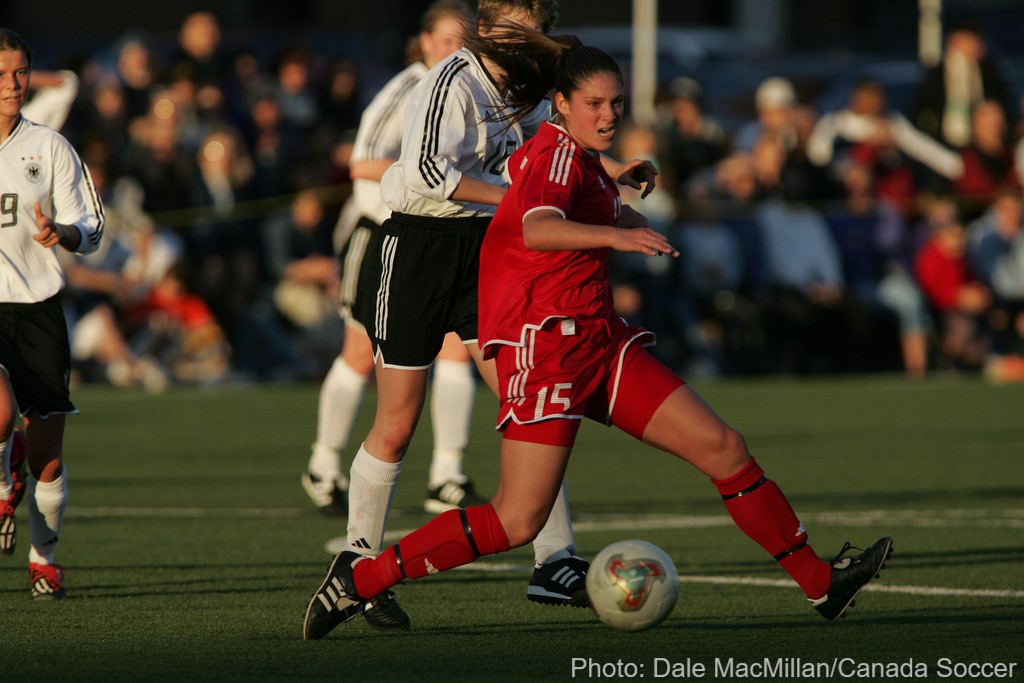 Despite a career cut short from injuries, Lang is still recognized as one of the top Canadian Players of all-time. After a distinguished college career at UCLA where she was rated as the number one recruit going in, Lang played professionally for Vancouver Whitecaps. Lang is the youngest women to play for Canada at 15-years-old, in 2002, scoring two days after her debut. She scored twice for the 2003 World Cup team that finished fourth in the tournament. Lang’s last of her 34 international goals (4th all-time for Canada) came in the 2010 when the national team captured the Gold Cup. She was inducted into the Canada Soccer Hall of Fame in 2015. 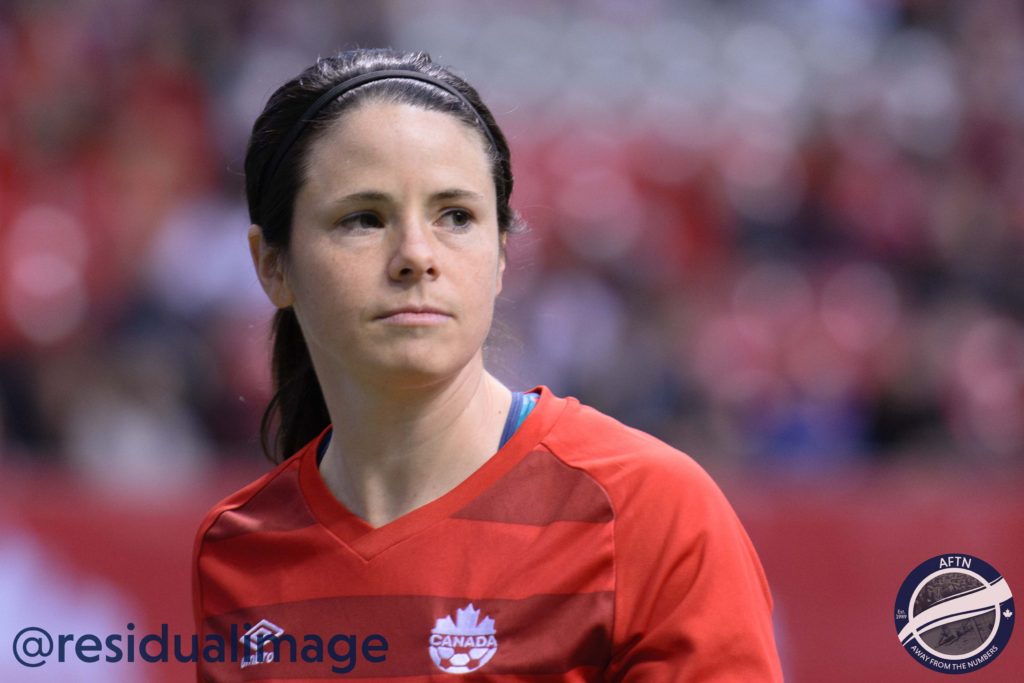 The bronze medal winning scorer at the 2012 Olympics started her career in Norway with Team Strømmen. Matheson returned to North America in 2013 to join Washington Spirit of the NWSL, where she holds the club record for all time goals and assists. In addition to her heroics in 2012, she was part of the teams that won the 2010 Gold Cup, 2011 Pan American Games, and bronze in 2016. She currently sit second for all-time caps and is in the top ten for goals. 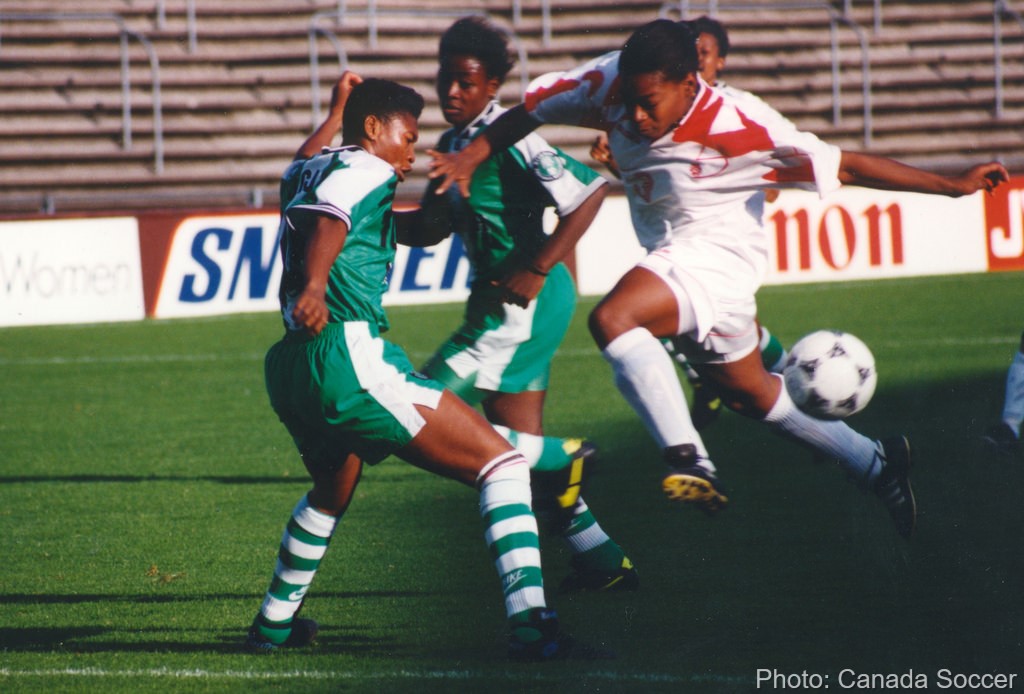 Born in Guyana, Hooper moved to Canada when she was eight, where she started to play youth soccer. Hooper played abroad in Norway and Italy but had the majority of her success overseas in Japan playing for Prima Ham. She would return to North America to play the rest of her pro career. On the international stage Hooper led Canada to its best finish at a World Cup in 2003 (4th place) and a 1998 CONCACAF Championship. When she retired in 2007 Hooper was both the leader in caps and goals for Canada. She was inducted into the Canada Soccer Hall of Fame in 2012. 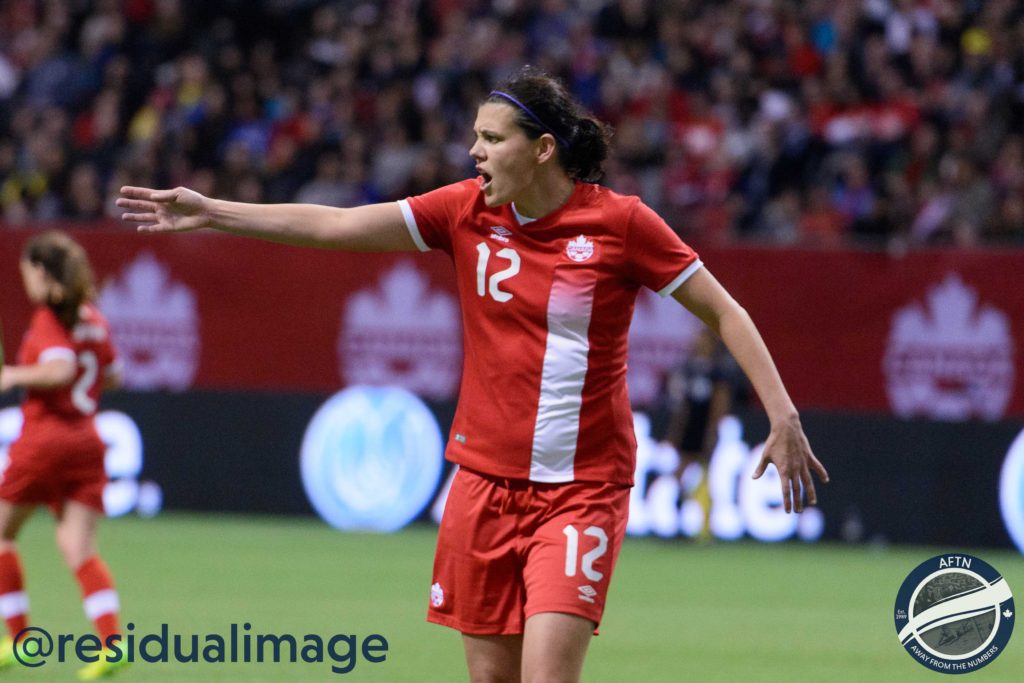 The all-time number one for the Canadian women started her pro career with Vancouver Whitecaps after an outstanding career with the University of Portland. Sinclair has led her club teams to four championships: one in the W-League (Vancouver), two in the WPS (FC Gold Pride and Western New York) and one in the NWSL (Portland). She has also won a number of individual awards. In addition to being a thirteen time Canadian Player of the Year, she leads the nation in goals with 168 putting her second among all women in international goals. Sinclair has also led Canada to wins at the 2010 CONCACAF Gold Cup, top spot at the 2011 Pan American Games and a two time bronze medal finish at the Olympics. She received the Order of Canada on June 30th 2017.