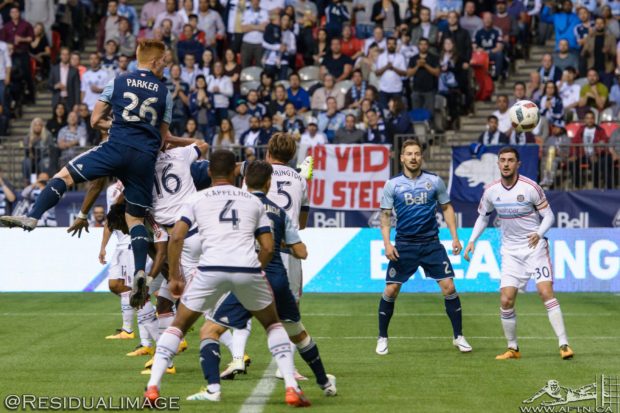 The season rolls on, and as sure as night follows day, it’s another tough away trip, this time to an Eastern Conference team. – Bastian Schweinsteiger’s Chicago Fire at Toyota Park.

Chicago spent their midweek in an instant US Open Cup classic. A frantic 0-0 draw with Alan Koch’s FC Cincinnati that ended in a 3-1 penalty shootout win for the USL side after the 120 minute deadlock. The match was played with a n available full strength Chicago side and at a pace that is rarely seen in any division in North America, which as many Whitecaps fans pointed out on Twitter, means it will be a physically and emotionally drained Chicago Fire side that lines up against Vancouver Whitecaps on Saturday evening.

For the Whitecaps, it will all be about fixing what went wrong in Minnesota as much as it will be trying to replicate the great first half. In the words of former England manager and playboy Sven Goran Eriksson: “First half good, second half not so good.” It seems that when the urgency drops, the Whitecaps seem to get overrun very, very easily. I suspect this has a lot to do with the amount of pressing Robbo has them do when they have a lead, but it could be a number of things.

There is some good news for the ‘Caps as they look to snap the nine match unbeaten run that the Fire are on in MLS play. Chicago will be without two key players in David Accam and Dax McCarty. Accam bagged a hat-trick in their last MLS game, and his absence will be a relief to Tim Parker and co, as Kendall Waston continues to recover from the injury he sustained while on international duty.

Andrew Jacobson is the most experienced player to fill the large gap left by Waston, although as a defensive unit, our defending from the wide areas need to improve significantly as we seem to have a destructive habit of leaving dangerous players unmarked at the back post.

Sheanon Williams has been cleared to play by MLS today but hasn’t trained all week nor travelled to Chicago. That avoids the tricky decision that Carl Robinson will have to make down the line between Williams and Jake Nerwinski for now. Nerwinski had an excellent outing against Minnesota last week and will be back in against Chicago.

The change I would like to see is Jordan Harvey rested. He has looked slow this season apart from a couple of fantastic games, and it may be time for the organization to think about this squad after the stalwart has moved on. The trouble is with Marcel de Jong and Sam Adekugbe away with the Canada (although the latter isn’t even back on the MLS roster yet), and Brett Levis still injured, there is no-one left to challenge him for the his starting spot.

The midfield has pretty much been picking itself these days with all the injuries the team has. Jacobson’s continuation in the back line and Russell Teibert’s heading off to be with Canada, changes will be made this week.

It looks like we could finally see Yordy Reyna for the first time. Robinson has indicated he will get the last 15 to 20 minutes of the match. This is exactly the kick that the team need as we enter a historically difficult period for the playoff hunting \Caps.

I expect to see Matias Laba, Tony Tchani, Cristian Techera, and Brek Shea starting. Bernie Ibini could be held back to freshen things up later in the game off the bench, but with a lack of alternatives for the middle, we could see him get the start, some positional shuffling, and maybe even get the nod over Fredy Montero, who is looking all sorts of frustrated.

The task of containing Bastian Schweinsteiger should fall to Laba. The World Cup winner will need to be followed at all times as his knack for finding space and creating chances has been all too evident since he joined MLS from Manchester United.

Despite what some fans have been saying, strikers are still an issue for this team. I don’t mean that statement as a slight on their character, but after three years of struggling to find a consistent goal scorer, I think it’s fair to say that the system needs to be tweaked to offer more support, especially now that we have found a groove in a sole striker formation.

Can we get enough support to the striker?

And who will that be playing up front?

Will the Fire’s nine game unbeaten streak come to an end due to midweek exhaustion?