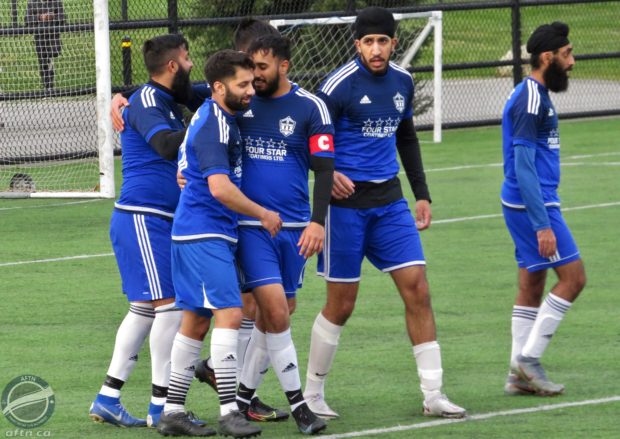 Guildford FC and VUFC Snipers set up an all-Vancouver Metro Soccer League (VMSL) BC Provincial B Cup final on Saturday after a couple of hard fought semi-finals last weekend.

The action kicked off at Newton Athletic Park Stadium on Saturday evening with a tantalising encounter between two teams that won their leagues with unbeaten seasons – Guildford FC from the VMSL and RASA’s Richmond All Blacks. In the end, it was a more comfortable 3-0 win for the Surrey side than many would likely have expected.

Harvir Padda, who has been in fantastic form the the Keith Millar B Cup this year, opened the scoring early for Guildford and they held that advantage going into half time.

A Dipinder Gill penalty eight minutes after the restart and a nice finish from Indervir Gill in the 58th minute put Guildford into cruise control and they easily saw out the last half hour or so of the match to book their place in this year’s B Cup final.

You can watch our second half highlights from the match HERE and in the video below:

The second semi-final played out at UBC’s Thunderbird Stadium on Sunday afternoon with a clash between VMSL Division 2A champs VUFC Snipers and VISL double winners Gorge-Us Guys.

It was a close one, as expected, with Snipers advancing thanks to an early goal, following a rebound from a corner.

Gorge threw everything at Snipers to find the equaliser but couldn’t get the breakthrough and it was the Vancouver side who moved on to this weekend’s final.

Van snipers take it 1-0. Credit to them a rebound off a corner early in the game. We were all over them hit the post and many quality chances. Good luck to them in the final!

It should be a tasty final between the two VMSL sides, and a rare Division 2 v Division 3 affair.

VUFC Snipers probably just head into it as the narrow favourites, following a dominant league season that saw them lose only one game and drop just seven points from their 22 matches, winning promotion to Division 1 next season by an 11 point margin. They scored 54 goals along the way, with Jose Luis Lillo Aleman adding 15 league and three cup goals for them in the VMSL this season. Defensively they gave up just 17 goals in league play, recording 12 clean sheets.

In this year’s B Cup run Snipers beat Burnaby side We’R United 3-1 in the Preliminary Round before getting past VMSL Division 2 Cup champs Vancouver Harps 1-0 in their First Round match-up. An 8-1 shellacking of FVSL Division 2 champions Mission SC followed in the quarter-finals and they rounded things off with that 1-0 win over Gorge-Us Guys in last weekend’s semis.

Guildford have also played four matches to get to the final, winning 4-0 at Langley Utd Dynamo in the Preliminary Round then 1-0 at BMSA side Coasters FC in the First Round. Two Richmond sides were next up for the Surrey lads, with a 2-1 quarter-final win over West Coast FC in the quarters and last weekend’s 3-0 win over Richmond All Blacks in the semis.

Guildford FC played in Division 3B of the VMSL this past season, winning promotion to Division 2 with an undefeated record of 17 wins and five draws from their 22 matches. They scored a stunning 90 goals, with Dipinder Gill hitting 22 and Indervir Gill adding 10, and they only gave up 11 goals all year, keeping 12 clean sheets. They also made a run to the Division 2 Cup final, narrowly losing out 2-1 to Vancouver Harps.

It’s hard to really know how this one will play out. Both teams can score, both teams can keep the ball out of the net. Will it be a wild, end to end match or a cagey affair? Find out at Burnaby Lake at 12.45pm on Saturday or watching all the action live on BC Soccer’s YouTube channel HERE.