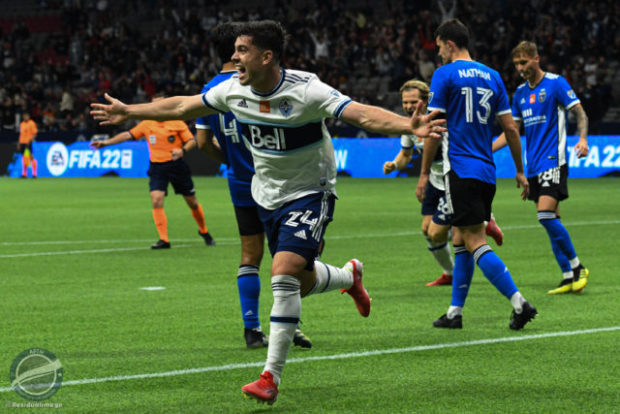 It wasn’t the most exciting soccer, but the Whitecaps took care of business against Valour FC on Wednesday to advance to the quarter-finals of the Canadian Championship and have now won two in a row for the first time this season after scraping out a win against Toronto last weekend.

The homestand continues on Saturday afternoon against San Jose, a team who the ‘Caps are looking to leapfrog in order to climb out of the league’s basement. This is quite the busy time for the ‘Caps, as they have embarked on a stretch that will see them play eight matches in just 28 days. It’ll be a big test for the squad and they’ll be thankful at least that five of those matches are at home.

The ’Caps have been solid at BC Place this season with a 3-1-1 record in all competitions and just three goals conceded (all in the 3-2 loss to Portland). Of course, they’ve only scored six times themselves, and haven’t played the strongest opponents overall, but it’s something to build on! The club’s strong home form last season is what propelled them to the playoffs, and if they are to get anything out of this season in MLS play, they’ll have to do the same this year.

Lineup rotation will be one of the biggest topics of conversation for the next few weeks, as it certainly isn’t realistic to expect the same starting lineup for all of these upcoming matches. Cody Cropper will more than likely be starting all of them with Thomas Hasal hurt, but otherwise the only player who might not get rotated is Ranko Veselinović, who the ‘Caps have leaned upon heavily to be their workhorse at the back.

Érik Godoy was strong in his return to action last weekend, but will likely just be an every-other-match player for this busy stretch in order to manage his fitness levels. He and Veselinović appear to be the top-choice centre-back duo, while Javain Brown is likely to start at right-back with Jake Nerwinski filling in on the left until at least one of Cristián Gutiérrez or Luis Martins are ready to play.

Along with Veselinović, the other workhorse so far this season is Russell Teibert who has started every match in the middle of the park. His physical fitness has always been one of his strongest attributes and at least for this weekend he’s likely to keep his place in the lineup next to Sebastian Berhalter.

A bigger issue for the ‘Caps is the fact that Ryan Gauld has now joined Tosaint Ricketts in health and safety protocols, making him unavailable for this weekend. Gauld has looked more like his 2021 self since returning from his concussion, so this comes at a pretty terrible time, especially if he has to miss multiple matches.

Gauld’s absence opens the door for Pedro Vite to try and serve as that creative force, while Déiber Caicedo and Cristian Dájome will also be relied upon more to create attacks. Lucas Cavallini actually did some creating of his own against Valour and given his re-energized play the last couple matches could be in line for the start over Brian White on Saturday.

Looking at the visitors, the Quakes are just above the ‘Caps with a 2-5-3 record, and are 0-4 on the road in MLS play. They have picked up since Matias Almeyda left the club, however, winning three of their last four matches including a penalty shootout win over Seattle in the US Open Cup on Wednesday.

San Jose has used a pretty consistent lineup this season, with six players who have started every MLS match – by contrast the ‘Caps have just three, including Hasal who will drop from that ledger in this match. Ján Greguš, formerly of Minnesota United, leads the team with five assists while Jeremy Ebobisse, another more recent addition, leads the Quakes with five goals.

A win this weekend would push the Whitecaps over San Jose and potentially a couple other teams depending on how out of town results shake out. It would also cement the new formation (four at the back in defence and closer to three in attack) as the way forward. We’ll see if they can hold serve at BC Place for the third time in a week.