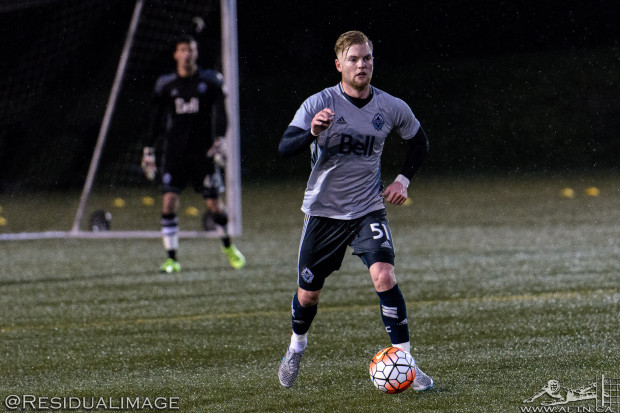 Vancouver Whitecaps’ certainly have a keen eye when it comes to scouting and developing centre backs. Christian Dean, Tim Parker and, most recently, Cole Seiler have all come to the ‘Caps MLS squad through the draft, with Canadian homegrown talent Jackson Farmer coming through the Residency and currently developing his game in USL with WFC2.

It’s perhaps the strongest position throughout the entire club, and the latest player to join those already stacked ranks is 21-year-old Dutch centre back Sem de Wit.

De Wit signed a contract with WFC2 in February and just two games into the USL season, he already looks to be another fantastic and exciting addition to the centre back collective. It’s been a bumpy journey to Vancouver for the Dutchman but now that he’s here, he’s looking to grab this new opportunity with both hands.

Having come through their youth system, De Wit signed his first pro forms with Dutch second tier side Almere City as a 17-year-old, making 24 appearances in his debut season back in 2012/13.

After moving to fellow Eerste Divisie side FC Dordrecht for the last half of the following season, de Wit was transferred to Eredivisie side ADO Den Haag in the summer of 2014 before being loaned back to Dordrecht for the 2014/15 Dutch season and then to Fortuna Sittard for the current season.

A lot of bouncing about for a young player, the perils of the game in Europe, and it was that in part that led de Wit to consider pastures new. With many young North American players dreaming of making a move to play in Europe, it’s unusual to see a talented Dutch player heading the other way at such an early age, but for de Wit he felt the timing was right and he’s delighted to have landed in Vancouver with WFC2.

“I thought about it. I had a good chat with my parents, with my brother, everything. It was a good move to come here at this age. I’ve just turned 21. It’s a good experience for me. A huge adventure. I’m far from home but I deal with it and I’ve done well so far. So far it’s good.”

He might have three years worth of experience under his belt as a pro, but de Wit’s journey to Vancouver didn’t start in Holland, but on the internet.

Like many players today, de Wit had put together a You Tube video showcasing his talents. If you ever wonder if those actually work, well, turns out they do.

After having a trial at English side Walsall, de Wit found himself packing his bags and heading over the Atlantic to try out for WFC2 at their November offseason camp. The rest is history and it all started from that video compilation.

“An agent in America, he saw my video on You Tube and he contacted my brother,” de Wit explained. “He has some contacts with the coach [Alan Koch]. They saw my video and they thought that was enough for a trial. In the trial, that’s where you have to prove yourself.”

And that he did, earning a USL contract and impressing head coach Alan Koch in the process.

“He’s got so many different attributes,” Koch told AFTN about the Dutchman. “He’s a great footballing centre half, so we can play out from the back with him. But he’s also a very good physical presence. He’s not afraid. He’s not going to shy away.

“Literally, in the last five minutes of the game against Orange County, he made one of the best blocks I’ve ever seen in the game. He threw his body in and helped us get the three points there. So he’s got lots and lots of different attributes and his character is fantastic. He’s a guy we love to have around and you can tell his teammates love to have him around too.” 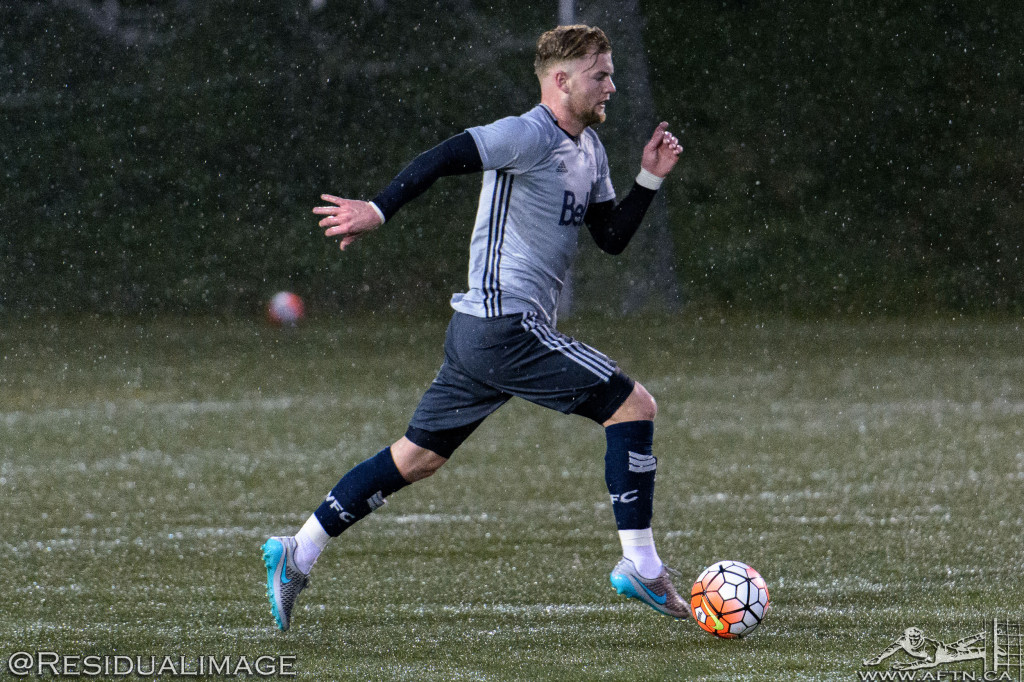 Dutch players are known across the world for their technical abilities and de Wit is no different. Playing with the ball at your feet is taught at an early age, no matter what your position, and it’s an aspect of his game that both Koch and de Wit feel will help the Dutchman thrive in North American soccer.

“Everyone in Holland is good on the ball,” de Wit said. “That’s a huge win for me here. I’m good on the ball and I can defend well. I win a lot of headers but I was taught how to deal with the ball.

“As a centre back, I’m good with the ball and that’s a strong point for me because of how the Whitecaps want to play. They want to play through the lines, not the long ball. That’s a good thing for me because I can play from the back and start some good plays.”

De Wit has already made a strong start to his Whitecaps career, starting and playing every minute in WFC2’s two road wins to kick off the new season. You never know when players come here how soon it will take them to not only adjust to a new league, but also their new surroundings away from the pitch. In de Wit’s case, he’s settled in pretty quick.

“It’s great now actually, with the sun,” de Wit laughs. “No, it’s a great city. It feels like home now. The first few weeks was just getting used to everything. Now, with the team, we win two in a row, we do well. We do well with each other. We train well every day, try to get better every day. I feel good here.”

De Wit didn’t know too much about the USL before heading over here for his trial in November, but with two games now under his belt, he likes what he’s seen of the league and has been impressed by the quality on display.

“It’s good, it’s good,” de Wit says. “I was a bit surprised. In preseason, with all respect, we played the universities, so when you play the first game against Orange County, after you get used to it in the first ten minutes, it’s a different level. They’re big and they’re strong and athletic. It’s a good level, especially for young guys here with WFC2.

“If you do well, you can make the step [up] or not. I think it’s a good start for young players. Like now, some players from the first team, they came down, and they do a great job with us, and you see that they’re motivated, they want to play, they’re good with us, they train well. I think that’s important. If everyone does well, the level is getting higher and higher.” 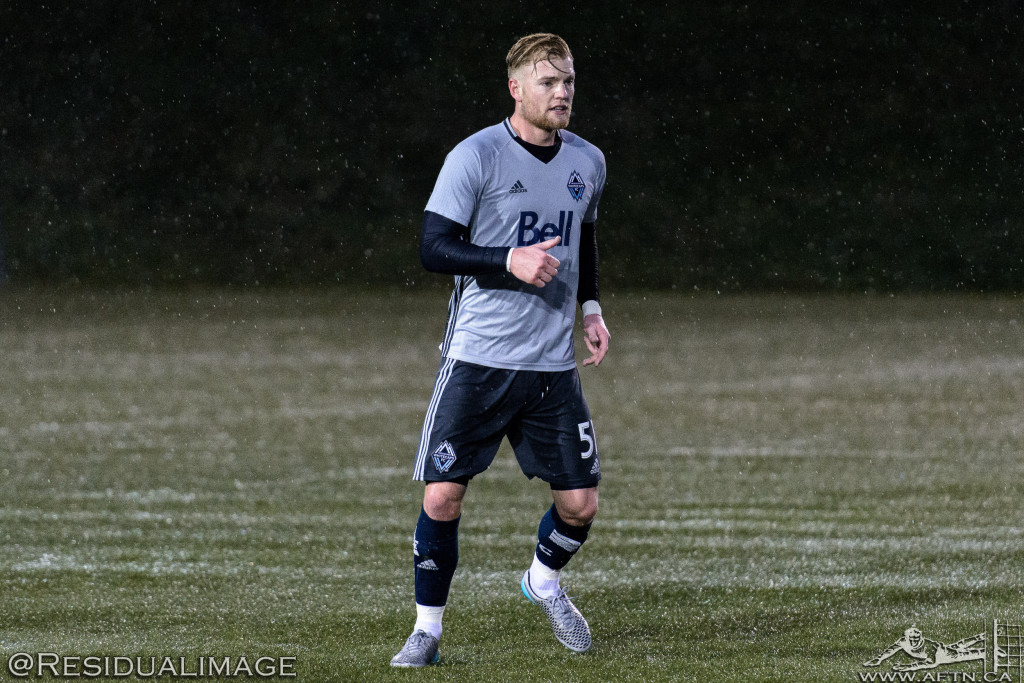 With a 1-0 win at last year’s Western Conference champions, Orange County Blues, in their season opener, and a comprehensive 3-1 defeat of Cascadian rivals Timbers 2 last Saturday, WFC2 are already looking to be a much stronger proposition to last year’s debut effort. It’s a start they’re hoping to continue to build upon in this Sunday’s home opener against Sacramento Republic [Kick off 3pm at Thunderbird Stadium].

The two key factors of that so far have been the excellent striking partnership of Kyle Greig and Daniel Haber, and a much more rock solid defence. De Wit can take a lot of credit for the latter, marshalling the middle of the backline in both games, and with two different defensive partners alongside of him – Farmer against the Blues and Seiler against the Timbers.

With all the other new aspects for de Wit, you’d think having to build chemistry with so many different centre back partners would take some time, but like everything else, the Dutchman just takes it in his stride and understands it’s just part of playing with a developmental team.

“It’s just part of your job,” de Wit told us. “You train with the guys all the time, so it doesn’t really matter if you play one week with Jackson, the next week Jackson maybe plays with Cole or I play with Cole, or I play with I don’t know who else.

That attitude exemplifies what Koch means when he enthuses to us about the young centre back’s character, and it’s one which both coach and player feel will be crucial if de Wit is to fulfill his ultimate goal in coming over to Canada – a move up to playing in Major League Soccer.

The clear pathway from USL to MLS was what sold de Wit on signing with WFC2 and he has a clear hunger to do everything he can to achieve it.

“At the end of the day, my dream is to play in MLS,” de Wit admits. “You start in the USL and you try to make the step to MLS. That’s what every young player wants to do. It’s the same everywhere, in Europe, here, if you do well, you’ll get your chance.

“What you have to do is to train every day as hard as possible, try to get better every day, play well every game, so that at the end of the day, you can look in the mirror and say, yeah, I did everything to do what I can to make MLS. If it doesn’t work out then I did everything that I could.”