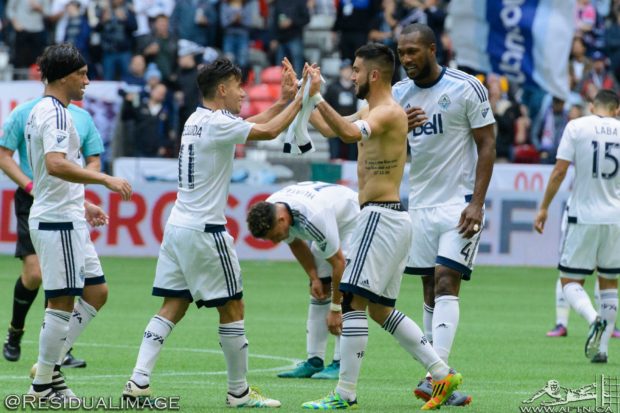 Last week we ran our 2016 Keep, Trade, or Release player analysis feature, looking at all of Vancouver Whitecaps’ MLS squad.

We did it a little bit differently this season, from an editorial point of view as opposed to a consensus of our writers like in years past, and senior AFTN writers Steve Pandher and Aaron Campbell were keep to pen pieces with their own takes.

We don’t just want to run a slew of these end of season analysis articles, but there’s some different opinions amongst the team, so we’ll be running these over the next two days under our new “In, Out, On The Bubble” banner, kicking things off with Steve’s piece today.

I know what you’re thinking. David Ousted, on the bubble. You mad bro? Ousted is a player who will happily forget the 2016 season considering how fantastic he played the year before. His return should be based on if the ‘Caps feel he can rebound and whether his salary in a cap world will be worth taking that risk. Paolo Tornaghi is an above average keeper but his time is most likely done, especially with the impressive play of Spencer Richey at the USL level. Marco Carducci is still young, in keeper years, with plenty of potential and will benefit with a full season as the starting keeper of the USL team next season.

Being named the most valuable player there is no doubt that Jordan Harvey will be welcomed back to the left side of the backline. Behind him are two young players who will return, in Sam Adekugbe, currently on loan until next June, and Brett Levis, who made his debut in the season finale and should see some time with the first team next season. The right side had issues over the season but it seemed like Fraser Aird was slightly ahead of Jordan Smith. There is a possibility that two newcomers are signed and Aird is moved to a wing position. Marcel de Jong was signed when the loan for Adekugbe was arranged but in the limited time he’s had, it was clear that he is past his prime and will most likely not return to Vancouver.

The centre of the backline has question marks but the two players who should return are Tim Parker, after his first season as a regular starter, and Cole Seiler, after his first season in MLS. Kendall Waston has struggled this season, and now starts the 2017 campaign with a suspension after his altercation with Fanendo Adi at the weekend. Will the ‘Caps consider a significant offer from a club outside MLS since he has impressed with Costa Rica in World Cup qualifying? Any potential sale of Waston could also affect the status of David Edgar and whether he returns to the club next season. Christian Dean has suffered through a difficult injury plagued season and his return could depend on whether he wants to come back on a non GA deal or get a fresh start somewhere else.

This was the position where the ‘Caps looked to be at its strongest but may have been the reason for their downfall this year. Vancouver’s captain and highest paid player Pedro Morales lacked any consistency and wasn’t able to play the number 10 spot, which he was brought in to do, making him an easy cut as they look to bring in a more dynamic central attacking player. Last year’s regulars at the holding positions, Matias Laba and Russell Teibert, didn’t play to their levels for different reasons, while Gershon Koffie departed to New England. Laba seemed to keep getting caught out of position, which exposed the backline, while Teibert wasn’t able to get on the pitch, due to Morales playing in his spot, and then ended the year injured. If the club receives a decent offer for Laba, they may consider it if they feel the Argentine has reached his peak value.

After acquiring him early in the season, many felt that Andrew Jacobson was the better option beside Laba, while Nicolas Mezquida has provided a high work rate when called on whether centrally or playing wide. Both are on reasonable contracts which makes their return more than likely. Both Marco Bustos and Ben McKendry impressed at the USL level and will look to get more minutes with the first team while Kianz Froese started to show something late in the season. Deybi Flores was sent to Honduras on loan and may remain there on a full time basis.

While there was certainly some letdown from the strikers, the wide attacking players had more of an impressive year as a group. Before his injury Kekuta Manneh was looking to emerge as the club’s most dangerous weapon, while Christian Bolanos provided good attacking options from the right. Last season’s surprise, Cristian Techera, regressed in his second year and provided little when called on to start, which could see him go allowing the club to use his large cap hit in other positions. The organization saw the emergence of a potential future star in 15-year-old Alphonso Davies but they don’t want to rush him into the spotlight considering his age and the pressure that would thrust on him.

This was likely the most disappointing aspect for the Whitecaps as it was where they spent most of the money last offseason. While I don’t believe there is one player guaranteed to return, one of either Masato Kudo or Giles Barnes could be on the roster in 2017. It will depend on which of them will fit with the new striker that will be brought in. They both have negatives as Kudo is an international and Barnes has a high price tag for next season. Erik Hurtado could return if the ‘Caps think of him as their number three striker, with the fourth spot on the roster going to a younger striker with upside. Blas Perez has not received the playing time that fits the amount he is being paid so expect him to move on.